Ian Williams: Should we wish that the world would shut down every year? How could it happen again? And what would we do with all our time? 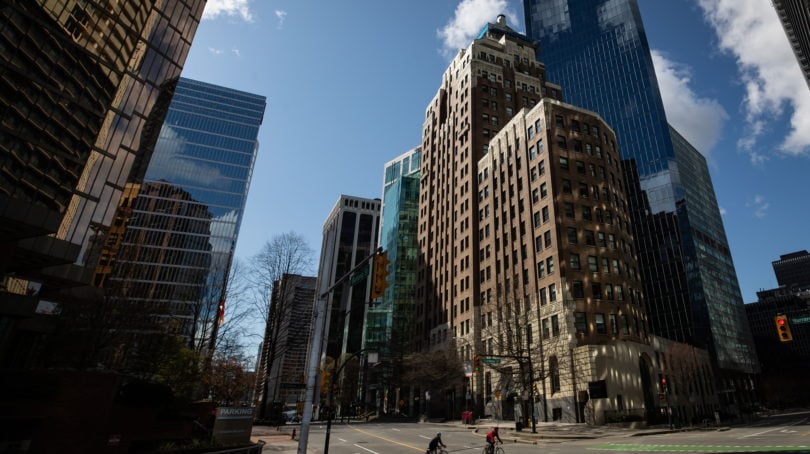 Cyclists ride on an empty street near the waterfront in downtown Vancouver, on Mar. 29, 2020. (Darryl Dyck/CP)

This is part of a series of essays from Canadian authors on the coronavirus and how it affects our lives.

Ian Williams is the author of Reproduction, winner of the 2019 Scotiabank Giller Prize.

What if the world shut down every year for an extended period?

Let’s say the Canadian government decided to close schools and workplaces, curtail commercial activity, and unleash a $52 billion package—a stimulation package, not a stimulus package—for the wellbeing of its citizens, not just banks. We could prepare in advance. We’d know, Oh, it’s April. Time to stock up on pasta. We’d hunker down at home and read books, assemble puzzles with our family and friends, hike through public parks, ride bikes through the carless cities, play tennis and ball and street hockey. And while we wouldn’t be restricted to our homes, we’d be encouraged to stay green and consider the environmental costs of travel. Introvert bonus: no gatherings over 25 people.

That’s a spin on a familiar scenario. Not the reality immediately in front of us. The promise of industrialization, automation, and most recently, artificial intelligence, was to open up vistas of free time for us to enjoy other pursuits, to attain a higher consciousness. The little Roomba robot was supposed to vacuum under our feet while we read Crime and Punishment on the couch. To my knowledge, that hasn’t happened. How’s your symphony coming along, anyway? Are you levitating yet?

Lovely as it sounds, the annual global break might actually be like enforced nap time. When my brother and I were kids and my parents wanted a nap, they would make the whole family nap, sometimes on the same bed. If my brother and I were acting up, my mother would separate us, one on each side of her, then she’d lock us under the cage of her arms while she slept on her stomach. That was my introduction to social distancing. And politics: One simply can’t force a group of people to do anything, including rest, even if it’s seemingly for their own good.

The idea of leisure is thorny. If leisure means sitting around watching TV all day, then too much leisure might be bad for us. The brain, body, and morale crave work, exercise, and stimulation in reasonable doses. And, of course, our current concepts of leisure are only available to certain privileged groups. Free time is a luxury when freedom is not yet secured.

The only true vacation I’ve ever had was to Margarita. It’s a tiny island north of Venezuela. I was seven. I wouldn’t call my trips to Europe vacations; the first was a rite-of-passage backpacking trip and the second was to attend a wedding. But sure, fine, whatever, one can convert any trip into a vacation. With enough determination, one can convert COVID into a staycation. Only “Corona” is not the name of a cruise ship in our living rooms. Many of us are still working, just from home. We check death counts alongside our email. Our relationships are strained. Somewhere a novelist is working on Love in the Time of Corona.

But what would it take for the world to shut down every year?

A major technological failing of the kind we feared in Y2K. The collapse of the power grid. Simultaneous natural disasters. Terrorist activity. A pandemic, of course. War. A terrorist-pandemic-war or biological warfare. In a time where war seems to happen and remain contained elsewhere, people everywhere now have an indication of what biological warfare would feel like. Imagine a cell of virulent extremists, already committed to their own suicide, quietly showing up in Montreal, Toronto, Calgary and Vancouver and giving away chocolate samples with their ungloved hands in a mall. Sounds like a fiction plot.

My most irascible tennis partner said that this coronavirus lockdown felt like practice for something worse that was coming. This was on the day that police tape appeared around public playscapes, basketball rims disappeared and tennis courts were shuttered.

“Like the government is using this to see how we’d act when the big one comes,” he paused. “I know I sound like a conspiracy theorist.”

I didn’t mind. What are conspiracy theorists but people who believe their own believable plots?

Is there something worse than biological warfare? Could you imagine a global shutdown? A time when governments exert control over businesses and borders, for more ideological purposes? Picture a group of people who disavow an emerging, popular, dominant ideology, one that is linked to nationalism. Those dissenters are branded as traitors and face sanctions to their ability to travel, work, buy and sell. They might as well be imprisoned. That plot resembles totalitarianism. All it needs is a strongman, an ideology, and the fabrication of an antagonist.

Thinking about the coronavirus as a drill or a harbinger is problematic. Because a drill is by definition preparatory—it is shadowed by the spectre of future calamity. And without a calamity, it is simply a reminder and rehearsal of our state of fear.

But I think our most immediate threat, apart from disease itself, is the risk of permanently damaging our relations to each other. After the shutdown, we will hesitate before hugging another person. We’ll press close when we see someone approaching the elevator. We’ll permanently don masks while ironically pitying a Muslim woman’s niqab. The drive to self-protect could well blinker us from the needs of others, if not cause us to vilify strangers outright.

From our relative safety, the worst plot has happened to one of my single friends. He ran out of toilet paper—gasp. I offered him some. Phew. He’s a young, handsome, baller-height Black man, the combination of whose features might prick alertness in covert racists, though he is, in fact, gentle with his large hands and soft-spoken to the point of being silent. When he came over to collect the toilet paper, he was dressed completely in black but with white sneakers, a very fashionable look these days.

He said, “This is the first time I’ve seen someone in person in two weeks.”

I had laid out four rolls of toilet paper for him. He took two and hugged them to his chest.

I could have bought more toilet paper when this all started, he said, but I wanted to leave some behind for other people.

I stacked the remaining two rolls in his arms. I said, “Now you get them for free.”