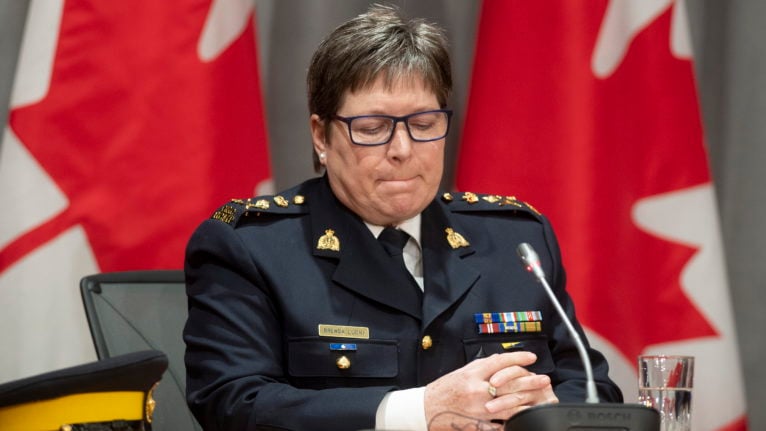 RCMP Commissioner Brenda Lucki is seen during a news conference in Ottawa on Apr. 20, 2020. (Adrian Wyld/CP)

The COVID-19 pandemic has not stopped the anti-Indigenous racism within the RCMP. Commissioner Brenda Lucki has lead the RCMP for over two years and has done little to stop the racial profiling, harassment, over-arresting, brutality, sexualized violence and deaths of Indigenous peoples at the hands of RCMP. This racialized violence has continued against the backdrop of massive protests against police violence towards Black and Indigenous peoples in the United States and Canada over the last few weeks.

A growing number of graphic videos and photos have displayed the violence associated with unchecked police racism. While many Canadians were shocked by the gruesome accounts, RCMP Commissioner Lucki’s first response was to deny systemic racism exists in the RCMP, leading Indigenous peoples and others to call for her resignation.

Lucki’s view that systemic racism doesn’t exist in the RCMP, was one not shared by Prime Minister Trudeau or his cabinet members who all expressed some level of concern over the brutal beating of unarmed First Nation Chief Allan Adam by multiple RCMP. Lucki later attempted to backpedal by clarifying that systemic racism does exist within the RCMP, but in the form of institutional structures that have created unintended barriers, instead of the widespread violence against Indigenous peoples documented in so many reports. She also promised to ensure that actions that are not in line with RCMP core values will not be tolerated. But that is exactly the problem. The RCMP’s culture and core values are racist.

MORE: The Nova Scotia shooting encapsulates all that’s wrong with the RCMP

Today, the RCMP operate in much the same way as they did historically, to police and prevent traditional economic activities like gaming and tobacco while providing support to other federal enforcement agencies like the Department of Fisheries and Oceans to deny us our Aboriginal and treaty rights to fish. RCMP even collaborate with CSIS and Indigenous Affairs to engage in racially targeted and unconstitutional surveillance of Indigenous peoples. They then share this information with the extractive industry.

The RCMP have taken their bias against Indigenous peoples even further by acting like private security forces for the extractive industry, when they show up with tanks, helicopters and heavily armed SWAT teams to remove Indigenous peoples from our lands. Their culture of corruption evidenced through the “blue wall of silence”, where police officers don’t report other police officers, commit perjury or falsify evidence, combined with their racialized violence, makes for a lethal combination.

MORE: Heather O’Brien was murdered in the Nova Scotia shooting. It took the RCMP seven hours to tell her family.

On Jun. 13, New Brunswick RCMP tasered and then shot 48-year-old, Rodney Levi from Metepenagiag First Nation, resulting in the second death of an Indigenous person in just nine days. On Jun. 4, Edmundston police shot and killed 26-year-old Chantel Moore from Tla-o-qui-aht First Nation in British Columbia during a wellness check and three Indigenous people were killed by Winnipeg Police Service during the pandemic. In May, Abraham Natanine from Clyde River was shot and killed by Nunavut RCMP. A month before that, on Apr. 12, Everett Patrick died after a violent arrest by RCMP in Prince George. The Independent Investigations Office reported that he was treated for injuries sustained from a violent arrest involving police dogs, but he was later transported to the hospital where doctors found bleeding in the brain⁠. Add to this the letter from the Legal Services Board of Nunavut noting the “persistent racism” of the RCMP towards Inuit women that has resulted in numerous incidents of police abuse, unnecessary and excessive violence, and “humiliating and degrading” strip searches. The RCMP, like other police forces in Canada, are responsible for killing Indigenous peoples at disproportionately high rates.

Brenda Lucki was named as RCMP Commissioner in March of 2018, at a time when the RCMP was imploding from numerous scandals. Prime Minister Trudeau and then Minister of Public Safety Ralph Goodale championed Lucki as the right person to address workplace harassment within the RCMP. Lucki was also heralded as the one who could address racial bias, violations of civil liberties of Canadians, and the many allegations of abuse of power within the RCMP. She promised then that “no stone will be left unturned” in her mission to fix what wasn’t working in the RCMP. She then promised the National Inquiry into Murdered and Missing Indigenous Women and Girls that the RCMP would do better. Yet there is no plan of action for the RCMP to end its role in the genocide of Indigenous women and girls. Lucki has been big on promises and little in the way of substantive action.

It’s time for Lucki and all her deputy commissioners to go. They have served only to protect the status quo, and this has cost Indigenous peoples their lives. The RCMP have proven that they can not reform their institution. They have come to be known as the “Royal Canadian disgrace” by their own inaction. The oft-repeated recommendations for sensitivity training, cultural-awareness training, or diverse hiring practices are not effective in rooting out racialized and sexualized violence against Indigenous peoples. The problem is not Indigenous culture, it’s RCMP culture, which finds time and again that the racial profiling, harassment, brutality and the killing of Indigenous peoples is somehow justified.