Andrew MacDougall: It can't swim with the U.S. or China and it's locked out of the EU. The U.K. sure picked a bad time to champion free trade. 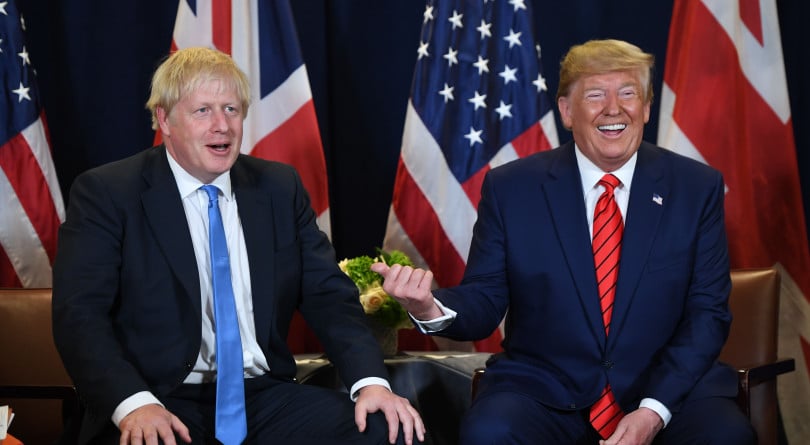 Shorn of the cumbersome bureaucracy of the European Union, Britain is now at liberty to choose. Instead of being dictated to, Britain will now decide how many people to let in, which regulations to set, and which partners to sign trade deals with. Welcome to the glorious possibilities of post-Brexit Britain.

“We are re-emerging after decades of hibernation as a campaigner for global free trade,” Prime Minister Boris Johnson declared as he set out Britain’s post-E.U. stall. “We have the opportunity, we have the newly recaptured powers, we know where we want to go, and that is out into the world,” he added.

Stirring stuff. But has anyone inside Number 10 actually looked into the pool before diving in headfirst? To champion free trade right now is to wee into a seriously stiff breeze. Put differently, there doesn’t seem to be much of a market for a free-trading Britain.

Start with the United States, with whom the Conservatives believe Britain can strike a free trade deal in short order. President Donald Trump has single-handedly brought tariffs back into use, if not into fashion. Trump’s America is a mercantilist mercenary nation, slapping tariffs on allies and enemies alike, not Adam Smith re-incarnated. Any deal offered by a pre-election or re-elected Trump government will be of the ‘take it or leave it’ variety. Nor would a Bernie Sanders presidency be any more accommodating.

And then there’s China. Simultaneously a bulldozer of the WTO regime and critical link in global supply chains, Xi Jinping’s economic goliath is now being laid low by coronavirus and its exportation across the globe. Current (and serious) difficulties aside, China is more interested in making sales and hoovering up intellectual property than it is in opening up its domestic market. Put plainly, Britain will not squeeze a good deal out of China.

Which isn’t to say some people aren’t out there trying to push free trade in difficult circumstances. Canada, for one, still talks a good game on trade under Justin Trudeau, even as allies like the Netherlands struggle to get the Canada-EU trade agreement into force six years after it was agreed. But Canada simply isn’t going to make the weather on trade. It’s too small an economy tied too tightly to the United States.

The British government argues it will find form on trade by rolling over existing European Union deals made when it was a member, including with countries like Canada, Japan and Singapore. And then there are the other Commonwealth countries who share a cultural affinity with Britain.

That doesn’t mean Britain’s in for an easy ride. Having encountered the negotiating prowess of countries like New Zealand and Australia—and their farm lobbies—when Canada was entering the Trans Pacific Partnership, the land of maple syrup is well-positioned to tell Britain it’s in for some tough sledding. Trade talks don’t go easily just because you’re on friendly terms otherwise.

Nor do they tend to go better when you’re the smaller economy or when you’re located a vast distance apart. The existing deals the U.K. would like to roll over were done with the heft of the EU’s 500 million-strong market behind them. Nations like Japan will look to drive a much harder bargain against Britain’s smaller market of 65 million and any deal reached isn’t likely to make up the volumes Britain would lose should things go badly with Europe.

The best move on trade a post-Brexit Britain can make is to secure a strong partnership with the European Union, i.e. the giant market right on its doorstep. Britain is now the junior partner, market-wise, but its businesses have been operating in European markets for over 40 years and would like to keep their current relationships and level of access.

Sadly, the comprehensive no-tariff no-quota trade target agreed by the U.K. and EU in last autumn’s political declaration already looks unachievable, if the opening salvos from both sides are any indication. The struggle over the so-called ‘level playing field’ provisions looks set to screen out deep and friction-free access in favour of a much narrower agreement.

Where does this leave ‘global’ Britain?

A moderately sized fish in a stormy global sea, one that can’t swim with the sharks like the United States or China, and is locked out from the EU, its former school. And while the European Union can continue to push forward on trade using the heft of its aggregate market and aggressive regulatory regime—i.e. the so-called ‘Brussels effect’—Britain will have to go it alone at a time when the prospects for free and fair trade have rarely looked worse. Britain has jumped into the free trade pool just as others are draining the water.