Can Canadians eat their way through this French fry surplus?

Corey Mintz: There are plenty of deep fryer-equipped vehicles sitting dormant right now. Load them up with potatoes, sanitizer and start driving through town, distributing spuds. Why not swirl that up with some national pride? 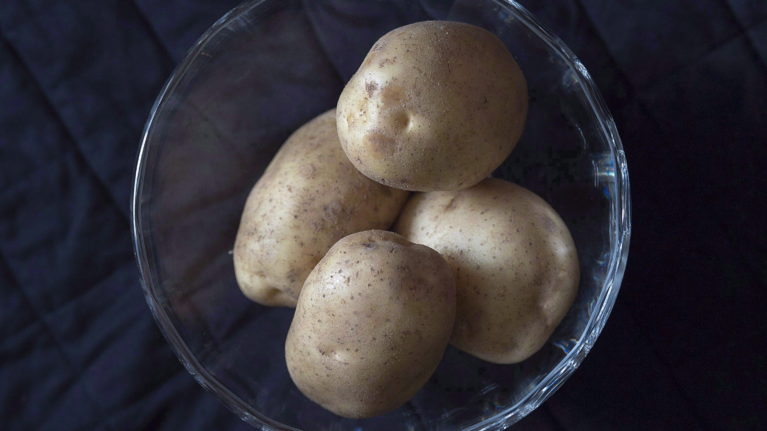 Potatoes are seen in Halifax on Nov. 28, 2016. There are 200 million French fry potatoes in Canada already harvested. (Andrew Vaughan/CP)

Would you even recognize the version of yourself from February, 2020? Life changes fast. In a matter of weeks, the coronavirus has pushed most of us into an alternate universe of our lives that, only a couple months ago, would have been unthinkable.

Case in point, Canadians might be asked to eat 200 million pounds of French fry potatoes that have already been harvested, but won’t be moving through the usual restaurant supply channels. Belgium (the world’s largest exporter of frozen fries) has been facing similar situation. While some of their 750,000-tonne surplus has gone to food banks or fed to cattle, the potato trade association Belgapom has urged Belgians to cook and eat fries at home twice a week.

If Canadians are asked to heroically eat our way out of this fry surplus, can we do it?

This is a long way from November 2018, when Eric Rimm, a doctor and professor at Harvard’s department of epidemiology and nutrition, warned us of the dangers of eating a seventh fry.

“I think it would be nice if your meal came with a side salad and six French fries,” Rimm told the New York Times, in a bygone era when we thought nothing of eating a meal in a restaurant next to a stranger, and we greeted each other with handshakes instead of shouting from a safe distance. Now we’re supposed to cook and eat French fries at home twice a week?

MORE: Lives on the line

If we could beat the Nazis (with a little help from the United States, Australia, New Zealand, the United Kingdom, the Soviet Union, China, Luxembourg, and the rest), surely we can mobilize a national effort to eat fries. There are plenty of Canadians who won’t have to be asked twice. Yes, we have the appetite, and likely the stockpiles of ketchup, vinegar and mayonnaise necessary to accompany it. But the challenge leaves three problems—cooking, safety and nutrition.

Last week a friend of mine made French fries as part of his family’s dinner. His recipe was this:

“Cut some Russets up to look like fries. Soak them in water, overnight is best. Heat three litres of your preferred vegetable oil (sunflower or canola) in a deep, but not too wide, pot with a candy thermometer to 250F. While that’s warming, drain the potatoes, pat dry, carefully add them, in batches (50 pieces or so) to the hot oil with a slotted spoon or spider, and blanch them for seven minutes. Drain onto cooling rack set up on top of a baking sheet. Repeat ’til they’re all blanched. Let them cool for an hour or so to room temperature. Reheat the oil to 350F and fry your blanched fries, in batches again, ’til they look as golden as you like them. Drain onto paper towel-lined bowl, toss them a bit to drain some oil off, and then add liberal amounts of salt (fries need more salt than you would ever imagine they do). You can keep your batches warm in the oven at 175F as you’re frying the next batches.”

MORE: How food supply disruptions from COVID-19 are leading to higher prices for consumers

Now, almost nobody is going to do this. Non-restaurant people don’t have a candy thermometer or a spider. From my experience, cooking both at home and in restaurants, you can skip the soaking part, but you can’t skip the blanching. Fries don’t need to be quadruple fried in duck fat to be delicious and crunchy, but they do need to be fried twice. If you try to cook them all the way through once on a high heat they’ll burn before they’re cooked in the middle. And if you do it on low heat they won’t get crispy enough.

Assuming people are up for the work, there’s the issue of safety. All you need is a large, heavy pot, and to avoid filling it any higher than one-third with oil. However, having written newspaper recipes for fried chicken and doughnuts, I’ve heard from enough readers to understand that the very idea of deep-frying provokes anxiety in people, which is understandable. If you don’t do it right, it is absolutely a fire hazard.

As for nutrition, hey, most of us are already eating like racoons, stuffing our faces with garbage food that our bodies are barely able to digest. So a temporary increase in deep-fried potatoes isn’t going to kill us. If anything, it’s just replacing the restaurant French fries most of us would usually be eating.

Some of these concerns could be circumvented by nationalizing food trucks. There are plenty of deep fryer-equipped vehicles sitting dormant right now. It’s not a hard to get these trucks (each equipped with two employees) on the road. Load them up with potatoes, sanitizer and start driving through town, distributing spuds. I think a lot of people would be thrilled to hear the chime of the potato truck ring-a-ding-dinging down their street. Why not swirl that up with some national pride?

If that seems silly, then consider this situation a preview to how our food consumption needs to change. Because of quarantine cooking as well as faults in our supply chains (we have plenty of food, just not the usual overabundance we usually let go to waste), we are already being forced into more sustainable behaviour.

Our culture of excess—wasting half of the food we produce, the demand for infinite choice and instant convenience—must end. The foundations of our society—the working poor forced to put their safety at risk to provide the rest of us with comforts—is being exposed. There is no shortage of protein in the United States. But rather than considering eating beans, President Trump ordered meat processing plants, already dangerous environments that have become vectors for infection, to continue operating. Cargill reopened their Alberta plant, which is the site of one of Canada’s most significant outbreaks.

In the last six weeks, every one of us has radically changed how we gather our food (except for the one-to-three per cent of Canadians who were already ordering groceries online). For some, that means queueing in a supermarket to stand six-feet apart. For others, it involves home delivery or buying direct from a local farm. More than the method of collection, we are changing how we eat at home. I certainly never used the centre rib from kale before (you can make it crispy in the oven). Because we don’t have the same freedom of selection, we’re learning to be more resourceful, adapting recipes to consume what we have and finding uses for meats forgotten in the freezer and strange grains languishing in the pantry. I finally used that parsnip puree I made in 2015.

It’s too early to tell if we will learn from this experience, or double down on our wasteful, exploitative ways.

But what makes more sense: eating more French fries for a short while, or continuing to truck 80 million kilos of avocados from Mexico to Canada every year? Please tell me it’s the first because I would love to justify cooking junk food. I’ll even make my own mayo with Canadian canola oil and an egg yolk from an Ontario farm. If there are other foods that demand a burst of home consumption right now (fingers crossed that it’s time to harvest those peanut butter M&M trees) please let me know how I can help.