Can compassion successfully challenge the status quo on health?

Opinion: Compassion may have saved Obamacare. But in the U.S. and in Canada, there’s proof that more is needed for real healthcare change 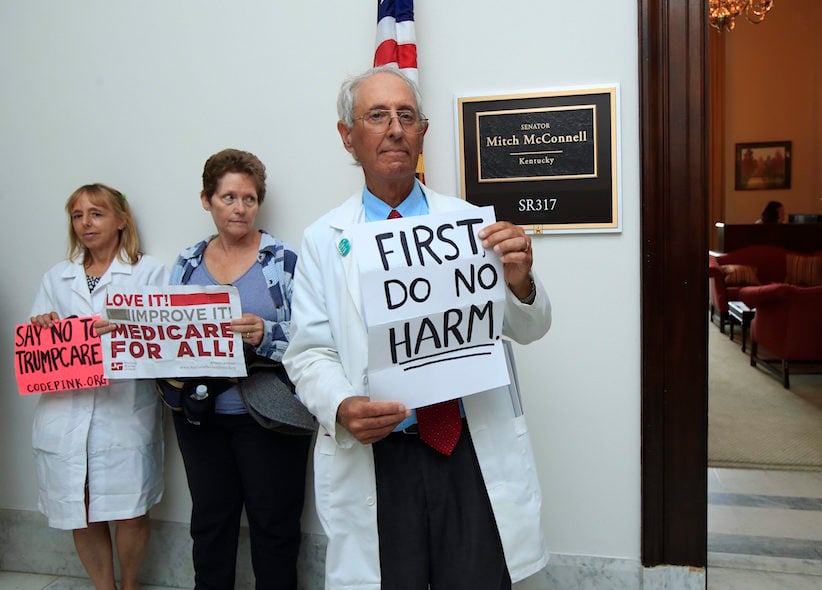 Danielle Martin is a family physician and the vice-president of medical affairs and health system solutions at Women’s College Hospital in Toronto. Sandro Galea is the dean and the Robert A. Knox Professor at the Boston University School of Public Health.

Over the past few weeks, Canadians have watched aghast at the froth generated by the ultimately failed efforts to reform the U.S. health care system. Building on eight years of opposition to the Affordable Care Act (ACA), also known as Obamacare, and emboldened by then-candidate Donald Trump’s promise to deliver health care for all that was cheaper and better, Republicans—first in the House, and then in the Senate—launched several bills that floundered and then, each in turn and in different ways, flamed out.

The failure of these bills was driven, in no small part, by repeated warnings from the non-partisan Congressional Budget Office (CBO) that, if passed, they would result in tens of millions more people becoming uninsured in the coming years. It is now not at all clear that President Trump will be able to follow through on his election promise; Obamacare will, it seems, remain law for the foreseeable future.

The unfolding political theatre has been riveting, and in many ways appalling, to international observers, including those of us north of the border. Republicans sought reforms that would, in all versions, remove health insurance from millions of people, despite repeated testimonials from health professionals that this would substantially harm the health of Americans. What makes the spectacle worse is the reality that efforts to repeal Obamacare were in no small part driven by efforts to save money, perhaps to pave the way for tax cuts for the wealthiest Americans and corporations.

At base, the primary political force that contributed to the failure of the Obamacare repeal efforts is the difficulty of removing a benefit that has become part of the social fabric. This is in part because of the heavy politics of challenging the status quo, or what is known as “path dependency.” But at a human level, the victorious force at play was the embrace of compassion for people who would lose their health insurance if the bill were successfully repealed. How compassion is deployed in efforts to make health care better offers us lessons not just for Americans involved in the health-care debate, but for Canadians, too.

Indeed, removing benefits is not easy for governments to do, a fact that portends well for countries like Canada that have long established universal healthcare programs, flawed as they invariably are. The existence of Canadian Medicare for decades makes it a fact of life for Canadians: polls repeatedly show that it is SEEN AS part of the national identity. This suggests that, despite occasional efforts to do so through the courts, it would be tough to seriously threaten or repeal Canadian Medicare. And the ACA, although troubled from the start, has now withstood an all-out assault by Republicans who faced enormous resistance to removing coverage that had become a fact on the ground.

This natural political inertia, though, would not have been enough to protect Obamacare had a critical number of senators not balked at the moral cost of denying millions their health insurance. Ultimately, a bare majority of American legislators could not stomach the idea of removing access to basic services from so many. Indeed, the national conversation was coloured by commentary about the meanness of the proposed Republican plans. Repeatedly, a face was put on the public masses who would be worse off if the ACA were repealed. And who could take away health insurance from people who not only had votes, but also had names and faces? In short, compassion prevailed over cruelty, a heartening endorsement of a core human sentiment that’s too often downplayed in public policy debates.

Compassion plays out in Canadian conversations about health care, too. When the Federal Court of Canada reversed cuts to health insurance for refugees in 2014, the court ruled that the policy of denying health care to refugee claimants amounted to cruel and unusual treatment, putting at risk “the very lives of these innocent and vulnerable children in a manner that shocks the conscience and outrages our standards of decency.”

But while rescinding benefits can be political suicide on both sides of the border, that doesn’t mean that expanding them is easy—and shows that compassion only goes so far. It needs to be backed by political will and courage that can deliver on the opportunity compassion presents. In the U.S., Barack Obama was elected president on a promise to improve health care coverage. But he still had to fight an epic political battle to establish the ACA, making substantial compromises along the way. And universal coverage remains a distant dream in America. Challenging the status quo in the face of entrenched interests, even when the result is so clearly in the public interest, burns through political capital, and the outcome often falls short of the goal.

On both sides of the border, compassion has been more easily harnessed in service of resisting harmful change to the status quo. Where current coverage is placed under threat, compassion has been shown to be a relevant and powerful force. But compassion by itself is insufficient to yield meaningful change when that change is a challenge to the status quo. By way of example, decades of efforts in Canada to expand Medicare to include prescription drugs have yielded little progress, with the result being Canada’s status as the only high-income country with universal health care that does not include universal pharmacare. Despite heartrending stories of the consequences of not having pharmacare and initial forays in the right direction at the provincial level, Canada seems not much closer now to real pharmacare than it was four decades ago, showing us that, for all our smugness about America’s recent healthcare paroxysms, expansion of coverage is actually not any easier in Canada than it is south of the 49th parallel.

Compassion has proven to be a force that may allow people who truly support better health to claim victory for a brief moment. But the more important challenge revealed by the health care reform experience of both Canada and the U.S. is whether compassion can be effectively funnelled toward not just protecting the status quo, but also challenging the established order, in order to achieve real and meaningful improvements in coverage and quality of care for all.