Can democracy survive the coronavirus?

Dave Moscrop: Our practices and institutions are stable and functional—until they’re not 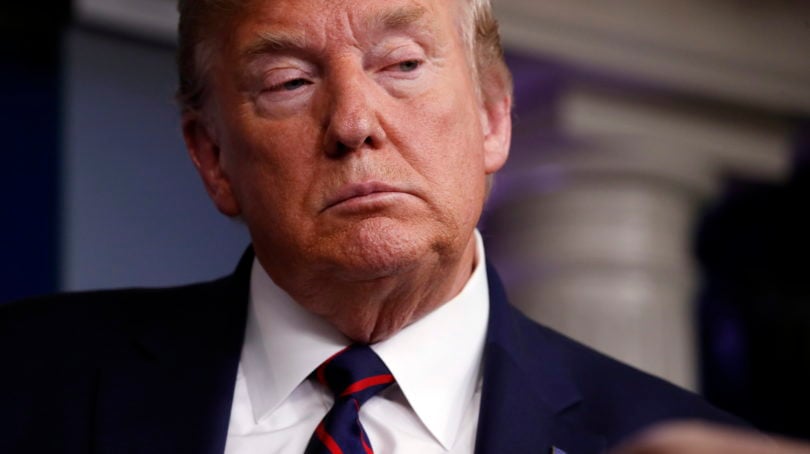 In this Mar. 27, 2020 photo, President Donald Trump listens to a question as he speaks about the coronavirus in the James Brady Press Briefing Room in Washington. (Alex Brandon/AP/CP)

Liberal democracy was in decline around the world before the COVID-19 pandemic arrived. The growth of authoritarian populism, the rise of illiberal competition, growing inequality, elite abandonment of forbearance, and the threat of climate change stacked each upon the next to threaten that form of rule by the people. Critiques of the thinness of an overly individual-centred and negative-rights-based model of self-government further revealed the shortcomings of what champions of liberalism had claimed to be: the functionally, intellectually, and morally superior system of government.

Some believe that political rights and economic rights are separable, that democratic life and economic life are related, perhaps, but not one and the same. Now, the crisis of democracy has surfaced, putting pressure on liberal democratic and economic institutions, and giving authoritarians an opportunity to seize or extend extraordinary powers to undermine or eliminate civil liberties and present certain free marketeers with an opportunity to consolidate their hold on the marketplace.

In the United States, the uneven, incompetent federal response to COVID-19 has led to a skyrocketing of cases. As the virus spreads, those who have the least are forced to bear the burden of the most, like the workers who hustle to make ends meet and keep supplies stocked for all. Even as some look ahead, President Trump resists reforms, saying the quiet part loud. On Fox & Friends Donald Trump discussed he U.S. emergency measures bill, which includes direct payments to individuals and loans to business, among other things.  “The things they had in there were crazy, ” he said regarding the Democrat’s demands. “They had levels of voting, that if you ever agreed to it you’d never have a Republican elected in this country again.”

In Hungary, an emergency law allows Prime Minister Viktor Orbán to “rule by decree without time limits,” as The Guardian puts it. That is a measure that is “incompatible with being in the EU,” they add, citing members of the European parliament. The law also includes draconian punitive measures and limits to civil liberties, including jail sentences for spreading misinformation or otherwise hampering control measures, and an open-ended state of emergency. As a far-right zealot, Orbán was already a threat to democracy. Now he’s seizing the moment.

Globally, the International Institute for Democracy and Electoral Assistance writes that “with more than 70 national elections scheduled for the rest of the year worldwide, the coronavirus pandemic is putting into question whether some of these elections will happen on time or at all.” The risk of electoral backsliding is high for developing democracies, but it could extend beyond that category, too. Electoral integrity is at risk around the world.

Our practices and institutions are stable and functional—until they’re not. Extraordinary times threaten that which we take for granted. The risk to democracy from COVID-19 is most obvious in countries where self-government was already under threat or in retreat, but as we continue to consider the extent and effects of the pandemic, no democratic state ought to take anything for granted. Instead, each state ought to look at how they can double down on democracy.

MORE: Canadians are telling their government—do whatever it takes to make it right

In Canada, we should assess the ways in which our institutions—political, social, cultural, and economic—are inclusive and empowering and the ways in which they are not. We should ask ourselves: Who is listened to during policy debates—even emergency debates—and who isn’t? Who is at the table in the first place? Who is covered by crisis measures and who isn’t? Who has access to resources during normal times? Resources that help them not only manage day-to-day life, but prepare for the lean times. And who has access to resources now? What about when this is all over?

A healthy democracy requires trust, accountability, responsiveness, and inclusion. These democratic goods are contingent on both being available and being perceived to be available. That means that not only do we need to make our institutions work for people, those people must know they work—and they must be willing and able to use them. That ability and willingness depends upon the political courage, will, and work to bring people into self-government in a robust way that actively seeks and responds to the needs of citizens, especially those who aren’t typically consulted.

A moment of crisis, such as this one, might suggest a time to retreat from such commitments. That’s a mistake. In the midst of fear, uncertainty and panic, it is critical that we defend democratic institutions and values, and indeed, work to extend them so that they also serve those who are traditionally excluded from them. This imperative was important before. Perhaps it’s more important than ever.

We must not only protect democratic rights and civil liberties in this moment of crisis, but also begin to work on deepening them. That effort requires us to adopt economic democracy—aggressively redistributive policies—that shift resources and power back to the community (for instance, through worker-owned businesses and universal access to adequate social benefits) so that democratic rights aren’t merely hollow and theoretical possibilities, but real and tangible opportunities. We must also create deliberative, participatory institutions so that citizens are brought fully into the process of governing and given more power to set the political agenda and recommend courses of action. That work can also be a model to the world, though it ought not to become the spear of imperialism.

The Italian political theorist Antonio Gramsci wrote—of a different time—“The crisis consists precisely in the fact that the old is dying and the new cannot be born; in this interregnum a great variety of morbid symptoms appear.” Today, the new can be born by way of a commitment to redistributing resources and power back to the many. In fact, for democracy to survive, it must.