Can Erin O'Toole get by without a little help from his friends?

Andrew MacDougall: Trotting out certain premiers would've been risky for the Conservative leader, but so is pretending they don't exist 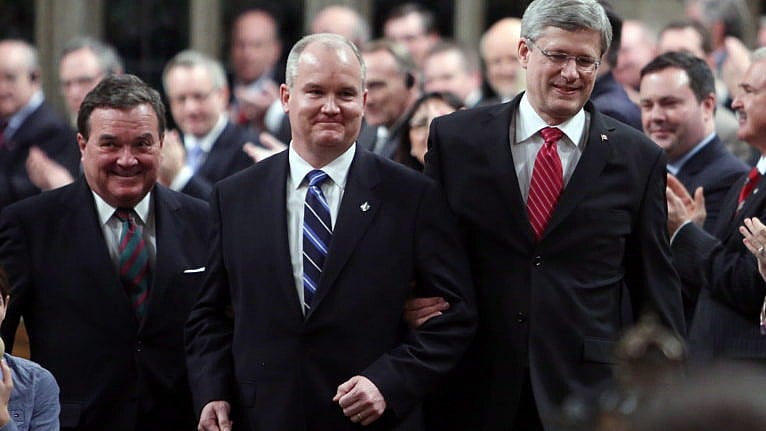 Harper leading Erin O'Toole into the House of Commons in 2012. Thoughout the 2021 campaign, O'Toole seemed happy to leave his former boss on the sidelines. (Fred Chartrand/CP)

In politics, as in life, it’s usually sound advice to dance with the one that brought you. It’s odd, then, that Erin O’Toole has chosen to skate through this election campaign largely on his own, or at least without the ones that brought him.

Take Stephen Harper. The former prime minister is still the favourite bogeyman for Justin Trudeau and his Liberals, most likely because everything has gone downhill for the Grits since they defeated Harper in 2015. But Harper is also the leader who gave O’Toole his entry into Canadian politics, tapping him to run in Bev Oda’s vacant Durham seat in 2012; as well as the man who gave him his Cabinet position, as minister of veterans affairs in the last Harper cabinet. And yet, there’s been no Harper. It’s bizarre.

Is Harper the new Tony Blair—i.e. the only man who can lead his party to victory but also a pariah to the latest version of his party? One suspects not, given his latent popularity with the Conservative membership, which makes it likely Harper was asked to lay low and, not wanting to inject himself into a predecessor’s plans (or perhaps disappointed about the reversal on carbon tax?), agreed. (Full disclosure: I have not spoken to my former boss about any of this.)

Ignoring the only Conservative Party of Canada leader to win elections seems an odd choice but, hey, every new leader should get their sandwich the way they’d like to eat it. The only trouble for O’Toole is the sandwich he ordered during the leadership campaign against Peter MacKay isn’t the same sandwich he’s trying to snack on now. That’s bound to put some noses out of joint within the cohort that made him boss.

And then there are players like the Conservative premiers across the land, all of whom have either been placed on mute or disappeared down the disappearing hole. Sure, trotting out Jason Kenney, Scott Moe or Doug Ford during these pandemic hell times would be risky, but so is pretending they don’t exist. Yes, Kenney is radioactive at the minute, but his endorsement also went a long way to true-blueing O’Toole’s leadership bid. Not even offering up a defence of Kenney’s early handling of the pandemic—which is what, after all, O’Toole endorsed in that now infamous video—is to burn a bridge forever.

What about former and current colleagues? John Baird hosted a tele-town hall, but O’Toole could have had more of his former cabinet allies—the ones his team deemed clean after the 2015 election, anyway—do more to help him along. Instead, it’s crickets at the national level. At most campaign stops O’Toole hasn’t even gone out of his way to feature his candidates. It’s O’Toole time, all of the time.

Strike that. One prominent ex-politician did stump prominently for O’Toole: Martin Brian Mulroney. From where I sit, this is a fine idea, but one that needs to be properly framed. Mulroney was a successful leader by any measure, but he also splintered the conservative coalition into its reformist, separatist and progressive parts. Having Mulroney appear alongside Harper—if that were even possible—would have sent a much more powerful message, one with a better chance of being swallowed by the coalition, than “this is not your dad’s Conservative Party anymore.”

All of this to say, O’Toole is a long way out on a thin branch, and he’s all alone. He will either be the sole author of his victory, or an orphan in defeat. O’Toole must either win the most seats, or demonstrate enough improvement in the areas Conservatives need to improve to hold government (i.e. the bits of Canada east of Manitoba). Lest we forget, the most important task facing the Conservatives is to expand their support, and O’Toole has honest-to-God tried to do this. It’s just his bad luck these efforts have come at the same time Beijing covered up the spread of a novel coronavirus, birthing us the pandemic, and the social media networks gave the fringe a way to organize to his right. It’s not been an easy chasm to manage.

That’s why axing O’Toole would, on balance, be a mistake. For one, Canadians could be back into an election in 18 months. Nor has it been an easy life as opposition leader during a pandemic. Think of all of the rubber chicken dinners left uneaten, the personal relationships not cemented, and the chances lost to hear from Canadians where they live. The hardest part of being an opposition leader is introducing yourself to Canadians and Erin O’Toole hasn’t had a chance—until this election—to introduce himself.

But any second chance should be predicated on learning one of life’s best lessons: you dance with the ones that brought you, even if you need other, extra dance partners.