Can the U.S. Secret Service really be that gross?

Tabatha Southey: Eric Trump claims the Secret Service stays at Trump properties for free, and any associated costs are mostly related to housekeeping. But the bills sure don't appear to be cheap. 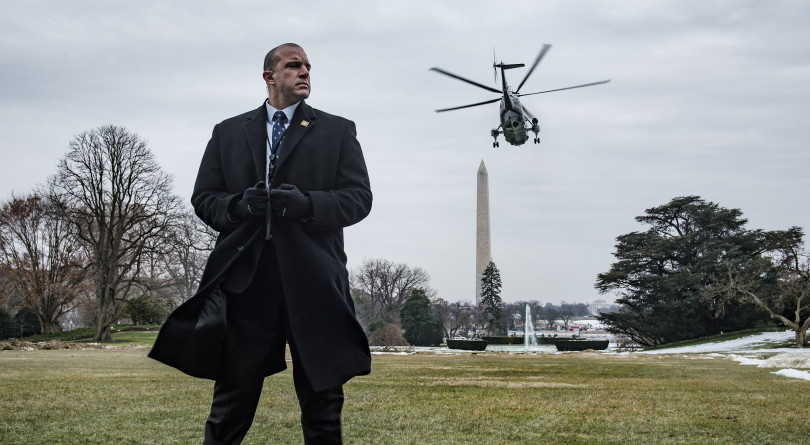 A Secret Service agent stands watch as President Trump departs on Marine One from the South Lawn of the White House on Jan. 19, 2019 in Washington, DC. (Pete Marovich/Getty Images)

The Washington Post reported this week that President Donald Trump’s company has been charging the Secret Service rates as high as USD$650 per night when agents stay in one of Trump’s properties while protecting the president.

Documents not easily obtained by the Post show that in 2017, the Secret Service was charged that rate dozens of times, and in 2018, the service was billed USD$396.15 per night dozens more times for its stays in Trump-owned accommodations.

In a Yahoo News interview, Donald Trump’s son, Eric Trump, insisted that “the government actually … saves a fortune” when Trump bunks his rump at a Trump Not-a-Dump (you can tell by all the marble) because, “If my father travels they [the Secret Service] stay at our properties for free, meaning like cost for housekeeping effectively.” These hefty bills would, on the face of it, appear to contradict this claim, or do they?

Basically, as I see it, we’re left with two possible options here: either the Trump family is a bunch of shameless grifters, diverting tens of thousands of American taxpayer dollars to their private businesses, or Secret Service agents are just gross.

Fortunately, a partial, and slightly damp, copy of a “diary” written on stapled-together Trump-property stationery, has recently come into my possession. I believe it sheds some light on the subject. This new information suggests that $650 U.S. per night is an entirely reasonable figure for the service provided. In fact, my source suggests that it may not even approach the cost of cleaning up the mess made by America’s Secret Service agents, who, I suspect, will likely not be getting a lot of cottage invites this summer.

The following are entries from a member of the Mar-a-Lago resort cleaning staff whom I will call “Ms. M.” to protect her identity:

Whoooo! I’ve been assigned a room being used by the Secret Service! This is exciting for way too many reasons to list, but let’s start with: a) It’s the Secret Service, complete with dark sunglasses, how cool is that?! and b) These guys are 100-per-cent going to be an easy room to clean—these are not the suits of untidy people.

Ughhh. They ordered room service and I have only two words. 1. Mustard. 2. Everywhere. I didn’t realize they were actually called the Men In Black Because Black Doesn’t Show Stains.

Be a sweetie, wipe the seatie. And, if needs be, the floor.

I don’t even want to know why all the sheets smell faintly like cilantro.

The trouble started before I even reached the accursed room. The moment I pushed my trolley out of the elevator and onto the floor, I knew something wasn’t right.

I heard the sound of running water, the creak of abused flooring; cries of “What the hell? There’s water coming through the ceiling!” came from the floor below. I steeled my nerves and approached the door, knocked and called out,  “Housekeeping!” trying to keep my terror out of my voice. If you learn only one thing from my tale, let it be this: never show the Secret Service fear.

“Come in!” called out a voice from within. The door swung open and I was quickly ushered into the room. Instantly, water soaked through my shoes and socks, covering my ankles. I rushed into the bathroom, looking for a burst pipe, but no, this this was no accident.

They had blocked the drains in the shower and sink and had the water running full blast. I shut off the taps and turned back to the bedroom. There it was, a shower curtain that had been stuffed into the gap at the bottom of the door, all the better to flood the room.

“Why, why would you do this?” I asked them. “Don’t worry, miss,” they replied. “Everything is under control. We just want to make the water buffalo feel at home. After you make the bed, could you bring us a few more towels, and maybe a tray of water hyacinths?”

They are mocking me.

God, have mercy. They were not mocking me. How do you fit 27 water buffalo in a hotel room? How do you even fit one in the elevator?

Today I knocked, no answer. Just the sound of stomping, grunting from within and what I fear was horns scraping against the $50 bill and fake Trump Time magazine cover wallpaper. I pushed a card telling them to ring housekeeping if they wanted turn-down service. They pushed a note back at me. It said,“We herd you.”

I had shown fear and, inevitably, the dad jokes followed.

And on that note, the diary ends.

Eric Trump complained to Yahoo that his father does not “get credit” for letting the Secret Service crash at his place for practically nothing, and I guess doubters like me owe that innocent, 36-year-old boy an apology. Unless someone in the Secret Service would like to offer a different perspective.