'Can you make them love us the way they love bees?' When wasps want a rebrand

Opinion: A vast swarm of angry wasps make their way to Tabatha Southey for advice on how the insects can improve their poor public image 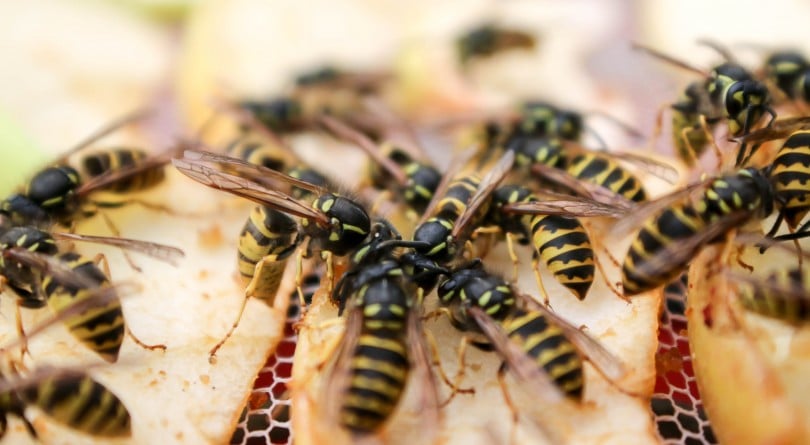 I instantly recognized the survey published in Ecological Entomology for what it was. The story—picked up by various news outlets around the world under headlines like “Why do we hate wasps and love bees?” and “It’s time to lose the ‘negative attitude’ about wasps, says researcher”—was obviously the first volley in a campaign to try and take the sting out of the wasp brand.

Seeing as I have been, for some time, the first point of contact for animals trying to get a story out into the human world, I was not at all surprised when the wasps turned up to see me. Also, I’d just brought my lunch out onto my front porch, so obviously they were there anyway.

“So what made you, a vast swarm of angry wasps, think I could help you with your public relations campaign?” I asked the unholy crowd of buzzing creatures.

“To be honest, we tried those ‘Navigator’ guys we kept hearing about, but they were all, ‘Ahhhh, the office is filled with wasps!’ and ‘One of them’s crawled down my shirt!’ and ‘OH GOD IT’S IN MY HAIR! AAAAAH!’ ” one of the wasps said, from his new home on my grapes. “They seemed a bit high-strung.”

I did my best to convert the “get away from my beet salad, you vile little beast” gesture I was in the middle of into something that might have been taken for “the arrival of these interesting guests to my reviving mid-day meal has inspired me to play air guitar and I am really rocking out here.” Better to look crazy than rude, I always say.

“I guess you saw the survey? I won’t call it news,” said a wasp in a dejected tone, crawling all over my grilled-cheese sandwich in that way where you can’t tell what it’s doing and it makes you suspect the absolute worst.

“I did,” I said. “I can see why you guys want to get some positive press, or basically any press at all. When I read the bit about how, of the 908 scientific papers published since 1980 that the researchers reviewed, 22 were about wasps and 886 were about bees, my immediate response was to Google the bee stuff. Because candles and queens!”

“It might not be news, but it’s still hurtful!” cried a wasp camped out on my laptop. “When those researchers at University College London asked survey participants to think of the words they most associated with bees, the words ‘honey,’ ‘flowers’ and ‘pollination’ were offered up. The most common wasp-associated words were ’sting,’ ‘annoying’ and ‘dangerous.’ ”

“Yay! Sting her again!” one of the wasps cried out in excitement. “That’s a thing we can do! Unlike bees, we can sting you over and over!”

“No, no, I wasn’t stung,” I said. “That was an an empathetic ‘Ouch,’ as in ‘it must be unpleasant having just about everyone in the world hate and fear you.’ ”

“Well, can you help us?” asked the terrible buzzing voice of a thousand wasps speaking in unison like an plaintive biblical plague. “Can you make them love us the way they love bees?”

“The thing is, bees aren’t just kinda sweet-looking,” I explained. “By the way, have you guys thought about big puffy coats, or just trying to look more bumbly?”

Here, I was met with the cold stare that only the suggestion of big puffy coats and “looking more bumbly” can bring, but from countless compound eyes.

“Look,” I said, “bees make honey, that’s pretty hard to beat. Any chance you could get in on that sweet viscous fluid game? That might help your negatives.”

“No, we don’t really make honey. But we do kill bees and steal their honey given the opportunity. We could maybe cut you humans in on that. Hey, just putting this out there: next time I bite a honey-bee in half, I can give you a call and you can have the front half, still crawling about on the ground.”

“Ok, let’s just scratch ‘producing food’ off the list,” I said, brightly. “Maybe we issue some sort of statement: ‘We regret any pain we may have…’ ”

“But that wouldn’t be true at all!” Grapes Wasp yelled, cutting me off. “I know that I, for one, take great pride in every cry of ‘Argh! I just got bitten by a wasp, this day is just the worst.’ ”

“We’re just as busy as bees, you know,” came the voice of Laptop Wasp, who was now up my sleeve. “We work hard bringing home food and filling our dry papery nests—sometimes built inside the very walls of your home—with teeming masses of squirming maggot-like wasp larvae.”

“Maybe we could go with a soft sell, see if we can’t get you guys in a movie or something—nothing that makes people feel like they’re being lectured to, but something that’ll still get them thinking,” I suggested.

“We tried that,” buzzed a dejected wasp perched on a slice of apple. “But I’ve had so many treatments rejected with ‘NO WASPS’ written on them, underlined, sometimes three times. So many elevator pitches have been met with ‘What the hell! There’s a wasp in the elevator!’ ”

“It’s ridiculous. Pixar was all over those ant guys: ‘Oooh, they’re so industrious, they cooperate to achieve tasks they could never accomplish individually, blah blah blah.’ But apparently nobody wants to take their kids to the movie about me shoving my unusually long ovipositor right through the side of a tree to lay my eggs inside those silver-screen hoggers’ helpless larvae.”

“Ants! Now there’s an idea,” I said. ”Any chance you guys could all get together and build a bridge or a raft out of your own bodies?”

“No, but give me a little while and I know some wasps who’ll happily build a great big nest under the slide in a children’s playground, then attack any hapless four-year-old who gets too close,” said a wasp in my ear, like literally in my ear.

“I know one girl who lays her eggs inside caterpillars and then, when they hatch, her kids eat their way out of their still-living host. It’s adorable. How was DreamWorks not all over that?” said a wasp who looked like she was seriously considering falling into my cup of tea to drown herself, thus forcing me to go make a new pot, because eww, wasp, you can’t just pick that out.

“Maybe you could book us an interview where we tell those stories, let people see who we really are, sting the camera crew if we feel threatened—”

“I hear you,” I said. “But I fear that might be the paraphyletic group-wide version of Johnny Depp’s Rolling Stone interview. But look, I think we’ve been going about this the wrong way. Maybe you don’t need to be loved—just understood. Maybe not everything has to be cute.”

The wasps looked at me critically here, and rolled all of their eyes.

“Hear me out. Maybe the part you play—all the thousands of different species of you—is to be useful, not beautiful, because there’s really nothing very attractive in you eating lots and lots of other bugs. And pollination need not always be filmic, but we would be lost in the empty produce aisles without you.”

The wasps seemed satisfied, or at least they left, probably not never-to-return—they’re wasps, after all, and I’m thinking of having a barbecue next weekend.