Canada is 'a bad compromise, an evil gift that keeps giving, mostly trouble'

Letters to the editor, Jan. 21, 2020: Readers weigh in on frayed national unity, fallout from the election and permanent deficits 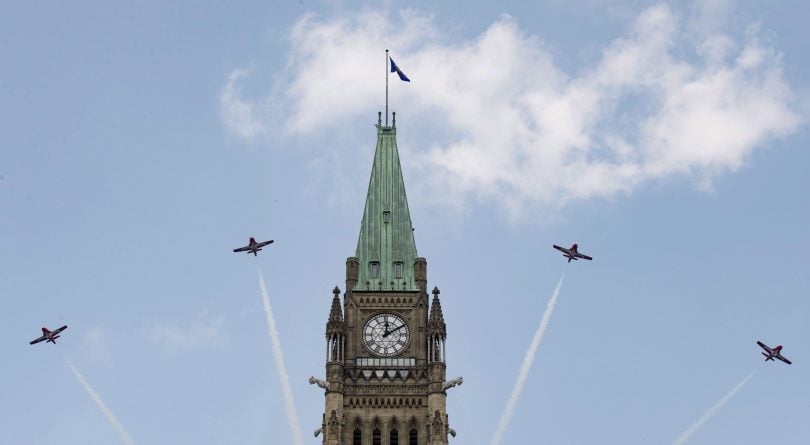 The Snowbirds fly past the Peace Tower during Canada Day celebrations on Parliament Hill in Ottawa on July 1, 2018. (Justin Tang/CP)

In October, Alanna Mitchell wrote about the vaping crisis that has hooked—and killed—young people across Canada.

My son has been vaping since he was 16, against our wishes. He is now almost 18, and in all the time he has vaped, he has been asked for ID only once while purchasing vaping supplies. I think every vaping outlet should be mandated by the government to install an electronic ID checker so that customers have to scan their ID to make a purchase. This would bring about some control over businesses that care only about sales, and would also be a deterrent for teens trying to buy these dangerous substances.
—Marni McGettigan, Saskatoon

Maclean’s writers penned dozens of stories in the months leading up to last year’s federal election. In its aftermath, readers had a lot to say about what went down.

While reading the comprehensive election coverage in your December 2019 edition, I kept looking for something particular but never found it, namely a concise table showing the number of seats won by each party and its share of the total popular vote. This is because something ironic would have popped right out. Trudeau’s Liberals have won a minority government only because of his broken promise that 2015 would have been the last first-past-the-post election. Because the Conservatives actually won over slightly more voters (34.4 per cent of them) than the Liberals (33.1 per cent) in 2019, a proportional representation election would have given the victory to them. As it is, we have an upside-down result. The same thing happened in the 2016 American election. If proportional representation ruled, we would now have President Hillary Clinton and Prime Minister Andrew Scheer. So much for the archaic first-past-the-post electoral system.
—Charles Van Wagner, Courtenay, B.C.

If seats in the House of Commons were distributed according to proportional representation of the popular vote, the Greens would have 22 seats—and official party status—rather than the three seats they ended up with on Oct. 21. Fair Vote Canada provides this analysis and shows how different the elected government would look if votes translated to seats. And I’d wager Elizabeth May and the Greens would get even more votes if voters didn’t have to do this crazy “strategic” voting, when we are forced to cast a ballot for a party we don’t want in order to try to prevent an even worse one from gaining power in this undemocratic first-past-the-post system our leaders keep clinging to. Come on, Trudeau! You promised electoral reform the last time. Some form of proportional representation is absolutely necessary if we are going to call ourselves a democracy where voting counts.
—Tasha Stephenson, Yellowknife

I am astounded at the level of interest from the Rest of Canada (ROC) in Quebec’s secularism law, which covers rules for government workplace attire. Astounded because so many people in the ROC think that religious dress codes, developed before the New World was even discovered, should take precedence over the secularism law that was passed in 2019 with the support of the majority of Quebecers. The law does not limit the religion anyone can practise, or what people wear in their homes, on the street, in their places of worship or virtually anywhere else, except in the workplace for specific government employees. Quebec was under the thumb of the Roman Catholic church for more than 300 years before abandoning the church in the late 1950s and 1960s. This happened in what was called the Quiet Revolution, which coincidentally coincided with the availability of the birth control pill and women’s liberation. While Quebecers are willing to accept all religions, they are not willing to accept demonstrations of religious affiliations (religious identifiers) in the government workplace for people in positions of authority. The almost hysteric reaction in the ROC to Bill 21 is reminiscent of the hysteria in the ROC that accompanied the introduction of Bill 101, Quebec’s language law in the late 1970s. If I remember correctly, no one lost their life over Camille Laurin’s language law. By the way, it is interesting to note that while almost all aspects of human life on earth change/evolve/improve, the one aspect that does not change/evolve/improve is religion.
—Larry Harding, Montreal

In December, Senior Writer Paul Wells wrote about a “disturbance in the federation“—Canadian confederation, that is. When federal and provincial governments clash, there’s usually at least a desire to make progress, he wrote. Not this time.

We were, in a sense, locked into this crazy room by a group of scoundrels, many of them drunk, who met in Quebec City in 1867. Lacking any good ideas, they signed on to a bad compromise, an evil gift that keeps giving, mostly trouble. Sitting here at home, in the national capital, I’m thinking about what kind of government I need. A central government, for sure, to defend us and spread the wealth. Local government, to look after everyone’s daily needs. Provinces we do not need. Only Quebec should require a separate legislature, and that only because they wouldn’t have joined otherwise. For the rest, they’re mostly the domains of short-sighted charlatans like the premier of Alberta, who couldn’t become prime minister the regular way, so he’s trying something else. All this is tiresome and anti-productive. We should either bury these hatchets or, what the hell, see if the U.K. will take us back.
—Tom Karsay, Ottawa

The shock of the new

In our editorial in the January issue, we wrote that technology makes life easier—until unforeseen and unintended consequences actually make things worse.

Being 75, I am amused at your piece about touch screens in unwise places. Tail fins and push-button transmission happened six decades ago. Modernizing a wee bit too far is not a new thing. Sometimes it is how we learn the location of Too Far.
—Roger Pollock, Clarington, Ont.

In December, Liza Agrba wrote about the new Centre for Aerospace and Aviation at a Centennial College outpost at Downsview Park in Toronto.

In the spirit of “Wexit,” I would like to cite the new Centre for Aerospace and Aviation (“Come land a job,” Aviation, December 2019). As a person who lives a kilometre from the Pacific Ocean, I have no idea where Centennial College or Downsview are. I could not discover that information anywhere in the article. I suspect they are in central Canada, somewhere. Canada is the second-largest country in the world by land mass. You purport to cover Canada. Please inform us on the location of your areas of reporting. This is the kind of arrogance and oversight that contributes to Western Canadians being “ticked off.”
—Ann Sturrock, North Vancouver, B.C.

In December, Ottawa Bureau Chief John Geddes wrote that the days of endless deficits are back, and with minority government pressures and economic trouble ahead, that’s a problem.

John Geddes describes the Chrétien government’s feat in wiping out the deficit as “a signature achievement” (“Hey big spenders,” Politics, January 2019). He suggests they were responding to a “looming financial crisis.” Why is he perpetuating this mythology? By 1995, the major battles had been fought. Federal revenues were greater than expenses, excluding debt payments. NAFTA had been signed. The GST had been introduced. Crippling interest rates were already falling fast. Chrétien failed to follow through on his campaign pledge to cancel the GST. Martin never intended to balance the books. They take credit for victory without having fired a shot.
—Mike Dawson, Goderich, Ont.

In October, Allen Abel wrote about a resurgent Elizabeth Warren‘s campaign for the Democratic nomination as the party prepares for a 2020 showdown with Donald Trump.

By the end of Allen Abel’s piece on Elizabeth Warren, I was chuckling and shaking my head. It’s not so much that Abel spent a lot of time on Warren’s DNA woes, with terms like “connivance” about a claim that never got her a job or any other thing of value; my real concern is the people he interviewed. They were virtually all either the extremely wealthy or those who manage investments for them (save for one Native American who thinks poorly of her ancestry claims, without mention of the many Indigenous friends she gained when she announced one of her plans to remedy their various needs. Has any previous candidate done that for Native Americans?). At ﬁrst I thought Abel was interviewing his way through the Hamptons and Wall Street to provide a contrast to later interviews with that vast majority of Americans who earn only five figures, plus a quote or two from six-figure white-collars who would actually see a modest tax increase. There are already many complaints about journalistic bias from those who interview just the white people eating in a Wisconsin diner rather than the black people who work in the kitchen and clean the toilet. Abel managed to jump right past that to interview only the guy who owns the chain of diners. He should be embarrassed.
—Roy Brander, Calgary

I’m not sure how the profile piece on Elizabeth Warren got past the fact-checkers. The contributor seems to get his information from Trump tweets. He repeatedly characterizes Warren’s self-identification as Native American in the ’80s as a “lie” or “fib,” which, even if Warren’s family tradition of Cherokee ancestry had been mistaken, is still an inaccurate characterization of a statement made in good faith without the intent to mislead. In fact, DNA results have confirmed Warren does have a Native American ancestor, giving her a genetic makeup of 1/32th to 1/1000th Native American ancestry (the article misleadingly gives only the lower outside range as “possible”). What percentage of ancestry is required before an individual should identify as a particular ethnic group is a controversial question with no clear answer. That this is even an issue is due to an unscrupulous narrative promoted by Warren’s political opponents, which your contributor seems to have uncritically accepted. Meanwhile, he left out what is most important and interesting about Warren—her lifelong fight for consumer protection and banking reform. I have been very impressed by a number of great examples of investigative journalism in Maclean’s over the past year, including the pieces on the legacy of Canadian involvement in Afghanistan and the evacuation of the White Helmets. Maclean’s is a great magazine, but this piece does not meet the standard.
—Fiona Gregory, Edmonton