Opinion: Bruce Anderson on how Canada's democracy is vulnerable to modern forces that our current election rules are ill-equipped to handle 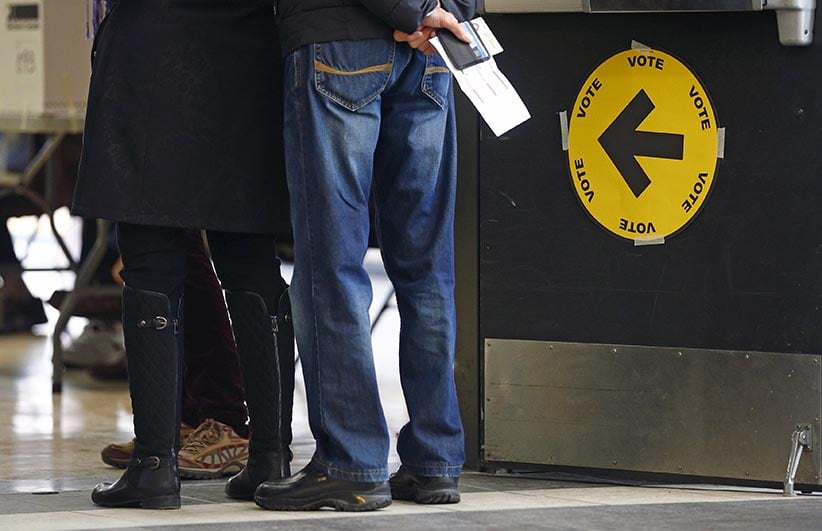 Voters wait in line at a polling station in Quebec City, October 19, 2015. Canadians go to the polls in a federal election on Monday. (Mathieu Belanger/Reuters)

Political watchers were stunned a year ago when reality-TV personality Donald Trump swept past a field of seasoned politicians to win the biggest political prize in the world. Propaganda dressed up as news stories flooded the screens and phones of voters vulnerable to persuasion, in districts critical to the outcome of the race. Hillary Clinton bought about three times as much traditional TV advertising as Trump, proving that TV advertising is no longer the decisive weapon it was in today’s political arms race.

But like or loathe Trump, no observer of America’s 2016 presidential election can afford to be sanguine about what it revealed about the vulnerability of elections everywhere. Even if the Russians hadn’t been involved in a manipulation of American democracy, what happened revealed a serious risk to democracies everywhere.

Surely, though, that could never happen in Canada, right? If politeness was a sport, Canada would win all the medals. You might well imagine, given who we are, that Canada has stringent rules against offensive or misleading communications in political campaigns. But the truth is that Canada’s rules about political advertising, built for a simpler time, have been too flimsy for decades. Today, they’re stunningly inadequate.

Canada’s short, typically 37-day campaigns means we are especially vulnerable to manipulative digital campaign techniques, because it might take longer than 37 days to even know that something untoward is happening. We need to figure out what protections are needed to safeguard our democracy—and we need to get serious about it now.

We mostly rely on social norms to shame partisans who campaign inappropriately. Sometimes it works, sometimes not so much. When Kim Campbell’s campaign team devised a TV ad that seemed to make fun of Jean Chrétien’s facial features, outrage caused the ad to be taken down quickly. But when Preston Manning’s Reform Party ran an ad arguing it was time to be done with prime ministers from Quebec, the furor it caused was the sort of free publicity its authors were hoping for—and the ad kept running.

However, at least in those examples, the advertising was out there for everyone to see, reflect on, discuss. Today, the advertising you might be exposed when you power up your device in the morning could be very different from what your neighbour across the street sees. It might not look like an ad, but rather a news story on a campaign issue you are interested in. And it might not be true.

Indeed, election jiggery-pokery has existed forever, but one of our main defences was that the fourth estate could expose it and help limit abuses. But the Internet has swamped traditional ways of delivering news to people, and traditional news organizations are barely keeping the lights on. Investment in watchdog journalism is dwindling, and the reach and influence of journalism is dissipating too. As fake news rises, we’re seeing an important bolt loosening in the machinery of our political system.

Libel and slander laws are another form of protection, of course, but modern campaigners know many ways to make their point without crossing those legal lines. Canada’s Advertising Standards Council operates a voluntary code of good conduct, but the Code only applies to product and service advertising, not political communications.

I’ve worked for both Progressive Conservative and Liberal campaigns. The last time I worked as a partisan was in 2004, and I recall sitting in a room with the ad team and encouraging them to push to the very limit of what they could say to worry voters about Stephen Harper—only to find that there were no meaningful limits. (To this day, I regret having momentarily joined in the race to exaggerate and demonize; that others were doing it is no excuse.)

Compounding the problem of too few protections against toxic political communications is that “advertising” isn’t what it used to be. Rules requiring broadcasters to offer equal time to political competitors are comically anachronistic in a world money is shifting quickly to digital advertising. And the rules about accounting for spending on web-based communications are also in need of deeper reflection.

Consider the following guidance to campaigns, from Elections Canada: “Election messages communicated over the Internet are election advertising only if they have, or would normally have, a placement cost ….The following are not election advertising: messages sent or posted for free on social media platforms such as Twitter and Facebook, messages sent by e-mail or through other messaging services (including texts sent through a cellular or mobile network), content posted on the candidate’s website.”

Powerful messages can cost nothing to place; they work when hundreds of thousands of people share them with followers and friends, and often can generate even more exposure through free coverage in news stories. If campaigns pay to amplify posts, that spending must be recorded as an election expense, but the costs pale in comparison to the days when reach and frequency required buying primetime TV ads.

Recent Canadian elections have also seen a growing debate about “third parties”—groups that want to help one party or candidate to win or another to lose. The Internet raises the stakes of this debate exponentially. Today, a third party could spend an unlimited amount of money on “non-partisan” banner ads to drive millions of eyeballs to YouTube ads, as well as build and operate a website designed to support one political party, with none of this activity considered election advertising.

Who can fund third parties? Foreign entities can’t spend money on “election advertising,” but if they stick to examples described above, there appear to be no prohibitions on where the money can come from.

Watching multiple investigations about subterfuge in U.S. politics should be a wake-up call for Canadians and their political parties. We need better tools to protect our democracy from abuses we couldn’t have imagined when our rules were drawn up. As we watch Google, Facebook and Twitter wrestle with what responsibility is properly theirs, one thing seems clear: leaving it entirely up to corporate giants is probably not the smartest approach.

So, what would help?

Our parties must accept that they are all vulnerable if election spending limits mean little and digital campaigning is a free-for-all. Facebook, Google, and Twitter, as well as broadcasters, Internet service providers, and news organizations should tackle these questions together with political parties, looking for sensible ways to balance the virtues of free speech with the risks of fake news, the independence of private enterprise with the protection of public interest. A fast-paced, technologically savvy, and multi-partisan task force should be struck to identify threats and propose solutions.

With only 24 months to go till the next election, it’s time to get serious about the gaps in Canadian election safeguards. The rancour and division we’re witnessing in the U.S. is a worrying spectacle—and one more cautionary tale about how the power of the Internet can disrupt the ways we think about and manage how we live.