Amir Attaran and Jacob Shelley: By not requiring COVID-19 vaccination like the world’s top institutions, Canada’s universities are making themselves the dunces of COVID-19 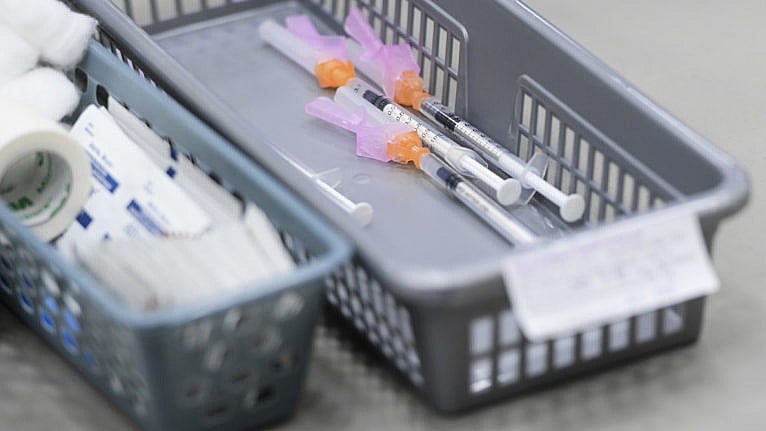 Needles containing COVID-19 vaccine wait to be administered to patients at a clinic in Ottawa on March 30, 2021 (Sean Kilpatrick/CP)

Amir Attaran and Jacob Shelley are professors who specialize in health law, at the University of Ottawa and Western University, respectively

Their names are famous: Berkeley.  Caltech.  Harvard.  MIT.  Princeton.  Stanford.  Yale.  Nobody doubts their excellence. And lately they are joined by an excellent Canadian institution, Seneca College.

What does it take to join this exalted company? All the institutions we just named have strict policies that students, staff and faculty must be vaccinated for COVID-19 to come on campus this coming academic year. Those who do not vaccinate, without a very good reason for exempting themselves, simply must stay away. By ejecting the unvaccinated, there will be no superspreading in crowded dorms, classrooms, dining halls, gyms and parties.

Over 400 American colleges and universities have now chosen mandatory vaccination for the new academic year. The inevitable legal challenge has happened, and Indiana University won the right to require vaccination on campus. Naturally the usual cultural fault lines persist, so conservative institutions, particularly Christian ones, refuse to make vaccines mandatory.

But there is no disagreement among the very best, and of the top 10 American universities, all 10 require everyone be fully vaccinated.

Which makes it very disappointing that in Canada, no institutions have done likewise, except for plucky Seneca College. Not the Universities of Alberta, British Columbia, Calgary, Manitoba, Montreal, Ottawa, Saskatchewan, Victoria or Toronto.  Not Dalhousie, Guelph, Laval, McGill, McMaster, Memorial, Waterloo or Western.

All these Canadian colleges and universities, plus those we have not named, are acting as if there is not a pandemic happening, and vaccines are not the way out of it. Their stance is, to put it politely, anti-scientific for institutions of higher learning, palpably inferior to the world’s best, and fatal to the feel-good bromide that “good” Canadians care more for the health of their neighbours or community than “selfish” Americans.

Canada’s universities and colleges must know they are in the wrong, but lack the courage to behave differently, and instead offer spurious excuses for not making vaccination mandatory.

Western University President Alan Shepard is more vocal than most about why his institution refuses to implement a campus-wide vaccine mandate (despite the half-step of requiring students in residences to be vaccinated). He claims that Western is “very comfortable” encouraging but not requiring vaccination, because it has “gone as far as [it] can go legally.”

But as law professors, we see no truth in that. Every college and university already has a host of health and safety rules which employees and students must follow. A new rule requiring vaccination is perfectly legal, provided that limited exceptions are made to accommodate those having demonstrable, sound medical or religious objections.

In Ontario, where Western University is located, schools already require vaccination for some diseases, so higher education obviously can too. Many campuses, including Western, already have policies in place to limit the spread of aerosols—namely, smoking bans—as if the virus does not present a far more pervasive airborne threat. Nor is there is a credible argument that campuses open themselves to liability by requiring vaccination, not when they serve alcohol, have rugby teams, and skydiving clubs, which are far more dangerous. The liability excuse is a comically weak bogeyman for inaction, because there has never been a successful lawsuit for vaccine injuries in Canada.

Deep down, the universities and colleges must know that their legal excuses are false pretexts. So they are gamely practicing talking points for when things turn sour. Defending Western’s opposition to mandatory vaccination, Dr. Shepard exuded profundity and answered that, “The future is never as clear as the past is.”

Okay, sure. But for universities that teach, you know, science, it should not be so terribly difficult to forecast that future for a viral pathogen that we now understand very well.

Currently in Canada, the vaccination rate for college- and university-aged adults (18 to 29) is awful.  Just 38 per cent are fully vaccinated, which makes them ripe to drive the fourth wave. Since it is now the end of July, and it takes two weeks after the second dose to become maximally immunized, there is hardly any time left to reach these incoming students before classes begin. Unless universities and colleges turn instantly to require full vaccination, it seems likely that half or more of students will be arriving on campus unimmunized, or at best with a single dose that is scantly protective against the aggressive Delta variant.

But rather than plan in a timely way as American institutions did—the University of California system, which is the world’s largest, launched its mandatory vaccine policy last December—our backwards Canadian institutions are fudging science and pretending half-measures will protect students.

Take the University of Ottawa. It and many other universities have gone partway to require some vaccination—just one dose!—but only for students living in university residences. (Western requires students in residence to have received one dose within two weeks of arrival and their second dose in the fall.)

The trouble is, one dose does not make for immunization; absolutely no health authority in the world says that it does.

We asked the University of Ottawa why, instead of this unscientific half-measure, it is not doing like the Berkeleys, Caltechs, Harvards and Stanfords of the world and requiring full vaccination for all on campus. The university answered that it is still “exploring all angles regarding this question”—a rather backwards place to be in late July—but declined to provide a reason for rejecting the example of the world’s best. We got a similar answer from Universities Canada, the umbrella group of higher education. It says that Canadian universities “are monitoring the trajectory of the pandemic and vaccinations with great interest so they can adapt policies”—which is just a fancy way of saying that the plan is to kick the can down the road.

This sort of dodging is immoral. If a doctor urged patients into society with just one dose of a two-dose vaccine, obviously that would be called medical malpractice—so how is it okay for institutions like the University of Ottawa with a medical school to do likewise? When their half-vaccinated students land in co-op placements or internships in the community, including potentially where they meet vulnerable seniors or unvaccinated children, is that okay too? All the Canadian institutions that are requiring no vaccination, or half-vaccination, are so scientifically lost at sea that they cannot teach health promotion or medical ethics without farcically conceding their own misconduct.

If Canada’s colleges and universities do not act, the communities where they sit should force them. Indeed, administrators seem eager to pass the buck to local health authorities, and for their own safety, the local authorities ought to oblige. The U.S. Centers for Disease Control reports that last year, before vaccination was possible, colleges that diminished their student impact by remote instruction brought about an 18 per cent decline in COVID-19 disease in their surrounding community, while those that did not brought about a 56 per cent increase. The difference would be greater now, with Delta circulating. Not vaccinating campuses fully is guaranteed to spread a fourth wave to the communities which host them.

As professors, these concerns weigh heavily on us, and colleagues we know say it weighs on them too, even though most will not volunteer their names to say so.  Nobody wants to be part of a college or university that is scientifically and morally backwards, which is why student unions and faculty associations across the country have called for vaccinations to be mandated. Nobody wants to lead students, families and their own community into avoidable, but ignored, danger.

When full vaccination and immunity is presently the exception rather than the rule, we cannot recommend that students return for in-person classes, because they can be among the unlucky few who get seriously ill or they can pick up an infection that they bring home to someone more vulnerable.  That is hard to say, because we miss being on campus as much as anyone. But when the universities and colleges act negligently, they endanger the young adults in their care and fail in their duty to act in loco parentis.

The risks would be much reduced if Canadian colleges and universities aspired to be the best in the world. Indeed they should all desperately want to be more like Berkeley, Caltech, Harvard, MIT, Stanford or the rest of the top tier. But aspiring to anything beyond mediocrity is not very Canadian, and come to vaccination, there are two possible explanations why:

(1) Canada’s institutions of higher learning do not really believe that it is important to be driven by science, so they are comfortable turning their backs on vaccination, or;

(2) Canada’s leaders, both in higher learning and in government, lack the courage to make difficult and controversial decisions during a pandemic, even if it puts lives at stake.

Which of these explanations do you prefer? The first has dreadful implications for Canada’s ability to make itself a science-led, high-tech, prosperous society when our global competitors are doing exactly this. The second shreds our national mythologies of being well governed and being humane. Either way, our colleges and universities are guilty of advertising to the world that Canada is not a serious place.

Only mandatory vaccination gives Canada a rightful claim to excellence. We agree with Seneca College President David Agnew who says “if we’re serious about protecting the health and safety of all of our community then it’s the right thing and the logical thing to do.”

But right now the colleges and universities are doing the wrong thing, for the country surely, but especially for the young adults in their care. They have lost their way and must mandate vaccinations in very few days that remain before campuses fill up. If they do not, they are betraying their students and the communities where they are situated—and they will deserve the blame and condemnation when infections burn bright on campus this fall.

CORRECTION, July 29, 2021: An earlier version of this story indicated that Western will only require students in residences to have one COVID-19 vaccination. In fact, it will require students to get their first shot within two weeks of arriving and second shots at some point in the fall.)