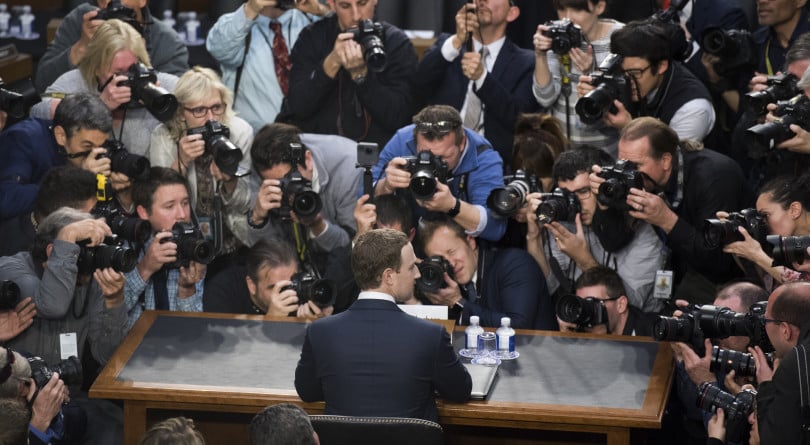 Facebook CEO Mark Zuckerberg arrives to testify before a joint hearing of the Senate Judiciary and Commerce Committees on the protection of user data in Hart Building on April 10, 2018. (Photo By Tom Williams/CQ Roll Call)

“It’s complicated.” Among the 11 options Facebook allows users to describe their relationship status, this one probably best describes the connection we all have with the social media networking giant itself.

On the “like” side of the ledger, Facebook makes it possible for its 23 million Canadian users to share and organize many meaningful aspects of their lives with family, friends and business associates. Few technological innovations have done so much to keep so many people in touch, and this ought to be recognized as a substantial communal good.

However, all this sharing, posting and networking comes at a cost—most significantly in a creeping loss of privacy as Facebook invents new ways to monetize our personal details. Further, by its sheer utility and scale, its website is now a major source of public news and (mis)information. And in these twin roles as guardian and proprietor, Facebook has proven itself to be an unreliable defender of the public interest. For people who want to keep their news real and their lives private, there’s little to “like” here.

So where do we see this relationship going?

The recent hearings in Ottawa of the International Grand Committee on Big Data, Privacy and Democracy offered a revealing look at Facebook’s many problems, and how little the ﬁrm seems to care about fixing things. Comprised of parliamentarians from over a dozen countries focused on establishing global principles regarding social media and technology, the committee summoned Facebook CEO Mark Zuckerberg and COO Sheryl Sandberg to account for their firm’s actions. Neither cared enough to appear. Last year, however, Zuckerberg and Sandberg appeared separately before the U.S. Congress.

Such nonchalance is disappointing. Canadian citizens—just as much as Americans—deserve answers from the highest level of Facebook. Its response to the Cambridge Analytica breach, in which the personal data of millions of Facebook users may have been improperly shared with the political consulting ﬁrm, remains a serious problem for Canada’s Privacy Commission. Recently, commissioner Daniel Therrien announced legal action against Facebook after it refused to accept his recommendations for tougher safeguards on disclosure and consent. “The stark contradiction between Facebook’s public promises to mend its ways on privacy and its refusal to address the serious problems we’ve identiﬁed … is extremely concerning,” he declared. In the U.S., Facebook is facing an expected $5-billion ﬁne for the Cambridge Analytica scandal. (Such a punishment likely explains Zuckerberg and Sandberg’s greater efforts at outreach to Congress, and is an argument in favour of Therrien’s call that he be given similar powers in Canada.)

Equally disturbing is Facebook’s response to a video of U.S. House Speaker Nancy Pelosi that was deliberately altered to make her appear drunk. Instead of taking it down, Facebook says it “heavily reduced” the video’s rotation in personal news feeds. As one of the world’s biggest distributors of news, this is a shocking repudiation of journalistic obligations. If Maclean’s, for example, discovered something on our website was untrue, we wouldn’t simply reduce its “frequency.” We’d correct it. Period. Facebook should express a similar allegiance to truth and trust, particularly in light of the upcoming federal election and the existential threat fake news poses to democracy.

Among those who did testify before the committee in Ottawa, some critics called on the federal government to impose a temporary ban on the firm, as was the case in Sri Lanka following the recent terrorist attack, while others called for stricter regulations or bans on particular forms of ads and behaviour. What Canadians want most of all, however, is for Facebook to take their concerns seriously. The absence of Zuckerberg and Sandberg in Ottawa suggests this is not the case. As does Facebook’s lack of action on the privacy commissioner’s concerns. And its response to fake news. And its divergent political strategies in the U.S. and Canada. And on and on.

This article appears in print in the July 2019 issue of Maclean’s magazine with the headline, “The unlikeable Facebook.” Subscribe to the monthly print magazine here.