Can't I be a parent—and a politician?

Joe Cressy: In September, I'll be the first person ever to utilize the City of Toronto's new parental leave program for city councillors. But for some people, my decision hasn't been well-received. 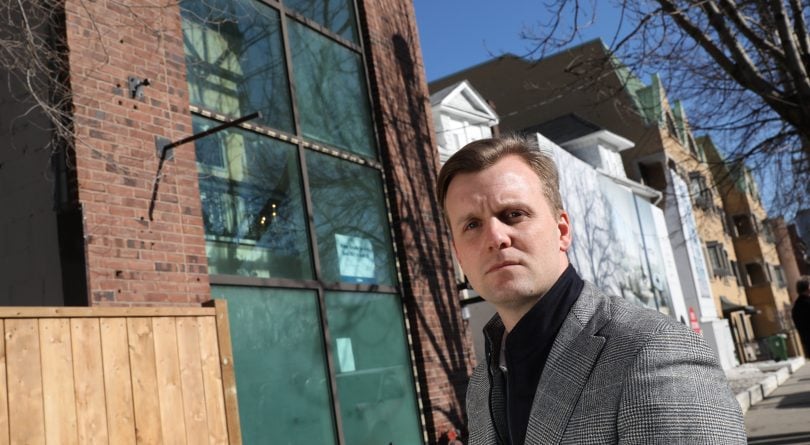 Councillor Joe Cressy in front of 348 Davenport Rd. in Toronto. In the build-up to the opening of the new drop-in on Davenport The Interfaith Coalition to Fight Homelessness has organized clergy and places of worship in support of what will be a new emergency shelter downtown on Feb. 16, 2018. (Rene Johnston/Toronto Star/Getty)

I always knew I wanted to be a parent. But when my friends started to have kids, I got to tag along to park play dates, skating lessons and the colourful explosions of toddler birthday parties. Then, my desire to become a dad was clear.

As a city councillor in downtown Toronto where I represent over 110,000 constituents, I regularly work more than 80 hours per week. Early mornings, evening meetings, and weekend community events are standard. I had no intention of being the kind of parent who saw his kids for only an hour a day; who doesn’t know their shoe sizes or their friends’ names. To me, being a parent meant being an engaged and active one. I also wanted to be an equitable partner to my wife, Grace, which meant working together on the domestic labour of raising a new human being. With my job, it was always going to be a tricky balance, but we talked it through and decided we were up for the challenge.

The first thing to figure out was that wild, magical and exhausting first year—the year where we would learn to be parents and our kid would learn a million exciting things. In many ways, these first 12 months would set our family dynamics in the years to come. We decided Grace would take the first nine months, applying for employment insurance (EI) benefits during that time, and I would take the last four months, after which our son would go into childcare (if we’re lucky enough to find a spot in Toronto). Both Grace and I are deeply committed to our careers, so this approach seemed like the best plan for us.

MORE: Why parental leave rules are shutting out dads

Last November, our son Jude was born. He’s incredible, even when he keeps us up at night. Grace is currently on leave taking care of him, and starting September I’m set to be the first person ever to utilize the City of Toronto’s new parental leave program for councillors. This has proven to be quite controversial because as people keep telling me, “politicians can’t take parental leave.” Thankfully, things are changing.

A number of years ago, women councillors across Ontario started speaking out about the unacceptable expectations placed upon them as new mothers and elected officials. They successfully petitioned the province of Ontario to require municipalities to develop parental leave policies for elected officials. Similarly, at the federal level, MP and Cabinet Minister Karina Gould famously took parental leave in 2018 despite the absence of a formal policy. In doing so, she helped spur the Canadian Parliament into establishing a parental leave policy (MPs can take up to one year) in 2019. And in the United Kingdom, after a high-profile incident where Labour MP Tulip Siddiq was forced to reschedule a planned caesarean in order to attend a key Brexit vote, the House of Commons is now piloting a one-year parental leave policy where MPs can take leave and assign a proxy vote while they’re away.

In the City of Toronto, under the policy established in 2018, city councillors are entitled to take up to 20 weeks of parental leave. During that time our offices stay open, our staff continue to work and respond to local matters, but there is no parental leave replacement or proxy vote. It’s a problem that I’m trying to fix. Under the current policy, city councillors can take parental leave but we have to choose whether to miss key votes or miss time with our children. In many workplaces, employers fill the parental leave position in order to ensure the work continues to get done. But for politicians the expectation remains that we will—and can—continue to do both.

I’m lucky to have incredible staff who are well-versed in addressing constituent concerns, media inquiries and city policy challenges, and I know they’ll be as excellent, responsive and helpful as they always are while I am gone.

In the absence of a policy change permitting councillors to have a parental leave replacement or assign a proxy vote, I plan to attend occasional city council meetings for key votes (with a baby in a carrier). But that hasn’t stopped people from telling me that my 16-week leave means I’m no longer qualified to be in office; that indeed, no politician is entitled to parental leave of any kind. In a throwback to the ’50s, Toronto Sun columnist Sue-Anne Levy described my forthcoming parental leave and attempts to improve the policy as follows: “Like a typical entitled millennial, Cressy wants to have his cake and eat it too.”

This is an incredibly toxic mindset. Not only does it deny politicians—who, despite some Twitter rhetoric out there, are indeed human—and their children essential bonding time, it acts as a deterrent to anyone interested in running for office and having a family.

Given that the majority of labour around child rearing still falls on women, women’s political participation is especially discouraged when we tell potential politicians that they can’t combine family life and political office, or that they need to wait until their kids are adults to run. And for men who actually want to hang out with their kids, a lack of parental leave is a frustrating roadblock.

I’m aware that elected officials are far from the only ones facing challenges around leave. Even for those whose jobs are safely held for as long as 12 or 18 months, making ends meet on the reduced income of EI is daunting. Freelance and contract workers face even more complicated and difficult leave situations. And that’s not even delving into the more subtle negative consequences of taking leave, which again, often effect women more seriously—being sidelined from important projects, shuffled away from key accounts or clients, or being perceived as less dedicated to work after having children. All of these things force ambitious workers to view having children as a professional detriment. It’s an unnecessary and sad situation for a country like Canada to find itself in.

The solution though is not to drag all parental leave policies to the lowest common denominator, it’s to improve leave for all parents. It’s unacceptable to make parental leave, bonding and childrearing a luxury or a fringe benefit offered to an elite group.

The way we approach parental leave is a reflection of where our social, economic and political priorities lie. I want to see leave policies that show we are a city and a country that values gender equality, balance and workers as people with full, dynamic lives both in and out of the workplace.

This is very much about the kind of parent, partner and man I want to be. But it is also about all the people who dream of running for office and being a parent, just like I did. I don’t want those people to feel they have to choose. If they do, we all lose out on some potentially amazing contributions to the leadership of this country.