Opinion: The first Ontario PC leadership debate was a bit of a bust—but the rookie candidate showed signs that she could win the party's top job 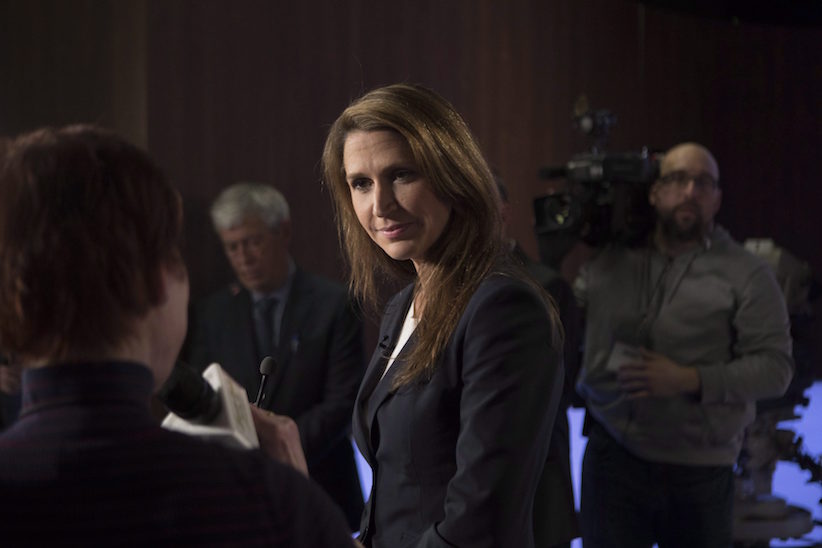 There are four people running to be the leader of the Ontario Progressive Conservative Party, and two of them have a good chance to win, if their performance in the first “debate”—more of a gathering of friendly rivals hosted by TVO’s Steve Paikin on Thursday—can be any fair measure.

Feel free to skip the debate in its entirety. As Paikin himself almost conceded at its outset, it was less of a debate and more of a job interview—and it felt about as interesting as one. (Hug a human resources professional, folks.)

There was little disagreement between the candidates— Caroline Mulroney, Christine Elliott, Doug Ford and Tanya Granic Allen—and little veering from talking points. No one embarrassed him or herself, nor did they embarrass a party that is already doing everything possible to staunch the grease fire of former leader Patrick Brown, who helpfully decided to launch his redemption tour just ahead of the debate.

The poorly prepared Doug Ford was ill-versed on policy, and he lacks the easy charisma of his late brother, Rob—but he also didn’t come across as an unstable or chaotic future leader.

It would be easy to write her off entirely as a distraction—but given that she was able to raise the $100,000 entry fee to the leadership race through donations, and these wild political times, who knows?

Elliott, a former MLA and the widow of late federal finance minister Jim Flaherty, is attempting a leadership run for the third time. The debate allowed her to demonstrate her finer grasp of provincial policy. But neither elections nor leadership races are generally won by a test of which candidate can best recite the platform. Elliott is a credible potential leader, but she’s not terribly sparkly and, worse, already branded with the scarlet L.

But most eyes were on Mulroney, who is branding herself as the generational change many Ontarians are hoping to see at Queen’s Park. However, although the daughter of former prime minister Brian Mulroney could mark the establishment of a political dynasty, she has never been elected to office. This debate represented her first major public test.

Youthful and poised, it was not difficult to picture her as a premier—though the format of the debate made it impossible to guess how she will hold up in a real debate against a more experienced rival like Ontario Premier Kathleen Wynne.

On most policy matters, the candidates were aligned—expressing trepidation on minimum wage increases and marijuana policies—and they abandoned substantive chunks of the policy platform that the party had spent 18 months writing and branding around Brown. All of the candidates, for example, opposed the carbon tax Brown was in favour of, prompting Paikin to challenge them to find ways to fund their platform’s promises absent a now-nixed revenue stream.

“One thing that we would do is a value-for-money audit,” Elliott said. “I want to audit Kathleen Wynne’s economic mess that she has made of Ontario. We can find millions of dollars of savings there.” Look at the money the Liberals wasted, she added, making the obligatory partisan nods toward the gas plant and e-health scandals. “We can find those savings.” Mulroney re-iterated Elliott’s position on the audit, tapping the reliable well of “culture of waste at Queen’s Park.”

This conformity is a bit baffling. The federal government has threatened to impose carbon taxes on provinces that fail to enact their own climate change policies. This should make this policy a political shruggie for potential premiers.

Ford, meanwhile, promised to take the federal government to court over the matter. This is empty bluster. Manitoba has already sought a legal opinion on the matter, and scholars decided the federal government was within its rights to impose a carbon tax—so it was better, Manitoba Premier Brian Pallister decided, for the province to just do it in house and keep the tax revenues themselves.

Who knows what an actual judge might decide, of course—but wouldn’t it make more sense to offset other taxes instead of fighting an inevitable one? This was an opportunity for Mulroney to set herself apart on a major policy plank that would have maintained the optical integrity of the People’s Guarantee, the party’s platform under Brown. It was an opportunity missed.

She followed with a measured statement about the province’s contentious sex-ed curriculum, saying that while parents hadn’t been adequately consulted, she would leave it untouched. This will alienate some social conservatives, but does have the benefit of eliding old culture-war battles that Wynne could use to her obvious advantage against a conservative party.

Ironically, where Mulroney was at her strongest—the moment at which she seemed most ready for the position she is seeking —was when she answered to her biggest weakness: that she lacks political experience.

“Kathleen Wynne has a lot of political experience and that has gotten the province into the situation that we’re in today,” she said. Referring to her fellow candidates, and noting that she was the only one who had actually won a nomination for the coming election, she added: “Nobody here put their name forward and thought that was important until the top job became available.

“What people are looking for is something different. They want a new approach to politics—they don’t want a career politician.”

Mulroney herself couldn’t have plotted out this ambitious political arc. But if she is going to win this, she needs a mastery of talking points and policy. She will also need the ability to recover from a rhetorical hit, and to deliver one. It was impossible to gauge how well she could do either from this debate; that’s a skill that requires a kind of confidence in the limelight that can only be earned with practice. She would be a much easier pick for leader after only a few years in office.

However, if the coming election hinges on a question of an unpopular Wynne against an unseasoned Mulroney, that’s a frame the Ontario PCs stand a good chance of winning. After all, for as much as people don’t know about Mulroney, there is no point in voting for someone you already know you don’t like.