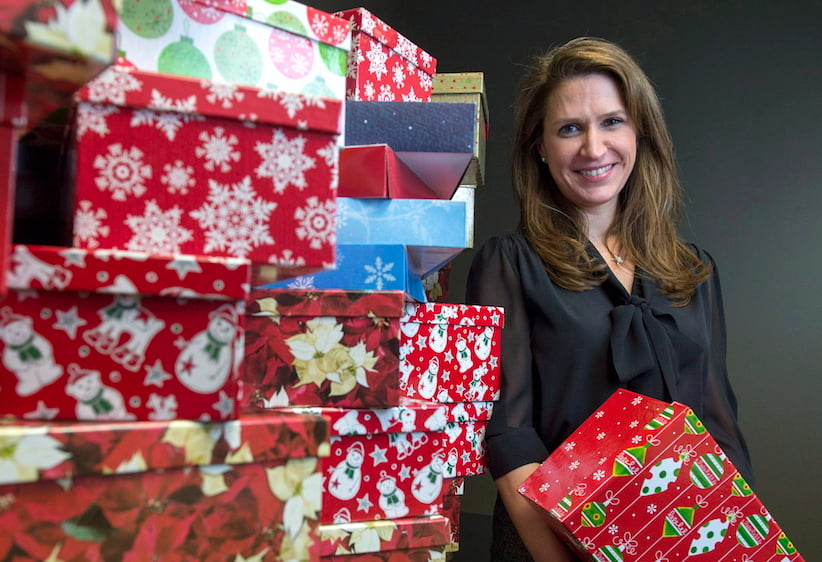 The Shoebox Project co-founder Caroline Mulroney, daughter of former prime minister Brian Mulroney, is photographed in Ottawa, alongside completed shoeboxes filled with personal items, to be given to women in shelters over the holiday season on Monday, Dec. 2, 2013. THE CANADIAN PRESS/Justin Tang

Caroline Mulroney’s resume is so blinding, the biography section of her freshly launched campaign website can afford to ignore the very thing Ontarians are most likely to know about her: that she’s Ben Mulroney’s sister.

All kidding aside, Mulroney’s campaign site—launched in support of her just-announced run for the Ontario PC nomination in York-Simcoe—also forgoes all mention of father Brian, Canada’s 18th prime minister (and mother Mila, while we’re at it).

It’s certainly not that Mulroney is thin on material. She’s a Harvard graduate who then studied law at NYU before working in finance for 20 years while starting a charity on the side—all the while helping to raise four children. It’s not supply teaching and snowboard instructing, but it’ll do.

Mulroney’s choice to stand on her own two feet is therefore admirable, even if it is an abnegation of reality. Whether she likes it or not, every single piece of news copy about her candidacy will be festooned with “Muldoon” references.

Her father’s absence is undoubtedly part of a strategy to underplay her ambition; this isn’t the second coming, even if some Ontarians might be praying to be rid of Kathleen Wynne’s Liberals.

York-Simcoe is a safe Tory seat and the Ontario PC Party has a new, young leader in Patrick Brown. Mulroney is meant to be part of an impressive crop of candidates, not the silver bullet to ending 14 years of Liberal rule.

But there’s underplaying it, and then there’s dosing your candidacy in NyQuil, which is where Mulroney is headed. If you didn’t know Mulroney’s pedigree you’d think her identikit campaign launch video was that of a no-hope candidate in an unwinnable riding.

“I’ll stand up for you and work for a better future for your family,” Mulroney says in her video. “I love this province and I believe that Ontario can once again be the engine of the Canadian economy,” she adds on her website. Was the degree from Harvard a PhD in boilerplate?

This is where a little behind-the-scenes (if not above board) counsel from the old man might have helped. You might not have liked Brian Mulroney, but he could command a stage. She needn’t warble “When Irish Eyes Are Smiling”, but a twinkle of stardust would have helped her launch in this, the Rolling Stone era.

Lord knows Justin Trudeau—another political scion—doesn’t shy away from invoking his father’s memory. Most of us only found out about Justin Trudeau because he delivered the eulogy to his father at his funeral.

Now, Brian Mulroney isn’t about to gift his daughter with a similar “hello” moment, but the comparison with Trudeau can still be instructive for Caroline Mulroney as she sets out on her political career.

In many ways they’re polar opposites. Mulroney is hyper-credentialed, where Trudeau is not. Trudeau is intensely charismatic, where Mulroney has demonstrated little to date. Mulroney’s expectations are lower, while Trudeau’s were sky high (in part due to the dire health of his party at the time of his arrival).

What the Trudeau phenomenon should highlight to Mulroney is that credentials are no longer enough to carry the day. Style can help override substance (for a time, anyway) but the reverse isn’t now as likely to be true. You can have a CV like Caroline Mulroney’s, but if you can’t sell yourself like Trudeau can—particularly to younger voters who don’t watch television—you’ll have trouble catching on in the digital age.

Of course, Trudeau’s unique blessing is that his resonance with younger voters is echoed by the older voters who still revere his father. Caroline Mulroney’s father isn’t nearly as loved, and so she’ll enjoy no similar boost on that front, even if she isn’t looking for one.

Again, the lo-fi aspect to Mulroney’s launch might also be by design. It could be that Caroline Mulroney’s ambition is limited to serving the fine people of York-Simcoe well, as her predecessor Julia Munro has done for the past 22 years.

But there’s a reason Tories—both provincially and federally—have dreamt for a Mulroney candidacy for years; she’s the closest thing the Tories have to royalty. That goes double for the ever-shrinking progressive conservative wing of the federal party.

If Caroline Mulroney had wanted to scotch rumours of an ambition greater than what she signposted today, then it would already have been done. Her low-key launch, then, is better read as a play for the long haul.

And so the journey of a thousand miles begins with today’s first tentative step. Let’s see if she learns Trudeau’s lessons along the way.