Caught between a rock and a hard place, Toronto Police confused the city

Opinion: Toronto has rallied in the face of public security threats in the past. So why didn't the police provide the city with the information it needed? 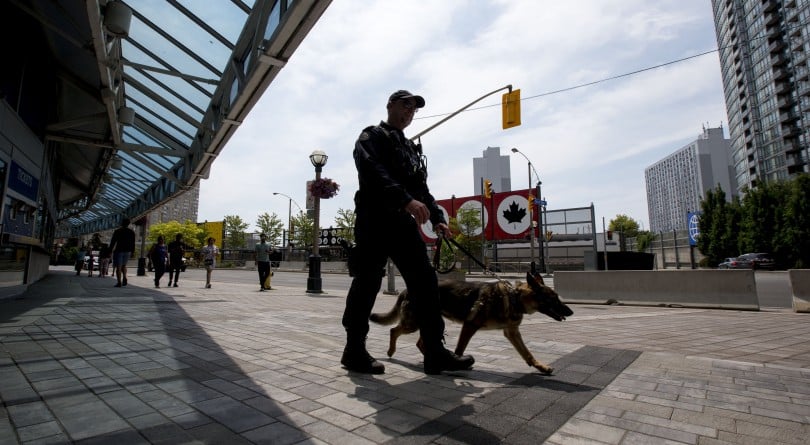 In March of 1986, a letter arrived at RCMP headquarters in downtown Toronto. It was sent by a group calling itself the Armenian Secret Army for the Liberation of Our Homeland, and it threatened that bombs would be detonated in the Toronto subway during rush hour unless the three men who had been charged with storming the Turkish embassy in Ottawa—Kevork Marachelian, Rafi Panos Titizian, and Ohannes Noubarian—were released. In response, then-RCMP commissioner Ralph Culligan, Toronto Police chief Jack Marks, and OPP Commissioner Archie Ferguson coordinated a joint effort to boost security across the city, notifying the public both to keep calm and keep an eye out.

Despite multiple threats carried out over the following week, and the deadline for the release of the terrorists having passed, no such bombing happened. Transit ridership numbers dipped for a few days while car ridership increased, and a few hoaxes (including a call to CTV) caused the occasional train stoppage. But Torontonians more or less continued their business of swarming to the downtown core for the work day, and being expelled back to the suburbs afterwards. And the bombing scare, which amounted to nothing, eventually became something of a rallying cry, reduced to a punchline on a rider’s pithy T-shirt: “I rode the TTC and survived.”

In the age of social media and random mass killings by angry young men, however, organizing a measured response to credible threats isn’t quite the same proposition for law enforcement. Which is why Toronto Police found themselves in a difficult situation on the morning of Thurs., July 12, when they became aware of what spokesperson Mark Pugash called an “unconfirmed, uncorroborated piece of information” that was apparently alarming enough to beef up officer presence around tourist locations and the downtown core. In the wake of the Yonge Street van attack, that strategy made sense. But the event also demonstrated yet again the gulf between Toronto Police officers’ ability to keep the public safe, and Toronto Police administration’s ability to communicate just what the hell was going on.

First, a notice went out from Toronto Police’s Twitter account at 9:30am, informing the public of said piece of information, and advising of the increased police presence. It wasn’t much to go by, but another tweet said that an update was on the way. That came in the form of a press conference delivered by acting superintendent Michael Barsky—in which no new information was provided whatsoever.

Reasonable questions were asked, since police themselves had promised new information. Like: How widespread was the risk? “We received information that there’s a potential risk to the GTA.” And: Was there reason for public concern? “We continue to evaluate that on an ongoing basis.” How should people proceed about their day? “The police presence is here to enhance safety for individuals.” It went on like this for nearly 15 minutes, with Supt. Barsky’s lips moving but no relevant information coming out.

And then, in the midst of rapidly spreading public tension over what exactly caused the police such dramatic yet mysterious concern, the Toronto Police Operations Twitter account tweeted that a 21-gun salute would take place early that afternoon at Queen’s Park. As if it were written for a parody account operated by someone with zero ability to read the room, the tweet ended curtly: “No need for concern.”

The baffling communications strategy from Toronto Police eventually led to nosy journalists mining their sources for more information. A contact of mine explained that the internal communications that officers were getting were just as vague as anything the public was receiving. And then there was a draft of an internal memo leaked to Toronto news media which described security measures being taken to prevent a “potential vehicle ramming attack.” In the absence of clear direction from the police, the public ended up relying on hearsay and internal leaks that, in a vacuum, quickly circulated on social media and wound up on news websites. Rather than updating the public as to the threat, the Toronto Police Twitter account wound up having to engage in damage control regarding the memo.

In situations like this, it’s understandable that Toronto Police would need to play their cards close to the vest. Give out too much information, and risk public panic; give out no information, and if a mass violence incident does occur, all of the public anger and blame eventually falls on their heads for sweeping a threat under the rug.

But the approach they took on Thursday—notifying Torontonians that a threat existed, giving no details as to the nature of the threat, what to look out for, which areas in which we ought to be cautious—was less than helpful. More than 30 years ago, three police agencies successfully collaborated on a public awareness effort at a time when social media and the 24-hour news cycle didn’t yet exist. Torontonians, knowing what to look out for, managed their own safety by changing their means of transit, and managed public safety by reporting suspicious packages. While we are living in a time when news, communications, and social media are inextricably linked, it has been this way for about a decade. By now, police services should be more than aware of the bully pulpit they command on social media, and the role they play in both spreading awareness and reducing misinformation.

And besides, Toronto isn’t new to mobilizing in the face of health and safety threats. This is the city that spent months either masked-up or hunkered indoors during the 2003 SARS outbreak; that took to the outdoors for a mass cookout during a massive blackout only a few months later (the early stages of which swirled with rumours of a terror attack); that has kept calm and carried on this year while public shootings, a bombing in Mississauga, and a mass murder happened in our streets.

As has been said before, police must be held to a higher standard when it comes to keeping the public informed. They carry a responsibility in our society that most other public servants do not have, which also means their measures of accountability are far different. Besides, Torontonians have always pulled together when we’ve needed one another, and with a little direction, Thursday’s haze of misinformation likely wouldn’t have happened. At a time when terror scares have settled into the backdrop of daily life, and a palpable tension exists in places where people gather to visit, commute, and entertain ourselves, the public good is far better served when the police can be clear and forthright about potential threats.