Adnan R. Khan: The lessons from other countries that have had to confront mass graves are clear—shining a light into our darkest corners is the only way forward 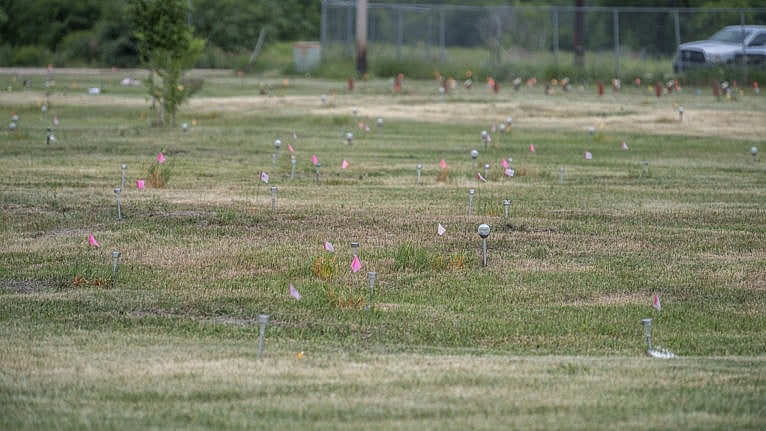 The site of a former residential school where hundreds of unmarked graves were detected, in Cowessess First Nation, Sask., on July 6, 2021 (Liam Richards/CP)

It’s a hard thing to reconcile: the dream of national destiny with the reality of national shame. My father struggled with it. As a Muslim in a fracturing India who lived through the trauma of partition in 1947, he has walked—literally—through fire to what he was told would be the promised land. When Pakistan was created, it was supposed to be a refuge for Muslims fleeing the communal killings on the Indian subcontinent; instead, it turned into a nightmare of corruption and state failure. As an adult, he was forced to flee again, this time to Canada, to another refuge.

To this day, my father still refuses to fully acknowledge the failure of Pakistan. He laments the corrupt leadership and the crimes committed there in the name of Islam. But Pakistan, the idea of it, still endures in his imagination. The national destiny he was promised lingers. It’s hard to let go.

For the first time in my life, I can now relate. For me, Canada has always been that place beyond the parched horizon, that shimmering oasis in a sea of global failures. Over two decades of working in some of the world’s cruelest places, Canada has always stood out for me as an example of what is possible for humanity. The national destiny of Canada, I’ve argued openly, is the hope for the world.

Over the past few weeks, I’ve struggled to reconcile that dream of a pristine, untainted Canada with the reality of the cruelties committed on its soil. I’m not naïve, of course. I’m not only now waking up to the horrors of colonialism and the crimes perpetrated against the original inhabitants of this continent. What I’m waking up to after the discovery of hundreds of dead and buried children—and the knowledge that there are thousands more waiting to be unearthed—is the attempted erasure that has occurred since those crimes were committed.

For me, this is the terrifying truth: As a child in elementary school in Toronto in the 1970s and 1980s, I was taught all the wonderful ways in which the “Indians” cooperated with European fur traders to help create what is our glorious Canada. It was, of course, mostly lies, but what is even worse is that at the same time, First Nations children were still being subjected to the cruelties of residential schools. While I was being told that Canada is unique in this world because of its multiculturalism, Indigenous culture and identity were being systematically erased.

All of this happened in my lifetime, in my country. Unmarked graves could very well have been dug while I was a child in Toronto, blissfully living the multicultural dream. And I was taught to forget.

The first time I saw a mass grave was in the spring of 2003. I was in Baghdad, not long after the fall of Saddam Hussein’s regime. The city was still smoldering from the devastation of America’s Shock and Awe campaign and the convulsion of retributive violence that followed. Admittedly, there was something poetic about the looting and the rioting: the people of Iraq were ransacking Saddam’s palaces and the countless villas belonging to his senior officials—bought with the country’s stolen oil wealth—in a burst of celebratory anarchism. Baghdad’s streets were buzzing with joy and cathartic outbursts of destruction. Statues of the dictator were being torn down; murals of his murderous sons were being graffitied over or left pock-marked by automatic gunfire.

Meanwhile, a quieter but more heart-wrenching ritual was playing out beyond the din of Baghdad’s dancing streets. Some 35 km east of the Iraqi capital, mothers were gathering daily on a patch of dusty ground in Abu Ghraib prison. Fathers and brothers were carefully picking through the earth, sometimes with their bare hands, uncovering the putrid remains of young men who had been executed in the fading hours of Baathist regime rule. These were the final executions the Baathists would carry out in their long and bloody history of executions, their victims hurriedly dumped in a shallow grave literally on the doorstep of the prison’s execution chamber, even as U.S. bombers were beginning their sorties overhead.

I met one distraught mother who told me her son had disappeared five years earlier. He went to work one morning, she said, and never came home. Since then, she had recurring dreams in which her son would appear to reassure her that he was in a better place. It had comforted her during the years he was missing, and while Saddam was still in power: searching for his remains at that time might have placed the rest of her family in danger. So instead, she wrapped herself in the belief that her son had made it into heaven, despite his body never receiving the proper Islamic funeral rites.

Watching this woman struggle with her grief while her husband clawed deeper into the earth reminded me of a passage from Michael Ondaaje’s novel, Anil’s Ghost, about a forensic pathologist investigating war crimes during Sri Lanka’s civil war:

“There was always a fear, double-edged, that it was their son in the pit, or that it was not their son—which meant there would be further searching. If it became clear that the body was a stranger, then, after weeks of waiting, the family would rise and leave. They would travel to other excavations in the western highlands. The possibility of their lost son was everywhere.”

In Iraq, in the spring of 2003, mothers everywhere were scouring the earth for the remains of their children. The woman at Abu Ghraib admitted she was only at the beginning of her journey toward some measure of peace after the horror of the Baathist regime. Her son was lost to her but she knew her journey would not end until he was found. “If we don’t find him here,” she told me, “we’ll dig up all of Iraq until we do.”

I met a carpet salesman once in Afghanistan, from a family of Sufi intellectuals, who lost his brother and father to the convulsions of political violence that preceded the Soviet invasion in 1979. Like thousands of other disappeared, their bodies were never returned and were likely buried in a mass grave somewhere in one of the valleys surrounding Kabul. Noorali in his carpet shop on Chicken Street in the city centre would sip sweet green tea and wax poetic about those days. “Graveyards are remembrance,” he told me once, “mass graves are erasure.”

That line has stuck with me as I’ve walked around other mass graves since, in Syria and Pakistan and Iraq. What’s striking is not its inherent truth but its implied failure. Mass graves are an attempt at erasure. In telling me the story of his father and brother decades later, Noorali was still resisting. The mother in Abu Ghraib, who had only begun her quest to find her son’s remains, was also resisting. In trying to erase their crimes, the diggers of mass graves had instead created a kind of permanent absence, a black hole pulling the living permanently into its orbit.

In her 2008 book, To Know Where He Lies: DNA Technology and the Search for Srebrenica’s Missing, the anthropologist Sarah E. Wagner describes how survivors of the genocide in Bosnia returned home and how the empty spaces left by the missing became permanent fixtures in the lives of the living.

“Their absence has seeped into the vernacular of the city,” Wagner writes. “Repeatedly I heard the phrase ‘nije došao‘ (He didn’t come) as an explanation of where sons, husbands, friends, and former neighbors were. Didn’t come home? Didn’t come back? Didn’t survive? I could not quite grasp the oblique reference of place implicit in this simple phrase.”

Later, she realizes that what was being alluded to was not a physical place but a journey, a passage from darkness into the light, from the horrors of the war back to peace. The missing were not merely lost to the world, they were lost to the process of return, to the journey to healing. “They did not come”, and in their absence that journey would remain incomplete.

Death has its own logic and the rituals associated with it reflect how intimately death is woven into the fabric of our lives. My wife is fascinated by the relationship between the living and the dead. The bookshelf in our home office is peppered with some rather morbid titles, like Zakes Mda’s Ways of Dying and Thomas W. Laqueur’s The Work of the Dead: A Cultural History of Mortal Remains. As a cultural anthropologist specializing in Afghanistan, she recently became interested in the transfer of human remains and how Afghans deal with missing loved ones—the war dead, refugees who have died in a distant land. From her point of view, the phrase ‘He didn’t come’ is an expression of a disconnect, of a severing of the living world and the spirit world. In the absence of the body there can be no funeral rites; and in the absence of funeral rites, the dead are lost to the living.

As a German, and successor to the national shame of the Holocaust, my wife has a visceral relationship with missing bodies and what it means to the survivors of mass erasure. The German experience of the Holocaust remains a kind of living memory; there is no escaping it, even three generations later. Germans are taught from a young age about what their ancestors attempted. There is no glossing over of facts, and the horror of that shared history is reinforced year after year during a person’s education.

As a result, the national shame of the Holocaust has been internalized by Germans. Some, of course, resist, arguing it is better for society to “move on”. My wife disagrees. The repeated exposure to the Holocaust has helped her develop a nuanced understanding of what Germans did. “We have to understand these atrocities not as freak accidents of history, but as potentialities that can happen again,” she says. “Only then can we take responsibility for the past to work against tendencies in our society that ostracize others and make such atrocities possible.”

The crimes we are willing to commit in the name of national destiny beget our national shame. We need to learn from the Germans and turn our faces to the horrors committed by our ancestors. We must do as the Germans do: relentlessly teach our own children about that history, to teach them that national shame is not something to bury away and forget. It is the only path to our redemption.