Coronavirus lockdown: Why we can't release the brakes

Timothy Sly: The entire population is still susceptible, and the virus has not gone away. It's lurking, waiting for the opportunity to infect innocent Canadians as they push open the gate and rush out toward spring barbecues. 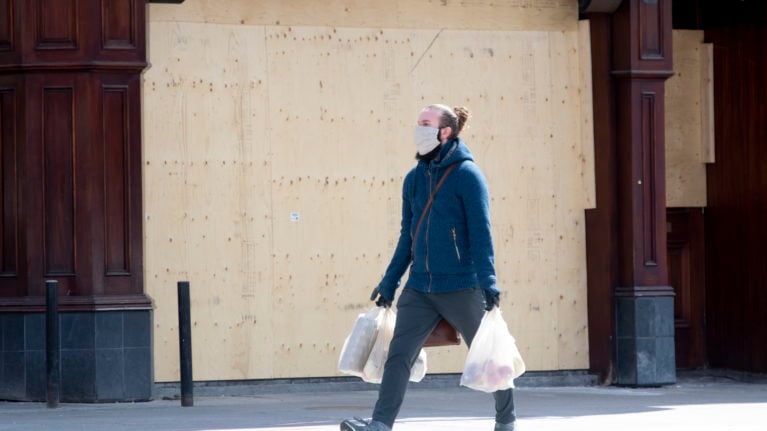 How much longer before we can get back to normal life? This is the most frequent question I’ve heard.

Let’s be very clear: without social distancing, the only guaranteed way to end a pandemic is to have enough people develop immunity. It doesn’t have to be 100 per cent of the population, but 40 to 60 per cent of the population. They would need to have been infected, survive, recover, and produce antibodies to see the curve permanently flatten and decline. Alternatively, the same result can be achieved rapidly and safely by the use of an effective vaccine, but don’t hold your breath for that. Vaccines are complex, and require both effectiveness testing and safety assessments.

But wasn’t “curve flattening” what the social distancing and merciless suppression of just about every aspect of a vibrant community’s normal characteristics was supposed to achieve? Yes, but even when it has been somewhat effective, it’s just a temporary solution, aimed at reducing the height of the great wave heading toward us such that hospitals might be saved from inundation and collapse.

All of that distancing, hand hygiene, and mask wearing remain valid ways to reduce the opportunities for transmission, and the result is largely as expected—a measureable reduction in daily case counts and deaths, and a flattened epidemic curve. Hospitals have not exceeded their capacity, although long-term care homes have suffered tragic losses because they were structurally and procedurally unable to reduce transmission.

So now what? If we continue pressing firmly on the social brakes, the more likely it is that the curve stops climbing and starts to decline. Press really hard and we could even halt the new cases and deaths. Indeed, it is possible: China brought new cases to zero for a brief time after 82,000 cases had been reported. In Canada, even if we take the most extreme estimate of infections, the recovered cases constitute only about 0.3 per cent of the population, nowhere near 40 to 60 per cent. Virtually the entire population is still susceptible, and the virus has not gone away. It’s lurking, waiting for the opportunity to infect innocent Canadians as they push open the gate and rush out toward group hugs and spring barbecues. Time to set a reminder to check on the mysterious sudden increase in case reports due the following week.

We should certainly congratulate the effort we’ve put in so far; we have indeed reduced the number of infected people. Fewer infections mean fewer hospitalizations, fewer demands on hospital facilities, equipment and staff, and fewer deaths over that interval. But the key concept is that it’s a temporary fix. Release the brakes, even a bit, and we start rolling down the hill again. Why? Because there is still a lot of hill to roll down (the large portion of the population who are still susceptible).

MORE: The history of our cultural resistance against masks

This is why public health people are so nervous about easing the lockdown.

This week, the World Health Organization issued a helpful six-point checklist of items that should firmly be in place before any country, state or province takes the bold move to let at least some of their denizens out into the spring air. Increased monitoring, screening and surveillance are on the list, which prompts us to ask why temperature-screening has largely been ignored at airports in Canada. We know that temperature checks are unreliable, and repeated studies show that at least half of virus-positive people will not be detected by the scanners, but is that any reason to let the other half pass undetected, especially when tracking a truly stealth virus?

Testing for the virus was also high on the list, especially now that we have solid evidence that at least 40 to 60 per cent of virus-positive individuals are symptom-free at the time of testing, with some surveys raising that to 75 per cent. Containing the spread of a highly transmissible virus that appears at least half the time in people who appear and feel healthy obviously requires a lot of virus testing. Without it we are groping around in the dark.

Alberta leads the provinces in tests per 100,000 people. Ontario, was lowest on the list, admittedly increasing from 1,500 a day last month to some 9,000 a day in April. By comparison, Germany managed to complete more than a million virus tests in one week. Clearly, finding virus-positive people will enable them to be removed from their work, and placed in more supervised quarantine for the benefit of everyone. Up to now, even essential workers carried on unless they showed symptoms, but it seems we’ve been missing half the people with coronavirus in their respiratory system, simply because testing was not in place.

Particular emphasis was made by the WHO on additional safeguards to be in place if and when the authorities relax the lockdown. Some of that already exists: plexiglass shields, masks, supermarkets monitoring the temperature of customers, curbside delivery, food delivery, hand-washing on construction sites, and so on. And more such protection will depend upon which selected workers are allowed to return to their workplace in a cautious, phased program.

Antibody testing will add another useful categorization. People found with antibodies in their system, whether they recall being ill or not, will be extremely valuable. They’ll be almost invincible. At the other end of the scale, the vulnerable groups—those over 65, those with diabetes, those with chronic obstructive pulmonary disease, the obese and immune suppressed—will need to remain in some form of self-confinement if they do not produce antibodies. They are still susceptible, vulnerable to the virus, and at high risk until such time as a vaccine is available.

And finally, will a second “wave” appear? It’s almost guaranteed and expected until more than half the population has become immune. For Canadian provinces beginning a gradual relaxation and cautious return to work, there is no way to avoid some increase in cases. Whether that will comprise a deadly surge or just a steady stream of cases that don’t swamp the hospitals, will depend on the care, forethought and preparation with which the release is implemented, and the compliance by the public.

If it’s clumsy and too hasty, and sets off another sharp increase of illness, imagine having to persuade people to go back down to their fetid grottos again for another six weeks of despair.