"The protections and measures now being rolled out so swiftly could have been in place long ago; this would have inoculated more people against the worst potential outcomes." 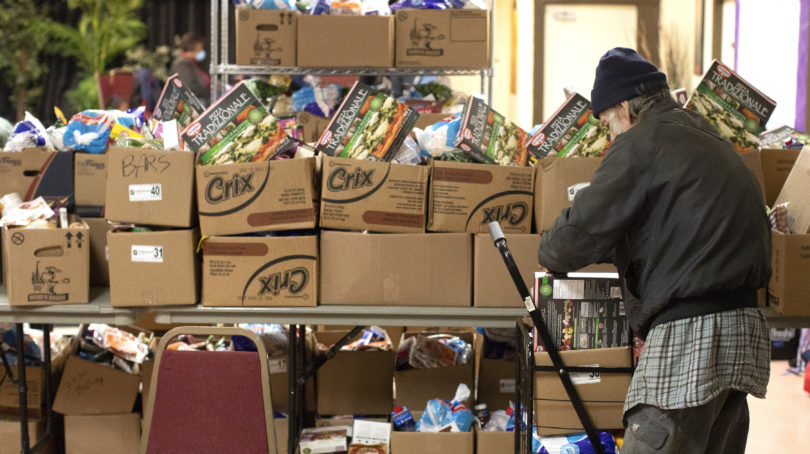 A recipient stacks his provisions in a cart at the Grant African Methodist Episcopal Church's Food Bank in Toronto on Friday March 20, 2020. THE CANADIAN PRESS/Chris Young

Over the weekend, Galen Weston, CEO of Loblaw Companies Limited, the largest food retail and pharmacy chain in the country, announced his company would temporarily raise the wages of its employees by an estimated 15 per cent during the COVID-19 pandemic. That’s an extra two dollars an hour for the staff on the frontlines who are exposing themselves, and by extension their families, to hundreds of strangers every shift, in order to do the vital work of keeping the rest of us fed and provided with our necessary medicines. (Other grocery businesses, like Sobeys and Metro, are similarly topping up wages in the short term.) And as more retail and food service businesses close, these grocery stores and pharmacies are increasingly the only places to which we can venture out of our protective cones of self-isolation. A significant factor driving this corporate benevolence, of course, is that Loblaw Companies and other grocery chains now have what amounts to a government-mandated monopoly and stand to make a fortune during this crisis. The employees placing themselves at risk to keep these stores running deserve this raise and more.

All across the country, COVID-19 has exposed both the best and worst in people. For every toilet-paper hoarder and hand-sanitizer-price gouger, there have been many more heroes to emerge. Thousands of retired nurses and other health care workers leapt back into service. Volunteers stepped up to deliver meals to neighbours and to provide support to anxious kids through distress lines. And millions are complying with social distancing protocol and sacrificing long-planned trips and get-togethers with friends, and postponing weddings, book launches and other events in order to slow the spread of the coronavirus.

RELATED: The “caremongers” getting food and essentials to the country’s most vulnerable

The pandemic has also revealed how quickly governments and corporations can act, how readily they can find money, and how easily they can overturn longstanding policies when they have the will to do so. Ottawa announced a massive economic response plan that includes a new $305-million fund for Indigenous communities, $157.5 million to support those who are homeless and $50 million in extra money for women’s shelters and sexual assault centres; a six-month, interest-free freeze in student loan repayments; the waiving of the one-week waiting period for employment insurance benefits and the extension of benefits to some people who are self-employed; and more access to credit for some small businesses. Ontario, British Columbia and other jurisdictions have placed a temporary moratorium on evictions. Canada’s big banks have said they will provide financial relief in the form of mortgage and other credit payment deferrals (although the details remain cloudy). Internet service providers are suspending data caps and waiving roaming fees.

These actions are needed and much, much more will be necessary in the months to come, as more become sick, the economy continues to falter, savings dry up and businesses go under, and more people become more desperate. But while we wait for the worst to hit, the rapid response from governments and corporations should make us all pause and wonder why, if they always had the power to do what they’ve done, haven’t they done so already?

For some Canadians, after all, this is a scary but manageable short-term emergency. For the most vulnerable and marginalized people, however, each day was already lived in a state of emergency or on the brink of one. And every aspect of the coronavirus pandemic and the attendant economic fallout further heightens Canada’s social and economic inequalities. The lack of employment protection and health care benefits for service industry and gig economy workers is a disaster for those now laid off from their jobs or forced to work at a risk to their own safety. The undrinkable water in dozens of Indigenous communities makes the recommended hand-washing protocol a cruel farce, and the limited or non-existent access to medical care on remote reserves has led some First Nations to shut their borders altogether to protect themselves. Homeless people cannot self-isolate and many of the spaces they use for shelter and safety, like public libraries and community centres, have been shut down. Those who cannot afford internet in their homes, or who live in areas that lack reliable service, are being denied access to critical information and services, and, as home-schooling programs begin, their children will be cut off from education opportunities.

It didn’t have to be this dire. The protections and measures now being rolled out so swiftly could have been in place long ago; this would have inoculated more people against the worst potential outcomes. All the above inequalities and injustices existed before the pandemic, as did all the mechanisms to alleviate them. But for so long the message has been that solutions—universal daycare, the expansion of employment insurance, access to clean water in every community, a living wage and decent work conditions and affordable housing—are too expensive, or unwieldy, or will take just a little longer, or are entirely impossible. Or else we’ve been told that people need to be more self-reliant and shouldn’t expect handouts, and that shareholders matter more than workers.

RELATED: A plea to philanthropists—double the value of your grants to local non-profits

Take Loblaw Companies. Just two years ago, its board of directors recommended that its shareholders reject a proposal to research and consider providing a living wage—that’s an hourly rate, determined annually, by assessing a region’s typical living expenses, such as housing, food, transit and child care—to all its employees. The company said that proposed minimum wage increases in Alberta and Ontario in 2017 were projected to increase their labour expenses by $190 million, according to BNN Bloonberg. But now that the company has raised its wages to recognize the value of its workforce, why not keep them at the higher rate?

Or consider Ontario Premier Doug Ford, who a few months back planned massive cuts to the province’s already lean health care system that rivalled the austerity years of the Mike Harris government. Now Ford’s government has paused its proposed cuts and is instead directing more funding to the same public health system it only recently complained was inefficient and wasteful. Given how crucial a high functioning public health system will be to our survival, shouldn’t the funding be permanently increased?

In a matter of weeks, the pandemic has shown that every single one of us is vulnerable to having the world crash down around us. And suddenly, the impossible is possible. Turns out, it just depended on what corporations and governments deem to be an emergency—and perhaps, more importantly, who they deem to matter in one. “We are all in this together,” as signs cropping in the windows of darkened stores and restaurants remind us. But does our sense of togetherness extend to those who were already struggling with other calamities long before the virus began to spread?

As we hunker down in our homes, frightened and disoriented by the indefinite loss of our schools, coffee shops, playgrounds and bars, of our livelihoods and our sense of security, and grieving for the more than 15,000 dead from COVID-19, it’s important to remember that what many of us have suddenly lost, many others never had in the first place. And if there is anything to be learned from this terrifying pandemic, it’s that it’s simply not true that policies can’t change or that money can’t be found, or that suffering and inequality are inevitable. And now that we know, we should be demanding more accountability from those with power. One recent example: When Calgary Sports and Entertainment, which owns the Calgary Flames, announced it would not pay event and venue staff affected by the shutdown of the Saddledome (which was partially paid for by public funds), it led to an immediate public outcry and threats of future boycotts (#shametheflames trended on Twitter). Soon after, CSEC reversed its stance and created a bridge support program for its employees.

We need more actions like this. If it’s possible to be more flexible with student loan payments and utility bills because of the coronavirus, then why not also when people are suffering from other emergencies, like unexpected unemployment? If a guaranteed basic income seems like a smart fix now, why couldn’t a similar program become part of a permanent solution to the growing precariousness of employment in the era of freelance jobs and patched-together gig economy work? If moderate social distancing becomes an enduring feature of our lives and our reliance on technology grows, shouldn’t access to the internet be considered an essential public utility and be made available for free by service providers? And on the list goes.

When the worst of this crisis is over, many of us, I suspect, will be inspired to continue to live differently—waste less food, walk more often, take fewer flights, cherish our relationships more deeply, be kinder and more generous to strangers. None of us know yet what “over” will look like, and most certainly “over” won’t look the same to all of us. But we do know that we don’t have to return to business as usual. We can begin to shape something better.

Rachel Giese is the editorial director of Xtra Magazine and the author of the book Boys: What it Means to Become a Man.