Timothy Sly: If the virus is allowed to enter a population and circulate, some people will die, while the majority will acquire immunity, finally bringing the pandemic to a halt 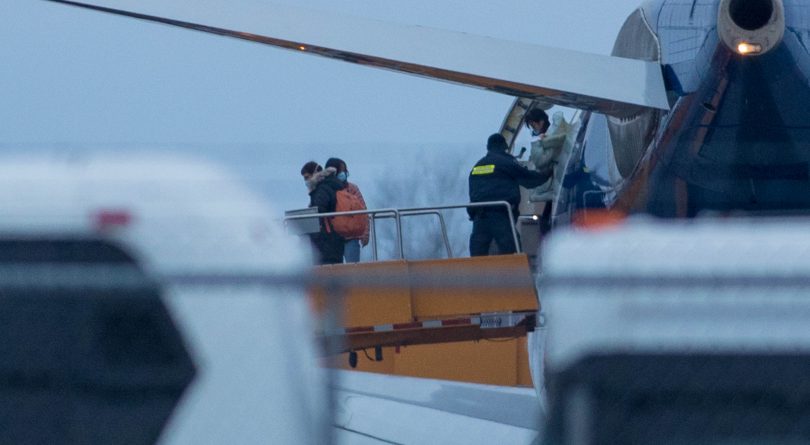 Passengers step off a plane carrying Canadians back from the Wuhan province in China, after it arrived at Canadian Forces Base Trenton in Trenton, Ont., on Feb. 11, 2020. (Lars Hagberg/CP)

At the time of writing, about eight weeks into the epidemic in China, broadcast, print, and social media are comparing the novel coronavirus, now officially named COVID-19, with severe acute respiratory syndrome (SARS), seasonal influenza, and the 1918 pandemic influenza. Inevitably, a few conspiracy pilgrims have already claimed it’s a hoax, or caused by pollution, or even a release of a biological warfare agent. Critics point out that seasonal influenza contributes more than 3,000 deaths annually in Canada alone. “So,” they ask, “why the hype?”

A more appropriate question at this stage is: What can we realistically expect?

Epidemiologists use three specific measurements to estimate the severity and possible extent of an epidemic: incubation period, case fatality rate, and the basic reproductive number.

Last week, Jantien Backer and colleagues published in the journal Eurosurveillance, the most detailed estimate yet of the incubation period (IP) of COVID-19, which should inform quarantine protocols, whether on cruise ships, hospitals, or at home. The researchers studied 88 people who had been confirmed positive for the COVID-19 virus, and found that the average incubation period was 6.4 days, with the range from 2 to 11 days. COVID-19 appears to have a slightly shorter incubation period than SARS, while being very similar to the IP for MERS.

As of Tuesday, the Chinese government said that a total of 1,113 deaths have been recorded from the epidemic, out of a total of 44,653 confirmed cases. If these figures actually represented the entire case load, then the case-fatality rate has reached 2.5 per cent, the same risk of death for an infected person as during the 1918 influenza pandemic, otherwise known as the “Spanish flu.”

Before we jump to the dreaded conclusion that COVID-19 could be that devastating, there are doubts that the numbers of cases reported daily by China are accurate. The sheer task of monitoring tens of millions of quarantined people and accurately recording thousands of cases and associated deaths daily would be very difficult—if not impossible. The daily ratios appear strangely consistent, as if they were being compiled according to a formula. Further, the cases are described as “confirmed” which excludes the non-confirmed, mild, barely symptomatic and the unreported cases. This could easily be many times the “confirmed” total. If so, the case-fatality rate would drop dramatically.

MORE: ‘It felt like the end of the world’: From Wuhan to Canada in coronavirus quarantine

Fortunately, we have close monitoring of two deaths among 518 cases occurring outside of China, allowing an independent estimate of less than 0.4 per cent. If this rate is valid it could be argued that there are six-to-seven unconfirmed cases for each confirmed one.

The basic reproductive number (R0), is the expected number of secondary cases due to each primary case. The R0 of the 1918-1919 pandemic-causing Spanish flu is estimated to have ranged from 1.4-2.8, with a likely average of 2.  More than 10 estimates for the COVID-19 have been calculated in the last three weeks, ranging from 1.7 and 3.3.

So, what can we realistically expect? When a virus is poorly adapted to humans, it seems to run out of steam after a while, and the transmission gradually ceases as the R0 becomes less than one. The vigorous spread of this virus during the last eight weeks suggests that this dynamic is unlikely.

When a population has previously encountered a virus, and has acquired some immunity to it (or an antimicrobial or vaccine had been introduced), the transmission naturally ceases. COVID-19, however, is a virus new to human populations, meaning that there is no natural immunity, and vaccines are unlikely to be developed, tested, and produced for another six-to-12 months. Global distribution will be even longer. Existing antimicrobials that have been effective against HIV are being considered, but are by no means guaranteed to be effective, and need to undergo testing.

The worst-case scenario is that the virus continues its spread until a sizeable proportion of the population has been infected.  Some will die, while the majority will survive with a newly-acquired immunity, and that will finally bring the pandemic to a halt. Once established in an area the virus will continue to spread unimpeded through the population. We can assume that for every one-million population, at least a third (330,000) will become infected initially. And if the case-fatality rate really is two per cent, 6,500 of these—principally the elderly and those with existing chronic conditions—will die. This will be reported at the end of the year as a “COVID19-specific mortality rate” of 0.66 per cent. The 323,400 who survive the infection may become immune to the coronavirus, at least temporarily, and that will also help to slow any remaining spread.

The 67 per cent who were not infected (670,000) may become infected later if the virus remains in circulation, or as with SARS in 2003, the virus may disappear back into wildlife and not be reported again.

This type of epidemic spread is very likely to occur wherever this virus is allowed to enter the population and circulate. The hypothetical numbers quoted here are based on performance of pandemics over the years, and the demonstrated characteristics to date of this virus.

Countries with strong, well-resourced public health infrastructures will continue to screen cases entering the country for a while, but we have additional problems. Skin-temperature screening at airports seems to be an intuitive barrier for the prevention of infected people entering a country or region, but there has always been lack of evidence that it is reliable or effective. During the SARS outbreak, 1.84 million people were screened, 794 were quarantined, and no cases were confirmed.

Under generally conservative assumptions of sensitivity, Billy Quilty and Sam Clifford at the London School of Hygiene and Tropical Medicine have just published results showing that as many as 46 of 100 infected travellers will enter undetected despite temperature screening. While some cases of COVID-19 infection have been identified through airport screening in the current outbreak, estimates indicate that likely more infected travellers have not been detected by screening.

Does isolation work for cases, and quarantine for contacts?  Yes, for those who are detected or suspected, and when the numbers are small. But cases entering large overcrowded urban areas undetected would easily begin another rapid outbreak that would be out of control before it was detected. Official “confirmed” cases reported by China suggest that the epidemic is not slowing down. So far, the handful of cases that have arrived in 30 other countries have appeared in local headlines and have received the full isolation treatment.

But what happens when several hundred cases slip through undetected by border authorities, and disappear from view into overcrowded centres such as Manila, Mumbai, Mombasa, or Mexico City? Canada has no direct links with Wuhan, but many regular connections with these cities. It’s easy to predict everything will go according to plan, but mother nature always finds a way…