Coronaviruses, conspiracies and the rise of broadbanditry 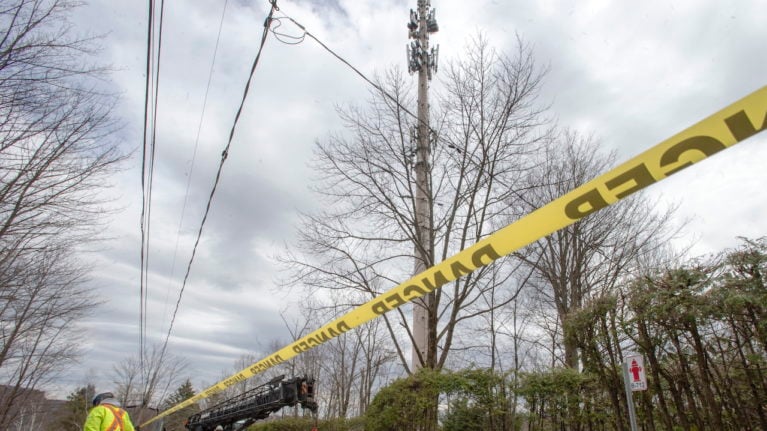 Technicians repair a cell tower after a fire that police are calling suspicious Monday May 4, 2020 in Piedmont, Que. (Ryan Remiorz/CP)

It’s possible that everything that has happened over the past few years has been leading up to the moment when, on Wednesday night, the Prime Minister of Canada put out a statement on Twitter reminding the people of our nation that a) arson is a crime and b) vandalizing cellphone towers will not prevent or cure respiratory illnesses.

Quebec provincial police have since charged a man and a woman in their 20s in connection with multiple fires set at telecommunications towers in the province in recent days. These blazes are no doubt sparked by the widespread conspiracy theory that 5G wireless is responsible for the spread of COVID-19 and/or lots of other bad things and these costly, dangerous blazes are of course what led Justin Trudeau to weigh in—but something like this has been a long time coming.

Conspiracy theories are nothing new, but on the internet they have found increasingly fertile—we all know what makes ground fertile—acres on which to spread and it is the sheer preponderance of nonsense that has made nonsense almost acceptable. Not that conspiracy theories are now taken on faith, but they are increasingly taken like faith, as something not to be questioned in polite company.

There was a time when espousing a conspiracy theory marked you. Now it can market you. The president of the United States launched his political career on the back of a conspiracy theory. He won office with the help of several more and has spread or signal-boosted many others since and, even as the most bizarre conspiracy theories leave the fringe and get entered into court records and council meeting minutes, this cultural shift has been largely, if laughingly, accepted.

The idea that some ultra-powerful and mostly invisible enemy or organization is the highly unlikely cause of events when far more mundane explanations offer themselves readily is not new, but it is new to the mainstream. We are now, most of us, two clicks, three Facebook friends or one YouTube autoplay away from an alternative world. It is a world in which much of what happens in our generally dull and un-mystical lives is being busily explained by secret and architecturally improbable tunnels, cannibal and/or pedophile fast food joints that tauntingly reveal their sinister nature in their logos, if you can just crack the code, and by, lord help me, numerology.

They love numerology. Is there a nerdier pseudo-science? Spend a few hours in certain corners of the Internet and you quickly realize conspiracy theories are sudoku for anti-Semites.

Now, with COVID-19 and the ensuing lockdown added to the mix, a whole new batch of conspiracy theories has come into play, and so to help you wade through your various social media feeds I’m going to lay some common ones out for you. I’m going to explain what the reality is and advise you on how best to handle anyone attempting to spread disinformation in, for example, the replies to that (very cute) picture of your dog that you posted on Instagram.

The conspiracy: One school of “thought” is that 5G is responsible for the spread of COVID-19 and other bad things. Another argues that COVID-19 was created to distract us from the 5G rollout, which is the bad thing. Because the Deep State hasn’t noticed that cellphones are easily distracting enough. Some insist that 5G is doing bad things because this is all a real-world test of its safety and it’s failing. Others will tell you that 5G is doing exactly what it was intended to do all along, which is make people sick, die or have to stay home so that they have lots of time to tell you how bad 5G is. There are also those who say that 5G towers are part of a CIA mind-control experiment because everyone loves the classics.

The truth: They’re cellphone towers that provide very fast Internet connections and for some reason, there are people who really hate cellphone towers. Pretty much all the strange, harmful effects now being attributed to this scary new form of cell tower were previously blamed on older cell towers, or just cellphones, back when they were the new communications technology on the block. This is recycled fear. Cellphone-loving conspiracy theorists often prefer to bestow these dark powers on WiFi instead. Also, 5G signals can not control your mind, suggesting they are less powerful than a WhatsApp chain message.

The solution: Tell your cousin, who never bothers to wish you a happy birthday, that you’re going to need some time to process this frightening new reality they have let you in on. Then, pop down to your secret underground lab and develop a new form of high-speed wireless internet, one that does have the power to control minds, but only to the extent that it can make people not want to complain about new forms of high-speed wireless internet. Also, it should work in that weird deadzone in my kitchen. If mad science isn’t your thing, block and unfriend. If they’re someone you know offline and they ask you why, you can always just say a strange urge overtook you while you were making a call on your cellphone.

The conspiracy: The gist of it seems to be that Microsoft founder and billionaire philanthropist Bill Gates unleashed the coronavirus upon the world so that he could make everyone get a “vaccine,” which is really just a “digital certificate” that is in fact a microchip implant which will enable him to gather all or our personal information. Some people will tell you Gates did not create the virus, but is just happy to take advantage of it because he really loves vaccines a lot on account of the fact that they are poisonous, don’t you know, and he is apparently a very lazy super-villain. Seriously, Alternate Conspiracy Theory Universe Bill Gates, at least get a cape or a death ray or something.

The truth: If Bill Gates really wanted to put microchips in people, all he’d have to do is put out a press release offering free microchips and wait for people to come to him. In droves. People will early-adopt anything. As for the non-microchip version of the theory, according to my research, Bill Gates has never been spotted fighting Spiderman on top of a New York City skyscraper while monologuing about his plan to destroy the human race.

The solution: Delete and unfriend. You can’t win this one. This goes for all anti-vaxxers. They are inoculated against science. Now take a moment to enjoy the irony that people who are convinced that a tech billionaire might be collecting all of their personal information and monitoring their contacts for nefarious reasons are complaining about it on Facebook.

RELATED: Rising to the occasion: Lessons from the Sourdough Quarantine

The conspiracy: Drinking, injecting, or otherwise introducing bleach into your body will kill the coronavirus, but sinister forces don’t want you to know about this simple, effective cure.

The truth: There is some debate as to whether a virus qualifies as “life,” but if the SARS-CoV2 virus is “alive” in the first place, bleach will certainly kill it, along with the rest of your body.

The conspiracy: You don’t have to go far, or be on Twitter long, to be told that China unleashed COVID-19 upon an unsuspecting world from a lab, possibly even concocting it first, designing it to be as deadly and debilitating as it is.

The truth: China is an authoritarian state in which the media is tightly controlled by the state and being the bearer of bad news can be harmful to your career and your health. So it’s likely China was not as quick to warn anyone, including itself, of the risk posed by the coronavirus as it could have been. But the general scientific consensus seems to be that the virus made the jump to humans from bats.

The solution: Take a deep breath. Type out a message asking the bearer of this shocking news why China, a country heavily reliant on exports, would intentionally damage its own economy, lose many lives and then move on to damage the economies of all their major trading partners, the very nations they might want to sell to, just as things started to pick up? Delete your question without sending it. Because they called it the “Wuhan virus,” didn’t they? And we don’t engage with those people. As always, unfriend and block.

The Virus Doesn’t Make You Sick

The conspiracy: The whole thing is a fabrication, no one is sick and no one is dead who wasn’t going to die now anyway. The emergency wards and hospitals are empty, but health-care workers just like applause and a bit of a break at the gas station sometimes.

The truth: No, the global medical community is not engaged in an elaborate, exhausting, macabre bit of improv theatre, but if you still believe that then I have swampland in Florida to sell.

The solution: Wash your hands of the conversation. Then maybe go literally wash your hands, donate to the food bank, know that your part in this matters, that you matter, and stay the hell home.