Timothy Sly: We can pay tribute to the pandemic planning of the early 2000s, without which we might not have been able to contain the cases of COVID-19 that have arrived in Canada so far. But the odds are stacked against this scenario remaining unblemished. 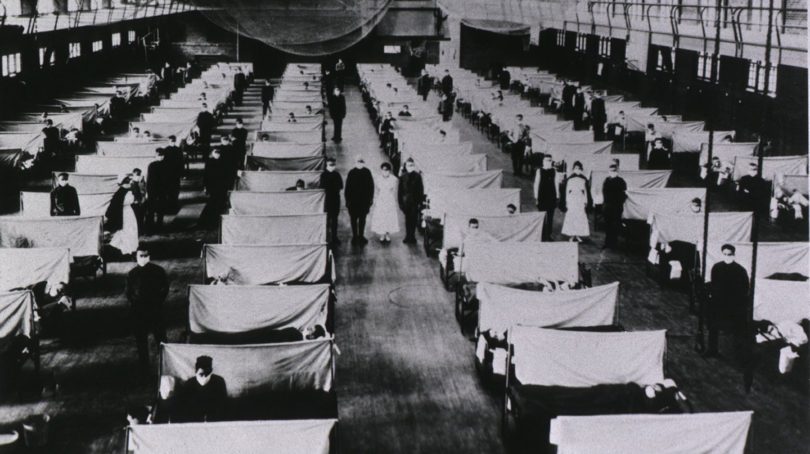 Spanish Flu Epidemic 1918-19. U.S. school gymnasium converted into an flu ward with patients' beds are separated by screens and masked health workers. An estimated 25% of the US population contracted the flu and over 500,000 died. (CP/Courtesy of Everett Collection)

We are very likely heading toward the pandemic of the century.

We have been preparing for it since 2003, when SARS revealed both our non-existent, early-warning systems and the inadequacy of our initial responses to a novel infectious disease. But the battle was fought well and when the dust settled, Canada had recorded 438 probable and suspect SARS cases, of which 44 had not survived, a 10 per cent case-fatality rate (CFR), similar to other SARS-affected countries. And like those other countries, we learned a lot, planned a lot, and in September 2004 the Public Health Agency of Canada was established.

Pandemic planning was accelerated later that same year, when another communicable disease threat emerged in Southeast Asia: a deadly avian influenza virus. Since 2003, 400 out of the approximate 800 humans who have became infected from poultry have died, a CFR of 50 per cent, similar to untreated bubonic plague, untreated cholera, and Ebola hemorrhagic fever. Yes, you read that correctly; it’s an avian influenza virus with the antigen code H5N1 otherwise known as “bird flu.” Fortunately, it still is not capable of sustained spread person-to-person.

MORE: The Coronavirus can’t be contained. Are you ready?

But the pandemic disease which killed more people in little over a year than any other in history, was the 1918 H1N1 avian influenza, sometimes erroneously called the “Spanish flu.” With a global case fatality of two to 2.5 per cent, it is estimated to have harvested at least 50 million people, with possibly many more in areas that were not keeping records. In case you are reaching for the keyboard to point out that the “Black Death,” or bubonic plague, killed many more than that, it’s not true. The plague killed a greater proportion of the world’s population at that time, but it took nearly a century to kill the same number as the 1918 flu did in about 15 months. Although the 1918 flu case-fatality rate was less than SARS, its transmission was much more effective, enabling it to reach the entire globe.

We must now face the reality that COVID-19 may have the potential to become as severe as the 1918 influenza. The CFR of around 2 per cent has appeared to increase over the last couple of weeks to about 3.5 per cent, due in all likelihood to the logistic impossibility of recording the actual case numbers on a daily basis from a population of more than a billion with anything even remotely resembling accuracy and validity.

By comparison, the cases occurring outside of China, which we can assume to have been made under greater scrutiny, were around 0.3 per cent fatal (up until Feb. 19 that is, when Iran first announced some clearly dubious and understated claims). COVID-19’s rate of spread globally shows no sign of slowing and of course it’s moving far faster than the Spanish flu in 1918, when it took an ocean liner about six days to travel from Southampton, England to New York, longer than the one-to-three-day incubation period of influenza. Today, viruses travel in comfort at 600 kilometres per hour and at 39,000 feet; they can be anywhere on the planet in 24 hours. The incubation period of COVID-19 can be two to 11 days, but usually six to seven days, and certainly long enough to be at the destination for several days before the first signs of illness are noticed.

We can certainly pay tribute to the pandemic planning of the early 2000s, without which we might not have been able to contain the few dozen cases of COVID-19 that have arrived in Canada thus far, or prevent onward transmission through the community. But the odds are stacked against this scenario remaining unblemished.

During the earliest stages of controlling the spread of any infectious pathogen, containment is key, involving finding and isolating sick individuals who meet the case definition, and quarantining their contacts. Theoretically, if this is immediate and flawless, it can be 100 per cent effective. But inevitably, we must expect “leakage” due to time delays, “hidden” cases such as asymptomatic and pre-symptomatic cases, defective case-definitions, and errors in logistics and reporting. Sooner rather than later, we will find cases with no known connection to foreign sources or indeed to any other known case.  That will imply the existence of unknown infectious cases—stepping stones, if you like—who will already have infected others. When that happens, the scenario will inevitably change from simple “containment” to “mitigation.”

We will still try to contain and isolate all cases while searching for asymptomatic or missing infectious individuals, but an uncontained spread will be a very real possibility at that stage. Mitigation at the individual, family or group level becomes top priority. Essentially, it’s a reversal of the containment principle and involves drawing a “healthy containment” circle around yourself, in a sea of possible infection, and hoping to stop the virus entering by using hygiene and distancing.