Dazed and confused, it's Britain in the age of Brexit

Leah McLaren: Nobody knows the way out, and watching a nation’s entire political elite exposed as incompetent and craven is deeply disorienting 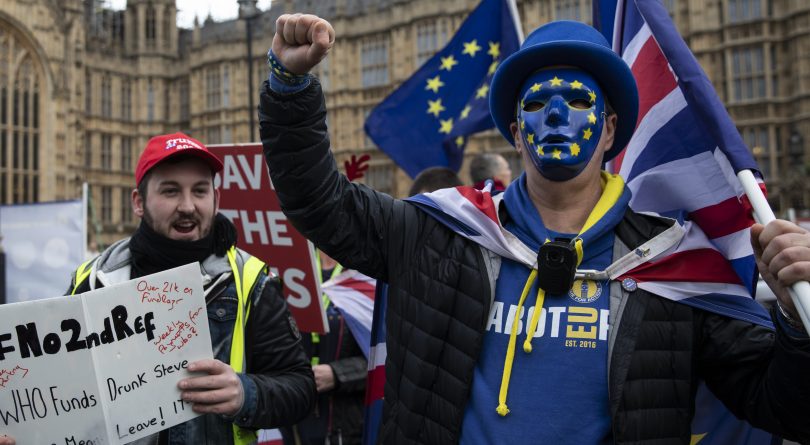 Pro and anti Brexit protesters clash outside the Houses of Parliament on Dec. 19, 2018, in London, England. (Dan Kitwood/Getty Images)

Here in my adopted home of London, U.K., watching the dramedy called Brexit play out, I am reminded, almost daily, of a BBC film called HyperNormalization, by the cult documentary maker Adam Curtis.

A hypnotic montage of found footage, the film tells the story of global public perception, distortion, pop culture, political narrative and conflict from 1975 to the present. It’s an enormous topic, almost unfathomable in scope, but one that Curtis manages, over the course of nearly-three-hours, to distill into a single terrifying theory: We live in a confusing and uncertain times. Destabilizing events keep happening that we don’t understand and can’t control. Even the people in power seem paralyzed and without a clue. How can this possibly be so?

In essence, the film says, it’s complicated. We live in a world in which the dominant cultural forces of our times—the chatter of social media and pop culture and the rise of religious fundamentalism and nationalism—have resulted in a retreat from narratives of complexity. Instead of struggling to understand the difficult, endlessly-layered narrative of what’s actually going on, most of us now cleave to the readily-available story that reflects our desires and anxieties back to us.

In other words, in an attempt to escape our own feelings of uncertainty we have become profoundly and hopelessly confused.

If there is one dominant theme to the whole mess, a sweeping, repeating theme song (complete with a song and dance number featuring Theresa May, Jean Claude-Junker and the entire European and British parliament as chorus line) it would be exactly that: Confusion: The Musical!

It’s an odd thing to see a nation known for its sanity and reasonableness thrown so collectively off-balance in so short a time. Bafflement and uncertainty have become the dominant theme of every middle-class dinner British party conversation and idle pub chat. It’s the awkward silence parents lapse into when asked by our British children to explain the news.

READ MORE: Albexit would make Brexit ‘look like a walk in the park’

Sometimes this feeling of confusion can be funny in the awkward, cathartic manner of that other British speciality, the comedy of embarrassment (see the Times of London columnist Hugo Rifkind’s brilliant viral Twitter thread on how Brexit is actually akin to a “submarine made of cheese”).

Other times, a lot of the time, it leaves people feeling helplessly enraged. I casually mentioned Brexit to my local florist the other day and she grew silent, seething as she snipped off the bottoms of my hydrangeas. Like many small business owners, a hard Brexit could theoretically destroy her business virtually overnight (the vast majority of flowers sold in Britain come from Holland, in a case of crash out tariffs could sky-rocket overnight seizing up her entire supply chain). “I can’t talk about it,” was all she said. As she handed me my flowers I noticed her hands were shaking.

It’s perhaps not so strange for regular people to feel mildly confused, even sickened, by the news, but Brexit is of a different order. No one—except possibly a handful of international trade negotiators employed by the office of Chrystia Freeland—can truly get their heads around it.

To recap, the monolith known as “Brexit” is shorthand for Britain leaving the EU—a point of policy decided in a referendum in the spring of 2016. The U.K. is now formally set to leave on March 29 of next year. What this actually looks like, or how it will happen is still, just a few months from the deadline, entirely up for debate.

Needless-to-say, this is not for lack of talking about it. Those who can bear to follow the story closely have become used to seeing barely concealed bafflement on the faces of our politicians, newscasters and pundits. No one, it’s plainly clear, has much of a clue what they’re talking about, and the ones who pretend they do are lying. There is too much uncertainty and, depending what happens from one day to the next, a seemingly infinite number of possible outcomes varying from bad (food shortages) to catastrophic (Boris Johnson as Prime Minister).

The spectre of watching a nation’s entire political elite collectively exposed as incompetent and craven is deeply disorienting and, oddly, not as fun as it sounds. Imagine getting to the third act of a play and having the entire cast, instead of just the villain, pull off their faces like masks.

If the referendum result came about, at least in part, by voters looking to stick it to the political establishment, the reality of Brexit has certainly helped to spread the general feeling of mistrust. If Britons used to wonder if their politicians were fibbing, now virtually everyone you talk to simply assumes it. This erosion of trust is, of course, how malignant fatalism seeps into an otherwise hopeful culture (see the history of every corrupt totalitarian state in the history of the planet for details).

Admittedly, it’s hard to keep up your spirits in London these days, even with spiked eggnog on tap. Every time I turn on the news there’s some politician or “thought leader” telling us they can see a way out of the mess when it’s plain that actually, they couldn’t find their way out of a wet paper bag in this particular snowstorm.

The dark irony is no longer an undertone but a method of topsy-turvy communication in itself. “Let me be absolutely clear,” has become British political speak for, “Please allow me to serve you up some steaming, self-serving horses–t.”

This state collective imbalance, coinciding with holiday drinks season, has left the whole country feeling a bit like an out-of-control drunk. As every “whirlwind news week” whips by, we go through the same cycle. First there is the sense of giddy possibility, followed by the stumbling and shouting, and finally, nausea, shame and regret.

At the moment of my writing this, all the major political factions are using the threat of a no-deal Brexit (the very thing they all purportedly want least) as a barrel over which to hold their opponents in an effort to achieve their own political ends.

A “no deal” option, in essence, would amount to an instantaneous ripping up of 40-years-worth of trade and diplomacy rules governing relations between Britain and its powerful 26-nation-state trading partner with no clear transition plan or road map in place.

The Labour leadership seems to want no-deal because it would plunge the country into economic chaos from which Jeremy Corbyn imagines it might be rescued by a brand of outdated Marxist-Leninist socialism. The hardline Brexiteers want no-deal because then they could realize their equally demented dream of rebuilding Britain as a kind of de-regulated Westernized Singapore-style tax-haven-for-billionaires. The People’s Vote lobby (which includes MPs on both sides) are hoping for a crash out as it might force the government to call a second referendum, which sounds like an interesting idea—until you remember it would introduce a whole new chapter of uncertainty.

And then, just this week (another “whirlwind” in which very little actually happened), Theresa May announced she has increased spending toward no-deal Brexit by $3.4 billion because “a responsible government must prepare for all scenarios.” The move, veiled as a precaution, was of course nothing sort of a threat. Take my deal you all hate, she is saying to parliament, or get no deal at all.

So this is the dark and confusing place we have come to: An impasse in which all sides of the political establishment, for self-serving reasons of their own, are gunning toward a future that everyone agrees would be disastrous for the very people they were elected to represent.