Dear Dad: 'Our travels led us to unusual places where we found beauty in the unexpected'

For Michael Gunther, road trips with his father, who now has Alzheimer’s disease, were never really about the destination 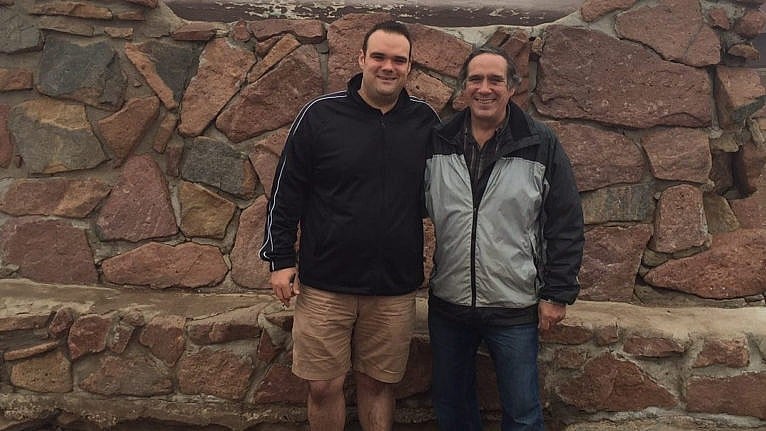 Michael with his dad, Steve, at the summit of Pike National Forest, Colorado (Courtesy of Michael Gunther)

We were about 80 km outside Flagstaff, Ariz., when I realized something was seriously wrong. We had driven pointedly off course just to, as the Eagles infamously sang, stand “on the corner in Winslow, Arizona” and were now on our way to the Grand Canyon—but you didn’t remember our destination. And the Grand Canyon is a remarkably big hole in the ground to simply slip someone’s mind.

Since I was a boy in Port Alberni, B.C., you and I would go for drives. We’d drive out to the dump to drop off trimmings from your immaculate garden, stopping for chips on the way home. We’d drive and take the ferry to Vancouver, or even the mountains beyond. Eventually, you drove me and all my belongings to Edmonton, a place I decided to make my new home.

Most often, you drove while I navigated with my dog-eared copy of the Rand McNally Road Atlas. Along the way, you shared stories about bumping into Pierre Trudeau on the ski hill and your youthful decision to travel the world on a freighter with your best friend Ken. Sometimes, I’d just get a series of “Steve-isms,” a term my younger brothers and I coined, referring to your particular breed of dad joke. Each derelict barn was a “fixer-upper,” while every small hill on the plains was noted as the “highest point in” whatever Prairie province or flyover state we were traversing.

When I finished university in 2008, we drove from Vancouver Island to California (and back) in a 1991 Cadillac you inherited from your father. We called that car “the Tank.” The following year, we repeated our adventures with a fraction of the cost and carbon footprint in your brand-new Toyota Venza. By the next year, our adventures were officially an annual tradition.

We’d usually head south—an opportunity to get away from wet Vancouver Island winters and notorious Alberta cold snaps. But most importantly, our journeys were a chance to catch up, gripe about politicians, chat about your beloved Vancouver Canucks and explore off-the-beaten-path places for which most folks wouldn’t bother leaving the interstate. We explored ghost towns, travelled oft-neglected back roads and fed wild burros from the car window. We found immeasurable beauty in obscure corners of the West Coast absent from any map.

Our adventures were also a way for me to subtly seek your advice. We discussed my future with my now-wife (“wholehearted approval”) and my itch to change careers after law school (“not my favourite idea, to be honest”). While I’d only admit to taking your thoughts under advisement, the truth is your opinions carried significant weight in my major life decisions.

On our 2016 excursion, we sat in a café in a dusty small town in New Mexico and you shared that your mind felt a bit hazy. Your impeccable sense of geography—a sixth sense that allowed you to navigate any metropolis without a map—was beginning to fail you. I took over driving duties out of an abundance of caution. You were officially diagnosed with Alzheimer’s at 61, but we all knew it was coming.

Alzheimer’s is a miserable disease, but early-onset Alzheimer’s is particularly cruel. You toiled as a self-proclaimed “paper-mill guy” for 33 years and deserved a gracious retirement. At 65, you should be enjoying time with your grandchildren, loving wife and three sons. You do not deserve the confusing struggles, the lost memories and the frightening delusions that accompany this disease.

This pandemic has been hard on you. The lack of social interaction led to a cognitive decline that is probably permanent. We hoped for one more big road trip, but that likely would be a bit too much for both of us now. Perhaps I can take you out for an afternoon drive up the coast when we can visit once again.

You should know, it was never on my bucket list to visit Hay Springs, Neb., or Wheatland, Calif. I doubt you had any pressing desire to see those places either. But, as two guys, we couldn’t just sit still and chat. We needed to keep moving—explore the countryside, burn some gas, search for some winter sunshine. It seems an enduring father-son bond was an inadvertent consequence of that.

Our travels always led us to unusual places where we found beauty and enjoyment in the unexpected. Perhaps the journey ahead will be the same. Whatever it holds, I’m certainly content being along with you for the ride.

This article appears in print in the June 2021 issue of Maclean’s magazine with the headline, “Dear Dad…” Subscribe to the monthly print magazine here.

FILED UNDER: Alzheimer's Disease Before you go Editor's Picks fatherhood