Dear mom: 'Now you have stomach cancer, and not much time left. Still, you’re not afraid of dying.'

'You told me that you’re taking this one last journey into what Shakespeare called the “undiscovered country” in his play Hamlet. Mom, you remain an inspiration to me until the end.' 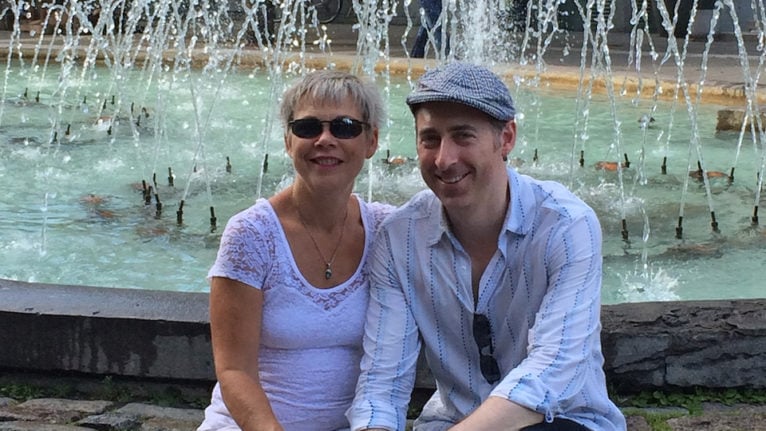 Dale and Jamie Smith in 2015. (Courtesy of Dale Smith)

Last summer, I asked you if you knew what you wanted me to be when I grew up. Your response was that you really wanted your four children to be independent. You refused to baby or coddle us. You encouraged our talents—music, art and writing in my case—and you didn’t push us into jobs that were “practical”.

In late June, after sudden weight loss and what you thought might be a hernia, you were diagnosed with stage-four stomach cancer. The doctor said you only have three-to-four months left to live. I started to reflect on your life and what you’ve left me with, and I soon realized that it wasn’t just independence—from you, mom, I learned to be fearless.

You were a black sheep in your town. You grew up in Pigeon Lake, Alta., a farming community, and met my father while working as a lifeguard in the village of Forestburg, which was several hours away. A year-and-a-half later, you married.

MORE: To a grandmother with Alzheimer’s: ‘Perhaps slowly forgetting me is good for you’

There were those from the Lake who resented the fact that you married outside the community, even though most people weren’t religious; it was just rural Alberta insularity.

In 1976, you got an education from the Northern Alberta Institute of Technology (NAIT) to become a laboratory technologist. And in 1978, you had me, a proud gay nerd amongst a family of farmers and tradespeople—plumbers, electricians and cabinet makers.

We moved five times before I was 18. Dad was in the oil patch; we were the Alberta equivalent of army brats. I never really appreciated how much courage it took to uproot your life and move so often. Each new town had its challenges—finding appropriate schools, dealing with my brother’s behavioural issues and angry neighbours. But you never let your circumstances overcome you.

MORE: Dear sister: ‘I wonder if my silence played a hand in your suffering’

You went back to school while raising four children, first for massage therapy and then to become a hairdresser. When you and dad ended your marriage, your version of a clean break was to move to China for a year to teach English. It was the furthest you’d ever travelled.

When I made my own decision to move halfway across the country to Ottawa to pursue a master’s degree in journalism, I know that I learned to pursue my dreams from you.

It was in your 50s that you really came into your own. You rediscovered your love of riding motorcycles, travelling from Edmonton to Vancouver and back on your blue Hyosung 650 Aquila. Then you met Sylvain, the lighting guy for Cirque Mondo, a travelling circus. When he got a job offer with Cavalia, another circus show featuring horses, you ran away with him.

You followed Sylvain to Laval, Que., and from there you went to Atlanta, Miami and San Diego, where you couldn’t work because you couldn’t get a visa. You enjoyed the ride and explored these new cities, but when the circus went to Seoul, Taipei and Hong Kong, you were able to join the company as a massage therapist.

I think a lot about your time in Taipei in 2015, where you witnessed TransAsia Airways Flight 235 crash into the Keelung River. The plane nearly clipped your apartment building before crashing.

You ran to the big top to tell the circus performers what had happened, before heading to the river to watch the rescue operations, unsure how many people survived.

In the email you sent to family afterward, you wrote: “Live your life fully! You never know when it is your time. And know that you matter and you are loved.” You lived your life fully, mom.

After you and Sylvain ended your relationship and you returned to Canada, you still didn’t lose your thirst for travel. You made your way to the Philippines, Japan, Australia and New Zealand. You didn’t resign to babysitting your grandchildren. You took up belly dancing and salsa—nothing slowed you down. I was in awe of your energy.

Now you have stomach cancer, and not much time left. Still, you have insisted that you’re not afraid of dying. You remain fearless. You told me that you’re taking this one last journey into what Shakespeare called the “undiscovered country” in his play Hamlet.

Mom, you remain an inspiration to me until the end.