Dear sister: 'Your life was often hard, but you made it beautiful'

Before You Go: Janine Longy thanks her sibling Marguerite Marie Jeanne for never letting family dramas destroy their love 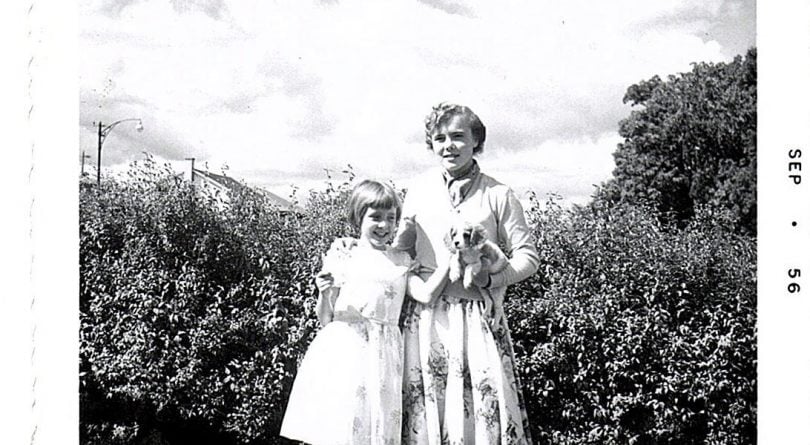 I clearly remember bumping into you on Maguire Avenue. It was 1957, a cold March afternoon in Quebec City, already dark. I was 10 and you were 17. I was on my way home from school after buying a paper bag full of blackballs at the corner store. You had on your brown coat, collar up to protect you from the wind. You were crying. You told me you were leaving home. I learned that you were pregnant and Papa had told you to get out of the house.

Fearful because of Papa’s unpredictable temper, one day I snuck out and took the bus to see you and Bill, the father of your child and soon to become your husband of more than 60 years. I have a black-and-white snapshot on my bookshelf of Bill, young and thin, in a suit, his arm around me. I’m wearing a flared skirt with removable pockets telling the day of the week.

Ours was a home that married two cultures, our French father strict and often explosive, our English mother the quiet mediator. Papa corrected our table manners by swatting us with his napkin from the head of the table. We could never wear pyjamas to breakfast. The chaos of his moods marred special occasions. I can picture the gâteau St. Honoré mother had made that he threw in the garbage on his birthday, a mush of puff pastry, dribbled chocolate and whipped cream.

READ MORE: A writer to her dying sister: ‘We tell ourselves lies to survive’

But there were splendid times, too. The whole family drinking champagne. Papa popping the cork up into the air with great ceremony to join other corks on top of the tall French buffet. Him playing the accordion with tears in his eyes. You and I swaying in the back seat on Sunday drives as Papa waltzed the car down country roads to the tune of The Blue Danube. In the winter, we would skate on our tennis court after Papa flooded it to make an ice rink. We danced in the basement to Louis Armstrong, and you twirled me until I was dizzy.

After you were banished, our parents sent our middle sister, Christine, to boarding school, not wanting her going to the same high school you had attended because of the family disgrace. That created a lifelong distance between Christine and me. With you both gone, special times were dismal.

Four years later you came back into my life. Papa had been promoted to vice-president of a large cement company, and we moved to a house bordering Lac-Saint-Louis. You had moved from Baie-Comeau and were accepted back into the family. How young you were with two small children. How beautiful. I was entering the teen years. I came to you with questions about life, boys and sex. You answered them as we washed clothes in the wringer washer at your apartment in Sainte-Anne-de-Bellevue. You taught me to iron. Even now when I iron a shirt, I think of you.

Papa’s temper became intolerable. At 17, I escaped to Carleton University and never returned home. You fled, too, but I always found you. One summer I stayed with you and your children on a farm you were renting in rural Quebec. Bill was away. What fun we had driving from farm to farm drinking coffee and exchanging gossip with the neighbouring wives. We made pies and laughed as you molded the pastry dough into naughty shapes. I confided in you about my boyfriends and my dreams. To this day, you hold my secrets.

RELATED: A sister’s letter to her big brother: ‘You teased me but secretly I adored you’

When my marriage failed, I decided to move to B.C. with my children to teach French immersion. When I visited, you would play the piano and we’d sing. Cheap red wine helped us reach the high notes. We’d play cribbage. When you weren’t looking, I would move my peg ahead, a bratty little sister.

Your life was often hard, but you made it beautiful. You knitted sweaters, made dolls, baked, created a wonderful garden and more. Your home was and is a special place for me. We promised each other we would never let the family dramas destroy our love.

Now I am 72 and you’re 79. You and Bill have five children, 11 grandchildren and three great-grandchildren. You’re in Quebec, I’m in B.C. When I visit we still sing, dance and drink red wine. The piano is gone and you have a cane. We have survived many storms. When we are happy, we phone. When we are sad, we phone. You will always be my big sister and I the little sister who looks up to you. Before you go, I want you to know how much I love and admire you. You are my very closest friend.

This article appears in print in the September 2019 issue of Maclean’s magazine with the headline, “Dear sister…” Subscribe to the monthly print magazine here.