Dear Tabatha: An advice column for sad and confused Republicans 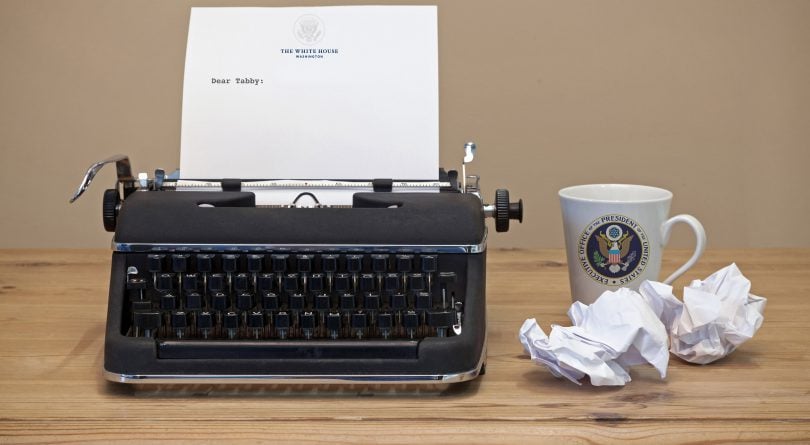 Like many writers, I work a number of side gigs. One of my longest running projects has been an advice column I pen for people in awkward and unpleasant situations entirely of their own making. Recently I’ve been hearing a lot from a group best described as “the entire Republican Party of the United States,” and since this generally dull bit of moonlighting has become suddenly more relevant to my Maclean’s readership, I have decided to reproduce some of the highlights from these supplicants here.

A trove of documents just released by the House strongly suggests that two men working indirectly for the president of the United States were at best stalking and at worst planning some sort of disreputable action against one of our own ambassadors, all as part of a scheme to damage one of the president’s potential political opponents.

The best defence anyone’s been able to come up with for this deep creep to defeat the former veep is that the person claiming to be tracking her location and monitoring when her phone and laptop were turned on was making the whole thing up because he was literally drunk all the time.

Naturally, this is not a good look for my party. How should I respond, while avoiding angry nicknaming tweets from the president, or alienating my base and while keeping, say, eight per cent of my dignity in tact?

It’s Tabatha, thanks! Right there in the title of the column, “Dear Tabatha, Not Tabby, or Tabs, Just ‘Tabatha’ With Three ‘a’s.”

Well, that certainly does sound like an awkward position to be in and I’m going to assume “doing the right thing” is off the table; in fact, that there is no table anymore. The table resigned in protest two coverups ago. I suggest you try normalizing this disturbingly menacing behaviour. Start by calling in to Hannity and suggesting that everybody stalks ambassadors, or at least everybody who isn’t a latte sipping liberal elitist from the big city who thinks they’re too good to run a freelance spying operation on a representative of the United States government.

There may be pushback on this but with some effort I’m confident you can sell it. Rustle up some interns and even some of your fellow senators, and get some ambassador watching of your own going. Cut eye holes in a newspaper and stare at Lithuanian diplomatic personnel from park benches. Have a news crew film you digging through the Japanese embassy’s trash under the cover of about 3 in the afternoon. With luck, people will accept that this is nothing to be worried about and Ambassador Following is just like Pokemon Go, only with more mysterious Ukrainian “Theys” because you “can do anything in Ukraine with money.” At the very least you might find some only just expired food!

My strategy of acting like I’m completely ignorant of major political events despite my being a sitting U.S. senator has been going pretty well, but there’s still one problem. I’ve successfully sealed my conscience and sense of duty at the bottom of a deep well covered by a heavy stone, so those aren’t bothering me anymore, but I’m finding it difficult to eat my lunch with my head buried in a large bucket of loose sand. Can you recommend a few good subterranean cranium recipes?

Signed, Senator in the Sand

I hate to be the bearer of bad news, but literally nobody who doesn’t work for CNN or the New York Times is buying it. That said, I’d suggest freezies. With some practice, you should be able to hold one end in your mouth, then, when you get hungry, bite open the packaging and suck out the frozen treat inside without opening your mouth and getting sand in it—or voting to confirm to the Supreme Court a man credibly accused of rape and demonstrating a temperament entirely unsuited to the position. This can be done without having to unearth your head and risking you being exposed to information that is vital to doing your sworn duty as a senator. Alternatively, consider a meal replacement drink in a hamster bottle.

Everyone who works for the man I work for looks like the villain in a movie who has kidnapped a small child and is about to get a whole lot more than he bargained for! I’m worried about what this means for me. Can you recommend a tailor and a good skincare regime?

Moisturize. But if ever there was a political crisis destined to end in a super-soaker shootout in a Chuck E. Cheese, it’s this one.

Best wishes, Tabatha (Alternative spelling of Tabitha. An English name derived from an Aramaic word meaning a female gazelle. cf. Hebrew: צְבִיָּה‎ Tzviya (classical ṣəḇīyāh). A biblical name from Acts of the Apostles, Acts 9:36, which in the original Greek was Ταβιθά, in which Tabitha––’gorgeous’ in Greek––is raised from the dead by Saint Peter.)

DO YOU THINK THIS IS SHOUTY ENOUGH!? I’M NATURALLY VERY SHOUTY BUT I’M JUST NOT SURE I CAN SHOUT LOUD ENOUGH TO DISTRACT FROM THE FACT THAT RUDY GIULIANI TOOK THE TIME TO MAKE IT CLEAR, IN WRITING, AND NOT EVEN BUTT TEXTING THIS TIME, THAT HE WAS ACTING WITH TRUMP’S “KNOWLEDGE AND CONSENT” WHEN HE TRIED TO PRESSURE THE PRESIDENT OF UKRAINE INTO PUTTING HIS THUMB ON THE SCALE OF THE UPCOMING U.S. ELECTION. SHOULD I TEAR UP A LITTLE BIT? WOULD THAT DO IT?

Signed, Belting it Out in the Beltway

THERE IS NO ‘Y’ IN MY FIRST NAME! You are indeed very shouty, but in this case I agree a single manly tear might go a long way towards keeping talking heads from discussing the actual substance of the case. Also, consider throwing in lots of deep breaths and long dramatic pauses. Do it as if you just need time to process the grave injustice that is President Trump being cruelly denied the electoral interference he so depends upon.

I. Like. Beer. I like BEER! I still like BEER. Just not in a drinking-too-much way. I like beeeeeeeeeer, in a very healthy way that should never lead to, and can in fact protect me from, facing any consequences for my actions.

We’ve been over this. Don’t you have a Supreme Court to be damaging the reputation of or something?

Lately I’ve been worried that I am squandering my reputation and doing irreparable damage to my legacy, all for a man whose only real love and passion seems to be standing in front of crowds, waving his unusually short fingers and yelling incoherently about light bulbs and toilets. Is there anything you can say to reassure me I’m not losing everything for the world’s worst shop teacher?

Signed, Flushing It Away