John Robinson was a normal teenager with bold ideas on pot legalization. But he was from a troubled home, got hooked and eventually came to a breaking point. 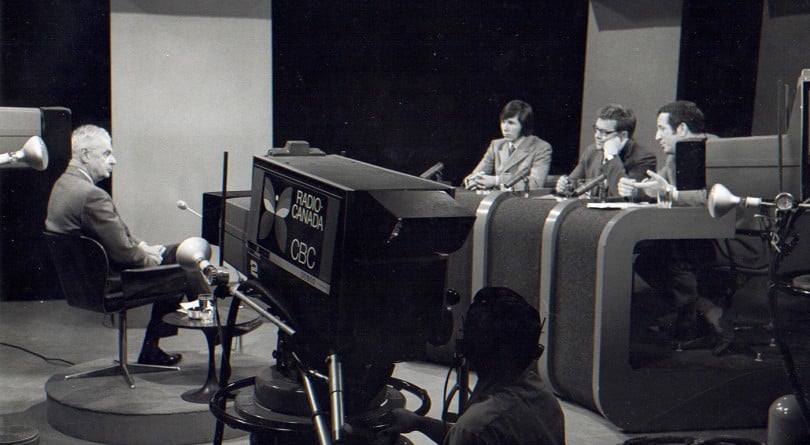 John Robinson is a Carleton school of journalism graduate who was a writer and editor at the Toronto Star for 31 years. He is currently a freelance writer.

Nearly 50 years ago, with the country in the grip of reefer madness and a royal commission recommending the decriminalization of marijuana, a CBC current affairs show came calling. It was looking for the voice of a generation to appear on a panel. Not only was I a high school student and enthusiastic consumer of pot, but I had a hand in writing one of the 365 briefs submitted to that royal commission.

And so, on June 19, 1970, I landed in Ottawa and was picked up at the airport by a CBC employee, a friendly older man with a dad’s hat and glasses. He delivered me to a downtown hotel for the night, chauffeured me to the studio the next morning, and handed me a tongue-loosening shot of whisky 20 minutes before they turned the cameras on. Then I proceeded to defend weed to none other than former Conservative prime minister John Diefenbaker.

Now, almost a half-century later, I look back on my youthful championing of pot with both understanding and chagrin. As a teenager, I didn’t have insight into why I was so drawn to marijuana. Thankfully, that reckoning finally came when I was in my mid-30s.

Marijuana addiction is real, and teenage users are most at risk

My 1970 journey to Ottawa had begun a year earlier, heading into the summer of ’69. In the Toronto suburb of Mississauga, local newspapers were running stories about 16- and 17-year-olds being charged with possession of marijuana and facing criminal records. Many of the kids were not “hippies,” and some had prominent family names.

This crackdown was part of a national trend. In 1967, Canada racked up 431 convictions for cannabis possession. In 1971, convictions jumped to 8,389. Parents who had lived through a world war were freaking out about their boomer kids using drugs. The ’60s breakdown in family structure and the battle over lifestyles were in full swing in 1969—when an ounce of Acapulco Gold sold for $28 in Toronto.

The growing sense of crisis triggered an emergency meeting in Mississauga, which begat the Peel County Task Force on Drugs. My friend Greg Sumner and I were two of the seven student representatives. We were asked to prepare and present a brief to the Le Dain Commission into the Non-Medical Use of Drugs when it visited the Greater Toronto Area during its swing across the country. I was loaded for bear.

I had thought the task force would be a place where teens and adults would break the code of silence about what was really going on. Incredibly, not once in six months of meetings had a student rep revealed that they smoked pot! I was about to change that. But first I would have to convince my report collaborator.

RELATED: Everything you need to know about marijuana legalization

Sumner and I had taken on the role of researchers, which meant anything from scouting the local drug scene to sparking up a test joint of the latest Mexican marijuana or pipe of Lebanese hash while we tooled around in his old Volvo. Crucially, he gave me feedback on what I was writing.

But Greg grew uneasy when he read my first passage about smoking dope: “My friends…pulled out a dime ($10 worth) of grass. We started blowing joints. They showed me how to get a great deal of smoke into my lungs at one time (super-toke). It was my first time and I didn’t get high. My buddies were spaced.”

I can still see my collaborator kicking leaves in my family’s driveway, looking down, head wagging, repeating, “I don’t know Johnny, I don’t know.”

In the end, I prevailed. But when the 40-page brief to the Le Dain Commission was published in March 1970, my friend blacked out every passage about smoking weed before handing the report to his parents.

The Peel drug task force presented its brief in a Hamilton auditorium on May 14, 1970. A Hamilton Spectator reporter quoted from my presentation in his story the next day, which included this statement: “A good portion of my life has been spent living up to the self-image I have of myself, or creating an immediate environment that is honest and true to that self-image. I can’t knock pot because it does not impede that image or that environment.”

The reporter then noted: “The speaker was a Clarkson high school student, well-dressed, well-groomed, articulate. He was telling a royal commission what he thinks about marijuana and why he uses it occasionally.”

So I was normal, not a drugged-out, dirty hippie? Yet here I was saying weed was OK! This was real news to parents in those days.

A CBC producer called later to ask if I would appear on the national news show. Diefenbaker became the unlikely interviewee on the subject of drug use when Liberal health minister John Munro bailed a few hours before the show was to be taped.

“There is a social revolution at hand,” I said on the show. “I see grass…dope as being part of that revolution. It’s a badge that some people are wearing now that calls for open-mindedness, that calls for a new attitude.”

Dief was supportive. “I like to see young people challenging everything in the past. They may be idealistic…but they represent your thinking and many that are associated with you.”

When asked whether decriminalizing marijuana was a good idea, he was prescient in his reply: “Without the necessary medical research there can be no final determination.”

That’s one of the biggest issues around legalized marijuana in Canada today—its impact on mental health, especially in young people, and how and why it physically affects people differently, especially in tasks like driving.

The Le Dain Commission published its final report in 1973. Pierre Trudeau’s government rejected the central recommendation that marijuana be decriminalized, and it sat on a shelf until his son, Justin, saw it as an idea whose time had come, 45 years later.

RELATED: 13 things you’ve probably wondered about marijuana but were too afraid to ask

At the time, health minister Munro predicted that the use of all drugs was “going to be increasingly resisted in future by the young people themselves.” That prediction did not prove true for me. Not even close.

In my brief to the commission, I wrote: “A very minute portion of my life has been spent stoned. I have witnessed a good many sunsets with a straight mind.” How I wish that the part about a “minute portion of my life” had turned out to be true. And that the “well-groomed, articulate” young man giving voice to Canadian youth in that Ottawa TV studio was not a disguise that hid the secret me.

At a drop-in centre for troubled youth where I had volunteered in the early days of the task force, there was a little guy with thick glasses who everyone knew to be a speed merchant. I ran into him one night at a plaza near my house, went behind the building, and had him tie an elastic band around my right arm, plunge a needle into my mainline and pump me full of speed. It was my first time and it felt good!

I did inexplicable things like this because I didn’t know how to take care of myself. There were no boundaries I wouldn’t cross, no stop signs when people wanted to do things to me.

That’s what happens when you grow up in an alcoholic home. In our house, my three siblings and I would step over our mother passed out drunk like she wasn’t there. We were too ashamed to invite friends over, weighed down by our family secret, which felt like a body buried in the basement.

We were strapped with a belt on bare legs when we were bad. Lashings from my mother’s cruel Irish tongue hurt more. I had no opportunities to offer opinions, defend my views or express feelings. So I had no self-image, and the emotional maturity of a 10-year-old. The impulsiveness behind my reckless use of drugs and the shame that caused me to hide my true self were an inheritance from my upbringing.

READ MORE: What are the mental health risks of marijuana use?

There was another damaging legacy. A child raised by an alcoholic parent learns that they are not enough. Why else would Mommy abandon them? A child can’t think the unthinkable, that “there is something wrong with Mommy.” I grew up trying to prove I was enough, to catch my mother’s eye.

I injected drugs another two or three times, but the marijuana endured. After high school, I hitchhiked around Europe, lived in California, went to university, landed a job as a journalist, married at 30. I was smoking cannabis all the while.

Along the way, I realized it was no longer about enjoying a toke. It was about wanting a toke—and becoming seriously preoccupied when I didn’t get one. I smoked frequently enough that I was never really straight.

The effects of my cannabis use became more apparent once I was married. I became isolated, staying up alone at night smoking weed, almost like I was living in the home I grew up in. It made me paranoid, forgetful and disorganized, and it shifted my motivation into neutral.

Then, when I was 36, Sean was born. And a few weeks after he came home from the hospital, we were heading out and I decided to have a little “toot” before hopping in the car. Then it hit me. I looked down at Sean looking up at me and thought that if I made some kind of stoner mistake while driving, he could die.

That was it. Time to grow up, be a man, take my place at the table. I got help from late Toronto psychologist Sid Folb, an expert on addictions. And Al-Anon, where friends and families of people with addictions meet to support each other, was instrumental in my healing.

What did it mean to me, that I stopped smoking pot? Everything. I did not repeat the tragedy of my mother. If I had to live knowing I had recreated the diseased family I grew up in, the guilt would be killing.

My three children (Sean was joined by our twins when I was 37) know me. All of me. Not stoned me. Not me preoccupied with my next toke. I was able to accept that I was worthy of my incredible babies.

I have lived the past 30 years as a free person. You pay an awful price when you are not free. You can’t live in the moment. I know now that I am enough.