Democracy can't be taken for granted. Charlottesville proves that.

Opinion: The tragedy in Charlottesville is a reminder that democracy requires constant commitment—even in places like the U.S. and Canada 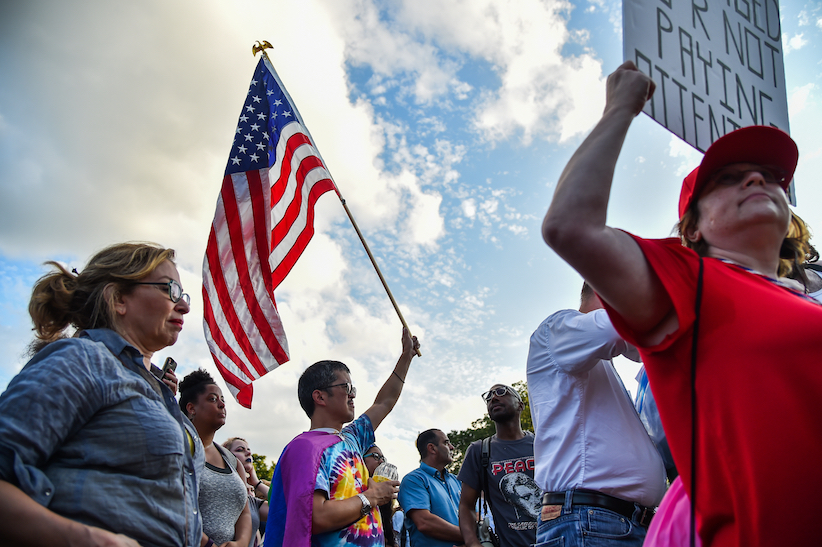 This past weekend, white supremacists and fascists marched in protest of the removal of a statue of a Confederate general. The march was met with a counter-protest that was attacked by a domestic terrorist who struck a crowd of protestors with his car, killing a young woman and injuring several others, the capstone atop two days of tension and violence.

But it’s no surprise that things turned violent very quickly. There is a widely held and misguided conceit that’s particular to our contemporary, developed world conception of democracy: that individual rights and freedoms can be protected and preserved without the constant, vigorous participation of citizens in public life, and a corresponding commitment to privileging our own needs over essential collective ends—like, say, not allowing armed white supremacists and fascists to march through a town.

In the United States—and elsewhere, too, including Canada—we have come to take democracy for granted. We think of it as “set-it-and-forget-it,” as if democracy is inherently self-renewing rather than the product of sustained work by those who live under it. Instead, the promise of democracy is a bold one—and indeed, it may be a conceited one, the idea that a large, diverse group of people who fundamentally disagree with one another can not only live together in peace and prosperity but can also self-govern. And yet its history is the story of many such attempts by groups of people to self-determine, to build solidarity and trust, and to channel would-be violence through legitimate political institutions. None of this happens by accident, and all of it happens through work. No democratic form of government is guaranteed—a fact we ought to remind ourselves of often.

There is, after all, a bug (or a feature, depending on who you ask) in liberal democratic government, the version of democracy enjoyed today in Canada, the United States, the United Kingdom, France, Australia, and other elsewhere. Our democracy is a combination of two sometimes-antagonistic ideas crammed together. Liberalism, as a political philosophy, is primarily concerned with freedom, rights, and a focus on the individual—summarized these days as “leave me alone.” Democracy is primarily concerned with collective self-rule, either directly or, as is more common these days, through representatives—summarized historically and today as “Let’s decide how to live together.” The two bits of ideas that form liberal democracy are often in tension with one another—for instance, when individual rights are limited so that some collective good can be achieved (hello, taxes). We try to strike a balance between liberalism and democracy, but far too often we let the former crowd out the latter. We tend to be great liberals and lousy democrats. So, when we’re called on to practice democratic citizenship, we either shirk our duty or fail to distinguish ourselves with anything resembling passable public engagement.

That’s troubling and dangerous. Imagine democracy as a marriage. Now, imagine if the parties in that union decided that the work of binding themselves to one another ended with their marital vows. That’s us—far too many of us, anyway. We nod to the Constitution, or the Declaration of Independence, or the Charter of Rights and Freedoms—whatever the document may be—and then we go on with our private lives, as if we owe nothing, as if the words written or implied or read into foundational texts will do the hard work of self-government for us. We take our interests as prior to and above the public good. We expect that our worldview is the undisputed expression of what is good and right and true and beautiful.

The violence in Charlottesville was the product of white supremacy rooted in a racist, colonial history, and not merely a failure of democratic citizenship. But robust citizenship is essential as a bulwark against the worst elements of a society. The marchers in Virginia were enabled by the (admittedly legitimate) presidency of Donald Trump; indeed, David Duke, a racist icon and former politician, credited Trump on the day of the march: “We are going to fulfill the promises of Donald Trump….that’s why we voted for Donald Trump because he said he’s going to take our country back.” All of this nastiness comes from somewhere.

When The Economist downgraded the United States to a flawed democracy earlier this year, the magazine noted that it was not because of Trump; rather, the drop “was caused by the same factors that led Mr. Trump to the White House: a continued erosion of trust in government and elected officials.” Declining trust was one factor in the U.S. decline; another was a lack of political engagement and participation, and a combination of democratic malaise, declining trust, the rise of a white-supremacist right wing, endemic racism, and economic inequality and anxiety now has a stranglehold on the United States. Charlottesville is a symptom of a very ill democracy, and it isn’t obvious that the body politic is healthy enough to fight off the infection.

There’s an impulse here at home to declare that none of this could happen in Canada. We are not the United States, plainly. And yet, we are not immune to democratic decline and the ensuing malady. We too have a colonial and racist history; we too suffer economic inequality and anxiety; we too take our democracy for granted far too often; we too harbour citizens—even certain leaders—who preach hatred and ignorance, and who thus enable violence.

Carl Sagan once noted that human beings are all descendants of the Big Bang—of nearly 14 billion years of cosmic coming and going. Nearer to our own time, we are also descendants of a democratic tradition that began more than two millennia ago. As a human achievement, democracy is not a miracle: it is the product of promise, work, and blood. It has been lost before and it can be lost again—perhaps permanently.

The violence and tragedy in Charlottesville should serve as a reminder that the contemporary democratic project is an ongoing endeavour that demands that we continually renew our commitment to citizenship, inclusiveness, and liberty while offering to sacrifice, participate, and cooperate, joining others in being a part of collective self-government. And for those in government, the tragedy and shame that unfolded in Charlottesville must encourage the provision of sufficient resources to allow citizens to faithfully and meaningfully engage with their democracy.

As former governor-general Adrienne Clarkson put it: “Each of us is carving a stone, erecting a column, or cutting a piece of stained glass in the construction of something much bigger than ourselves.” That is the democratic project: participation in a form of government that is ultimately much bigger than ourselves. It’s a project that preceded us, and it will—if we work hard and are fortunate—succeed us, too.