Donald Trump, a Bible, and blasphemy

Michael Coren: The U.S. president had peaceful protestors tear-gassed so he could pose at a church holding a book that roars love, peace and justice 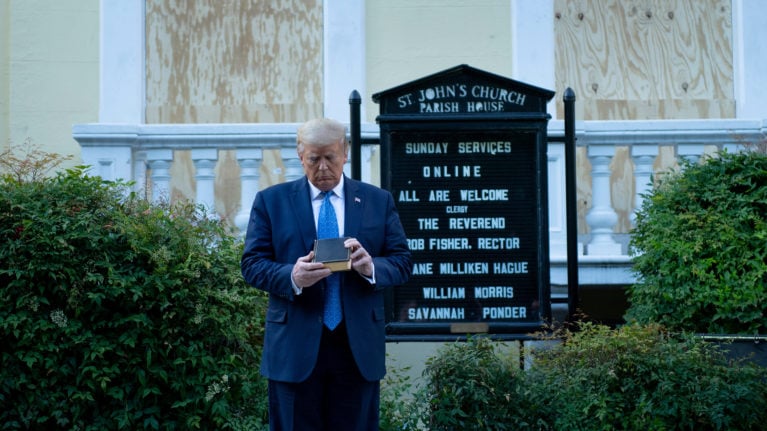 Trump holds a Bible while visiting St. John's Church across from the White House on June 1, 2020 (BRENDAN SMIALOWSKI/AFP via Getty Images)

If there is one thing we have discovered to our cost about Donald Trump it’s that he can always surprise us. Not with delight at his eloquence or empathy, or some desire for harmony and decorum, but in horror at some new presidential depth.

And as the sun set over the capital of the United States, the most powerful man in the world had the police fire rubber bullets at non-violent protestors so that he could walk from his news conference in the Rose Garden of the White House to St. John’s Episcopal Church. He stood in front of this historic church, renowned for its commitment to social justice, held a Bible and posed ostentatiously for the cameras.

Just yards away, young people who had been demonstrating against racist violence and the murder of George Floyd wept with tears produced by tear gas and by frustration. Yet Donald Trump, supremely indifferent and even mocking, held high a text that roars love, peace, and justice.

The politics behind this sacrilegious ritual are obvious. Trump is in profound political trouble on numerous levels, and he knows that unless he can activate his base he will be thrashed at the election. That base includes the 81 per cent of white evangelicals who voted for him last time round, and many other Americans who have a sense—sometimes vague, sometimes deeply ideological—that their nation is a Godly light on the hill, a geopolitical product of faith and patriotism.

It’s absurdly ironic that a country so eager to boast the separation of church and state is in fact so riddled with its inter mingling. Trump was determined to evince strength against protest and to link this to devotion to Jesus. As risible as it all may seem, it may well have succeeded with many of his followers.

But on a purely faithful and religious level it’s just as bad and perhaps even worse. The Rt. Rev. Mariann Budde, Bishop of the Episcopal Diocese of Washington that includes St. John’s, put it well when she said that neither she nor the priest at the church had been consulted, and that she was “outraged that they would be clearing with tear gas so they could use one of our churches as a prop. Holding a bible, one that declares that God is love and when everything he has said and done is to enflame violence. We need moral leadership and he’s done everything to divide us and has just used one of the most sacred symbols of the Judeo-Christian tradition. We so disassociate ourselves from the messages of this president. We hold the teachings of our sacred texts to be so so grounding to our lives and everything we do and it is about love of neighbour and sacrificial love and justice.”

I have no window into Donald Trump’s soul but it’s extraordinarily difficult to regard him as a Christian judging by his personal as well as public statements and actions. This latest circus, however, surely closes the theological door on any doubts or ambiguity. He made no attempt to pray, for the nation, for the Floyd family, for anyone or anything; he appeared to hold the Bible upside down, and nor was it his own but one provided for the scene; and I’ve seen more piety and humility in a dockside pub. Even Trump’s staff and colleagues seemed awkward and embarrassed by the whole thing, and the media response was one of furious incredulity.

The word “Bible” actually means library, a collection of books written over centuries by many different people, and containing works of history, metaphor, poetry and literal truth. I believe it to be inspired by God but not to be divine dictation, I read it as a wonderful guide to many of the great moral issues but it’s not a handbook for every aspect of daily living. It must be combined with experience, understanding and faith. But most of all it is holy, and at the centre of every Christian’s life. It’s not a tool, not a product to be marketed like some worthless trinket on a television game show. Yet cheapen and vulgarize is precisely what Donald Trump did. As I say, he committed blasphemy.

If President Trump knew scripture he’d know that Jesus said, “And whenever you pray, do not be like the hypocrites; for they love to stand and pray in the synagogues at the street corners, so that they may be seen by others. Truly I tell you, they have received their reward.” And, sorry Donald, “Not everyone who says to me, ‘Lord, Lord,’ will enter the kingdom of heaven… I will declare to them, ‘I never knew you; go away from me, you evildoers.” It’s not too late to change Mr. President, but you’re not getting any younger.