Donald Trump has dragged James Comey into the partisan muck 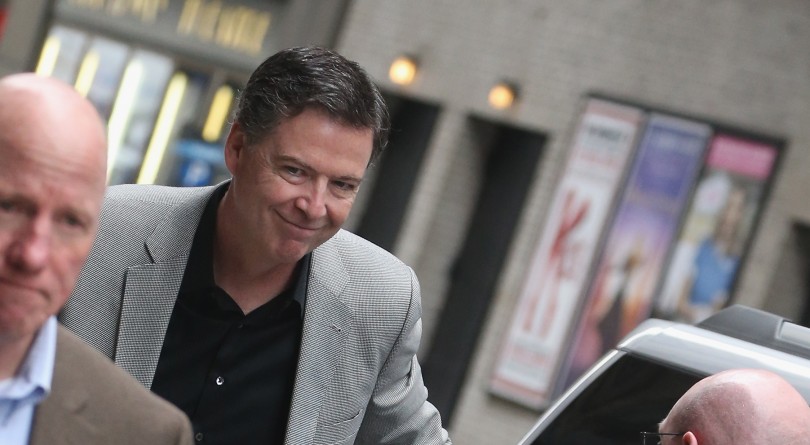 From talking about the size of his hands to how quickly he’d knock out Joe Biden in a brawl, Donald Trump likes to boast about his manhood. Still, the feature that has garnered the kind of partisan meme-making and unending commentary usually reserved for feminine appearances—pantsuits, anyone?—has been his hair.

It’s a frequent target of comedians and photographers stationed on airport tarmac, who’ve captured its unusual dynamics on a windy day. For Trump’s critics, it’s good for a laugh on even the darkest of days. And even James Comey, as director of the Federal Bureau of Investigation, found that when meeting the President of the United States for the first time, what was top of mind was what was on top of his head.

“He had impressively coiffed hair,” Comey told ABC’s George Stephanopoulos in an exclusive Sunday night interview, which marked the launch of Comey’s long-awaited book tour and the first of many media appearances this week in which Comey has defended his legacy at the FBI and criticized the man who fired him. “It looks to be all his,” Comey continued, talking about the hair. “I confess, I stared at it pretty closely and my reaction was, ‘It must take a heck of a lot of time in the morning.’”

But the former FBI director is learning that it’s difficult to claim political impartiality in the U.S. and also comment on Donald Trump’s hair.

The book is called A Higher Loyalty: Truth, Lies, and Leadership, but it might be ironically named. Comey is now facing blowback for embarking on a project that some argue can only serve to drag him from a carefully defended moral perch (he’s equally loathed by some Democrats and Republicans) and into the partisan gutters. The fallout is yet another example of Trump’s ability to bring the self-proclaimed high-minded down to his more “everyman” level, which tends to have little effect on Trump and a lasting impact on the high-minded.

In his book, Comey compares the president to a mafia boss in the way he prizes loyalty above all else. He called the president “morally unfit” in his ABC interview and said Trump may have obstructed justice when meeting with Comey alone.

He also defended his handling of the Hillary Clinton email investigation, pondering and then rejecting whether he helped her lose the election with his eleventh-hour press conference. His guiding principle throughout, he said, was a duty to impartiality, and to protecting the non-partisan reputation of the FBI.

Now, Comey has “veered onto risky terrain, shedding the trappings of a high-minded referee and looking instead like a combatant in the country’s partisan battles,” the New York Times reported. In right-wing media, his attacks on the president have been greeted with shrugs, and his wife and daughter’s fondness for Hillary Clinton scrutinized. Fox’s Tucker Carlson labeled him a “partisan.”

During an NPR interview, journalist Carrie Johnson asked Comey about those who “don’t understand why you engaged in some name-calling of the president and making fun of his appearance and the like in your book, and to them that makes some of the more high-minded points you are trying to convey in the book less powerful.”

“Yeah, they should read the book,” Comey replied. “Because I’m not making fun of the president. I’m trying to be an author,” he says, who’s following his editor’s advice to “bring the reader with you.”

It’s about a “richness of detail”—a commendable effort for a writer, but one that can quickly go awry if the intent is tell the impartial, uncoloured truth.

Of course, that’s not Comey’s intent. Not anymore. The point is to tell his story, the subjective, and not exactly shocking, one.

Comey has captured a few days’ news cycle with a book that contains some harsh words, but little substantive new information about the Russia investigation or Trump’s encounters with Comey. The book appears to be more of a media blip — along the lines of Michael Wolff’s Fire and Fury—unlikely to have a long-term impact on Trump’s reign, but able to change the way Comey is viewed by the public. And to what end?

Comey says he’s joined the anti-Trump movement out of his fear for the country, though writing a book is certainly a step further than an alarm bell.

There may be other motives, too. After all, there’s a long tradition of personal memoirs launching political campaigns. And in October, Maclean’s interviewed Comey’s friend and filmmaker Peter Landesman, who offered the prediction that Comey would run for president.

That’s too bad, because it seems like the political climate in the U.S. could use an above-the-fray figure, even one as hated as Comey. On Sunday night, in a comment that has been overshadowed by Comey’s more controversial critiques of the president, he called for Trump not to be impeached.

“I think impeaching and removing Donald Trump from office would let the American people off the hook and have something happen indirectly that I believe they’re duty-bound to do directly,” Comey said.

For Comey, impeachment would remove the responsibility of Americans to fix whatever problems they may see in Trump themselves, via the voting booth. It’s the kind of common-sense, let-the-people-decide argument that would fit well in the mouth of a former public servant with a “higher loyalty” in mind. But from this new, politicized James Comey, it’s somehow harder to hear.