Opinion: As 'The Darkest Hour' draws acclaim for its portrayal of Churchill, a comparison to Trump reveals two leaders obsessed with glory days 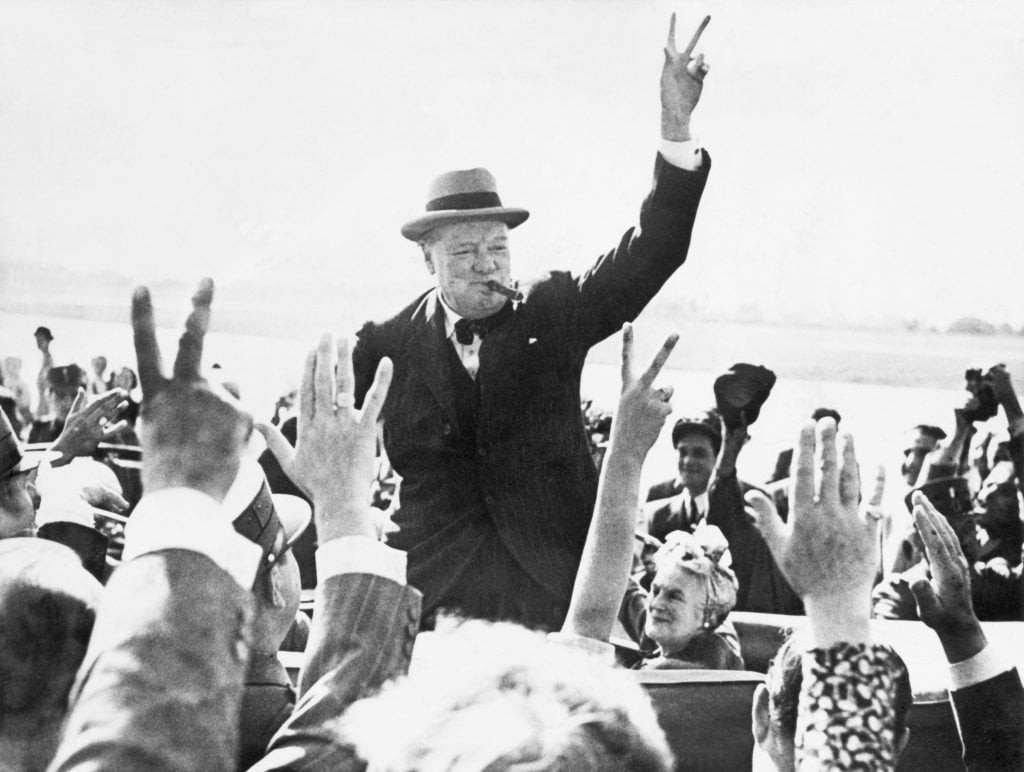 Sir Winston Churchill makes the Victory Sign as he greets well-wishers from his automobile. (Getty Images)

Donald J. Trump is so sui generis, at least in the annals of the American presidency, that he naturally invokes comparisons among commentators trying to fit him into some sort of explicable narrative. Once Trump made clear his admiration for Andrew Jackson—comparing himself to his predecessor, putting his portrait in the Oval Office, and making a post-inauguration pilgrimage to his tomb in Nashville—Old Hickory became a popular choice across the political spectrum. The left despises Jackson as a slave-owning genocidal crusader against Native Americans, while the populist right celebrates him for standing up for ordinary (white) Americans, meaning everyone found some resonance in the Jackson comparison.

For those of a liberal political bent, the appointment of a special prosecutor and the widespread anxiety about Trump’s mental stability quickly shifted the focus to Richard Nixon. That one has been on the back burner for a while, though, and will require actual articles of impeachment before coming again to a boil. Some on the left, albeit with little traction so far, have tried on President Andrew Johnson, who one American historian described as Trump’s only possible rival as “the most vulgar, racist, thin-skinned, vituperative U.S. president.” The right, meanwhile, has turned to a figure far more congenial to it—as he is to virtually everyone in the Anglosphere—Winston Churchill, British prime minister, wartime hero and consistent winner (even over Shakespeare) of every poll seeking the greatest Englishman in history. It is an idea whose time has come and one, somewhat surprisingly, that has some meat on its bones.

Not that the superficial links being drawn aren’t flat-out crazy. The immediate cause of the Churchill-Trump comparison, besides Jackson-Nixon fatigue, is the critical success of Darkest Hour, an account of Churchill’s first days as PM, when it looked as though Nazi Germany would win the war in blitzkrieg fashion. The film has six nominations for Sunday’s Oscars, with Gary Oldman’s portrayal of Churchill putting him among the frontrunners for Best Actor. Mike Huckabee—former Arkansas governor, squirrel eater, father of Trump’s press secretary Sarah Huckabee Sanders and one of the Republican presidential nomination contenders obliterated by Trump in 2016—saw the film and tweeted the comparison in December. He even stretched it out to include the longtime conservative trope that Trump’s predecessor, Barack Obama, was very much like Churchill’s predecessor, Neville Chamberlain: both cowardly and/or naïve appeasers of international evildoers, succeeded by two clear-eyed heroes. “Churchill was hated by his own party, opposition party, and press. Feared by King as reckless, and despised for his bluntness. But unlike Neville Chamberlain, he didn’t retreat. We had a Chamberlain for 8 yrs; in @realDonaldTrump we have a Churchill.”

READ: Trump vs Nixon: A look at how the two presidents compare

Historians, and ordinary people who simply admire Churchill, have been busy shooting this concept full of holes. In a tweet liked almost 20,000 times, Norwegian MP Kristian Tonning Riise contrasted a man who spent 55 years in parliament—31 as a cabinet minister and nine as PM—soldiered in 15 battles and picked up the Nobel Prize for Literature along the way, with one who thought the U.S. presidency was a good starter job in public service. Riise’s conclusion on the Churchill-Trump comparison? “Sure. Totally same thing.” Scholars, when they ceased sputtering, agreed with Riise. The surface differences are indeed blindingly obvious. Churchill: intelligent, courageous, magnanimous (usually), a reader as well as a writer, capable of speaking in entire paragraphs, prodigiously hardworking despite the alcoholic fog; Trump: not so much, despite the teetotalism.

Look beyond the obvious, however, and the two men begin to inch closer together. “There is Churchill’s self-regard,” notes Susan Pedersen, a professor of British history at Columbia University, “his tendency to think his judgment better than other people’s regardless of the subject.” (Churchill’s long string of military disasters demonstrates that, to the extent that the Chief of the Imperial General Staff made an exasperated but admiring diary entry in September 1944: “Without him England was lost for a certainty, with him England has been on the verge of disaster time and again.”) Churchill may not have said, as Trump did, “I’m speaking with myself, number one, because I have a very good brain”—but he did think it.

Trump, whose tweets and utterances are frequently incomprehensible when not outright mendacious, seems to believe—in the moment of speaking—in everything he says, a judgment also levied against Churchill, most notably by Australia’s wartime prime minister, Robert Menzies: “His real tyrant is the glittering phrase so attractive to his mind that awkward facts have to give way.” That “glittering,” though, points to one large gulf between president and prime minister—Trump is famous, in his own mind, for having the “very best words,” while Churchill is famous in everyone else’s for precisely that reason. And, as Pedersen notes, “just because two men have bombastic personalities doesn’t mean they are the same kind of person.”

So then, what about Churchill’s adherence to “the hard end of policing and repression,” in Pedersen’s judicious phrase, during the 1926 British General Strike—what Christopher Hitchens, a rhetorician in the Churchillian style, called his “ruling-class thuggery against the labour movement?” Churchill was a law-and-order man like Trump, to be sure, and just as instinctively inclined to the military option in a crisis. (Yet Churchill, for all his strong sense of Britain’s interests, was “not great at thinking about its great power capacity,” says Pedersen dryly.) The two men also share a common indifference to large swathes of government policy: domestic and economic for Churchill, anything not directly involved in trade or war for Trump. The lack of political convictions made it easier for both, in pursuit of their ambitions, to switch parties. Trump used to sound like a liberal Democrat, and occasionally still does—for tweets at a time—on Dreamers and gun control; Churchill crossed party lines twice, remarking, in one of his many memorable phrases, that it “takes a certain ingenuity to re-rat.” Both are clearly ethno-nationalists (to put it mildly), with racist expression more muted in Trump, in deference to the times, and louder in Churchill, whose era—and empire—were more openly racist.

Churchill, in fact, may have been more openly and cruelly racist that even his times found acceptable. His admiring doctor Lord Moran was distressed to admit that, when speaking of other races, “Winston thinks only of the colour of their skin.” He spoke approvingly of unleashing chemical weapons on rebellious Kurds in Iraq: “I am strongly in favour of using poisoned gas against uncivilized tribes.” But Churchill saved his greatest racist vituperation for Indians seeking national independence: “I hate Indians. They are a beastly people with a beastly religion.” During the Bengali famine of 1943 —a disaster caused by imperial policies—as many as three million people perished while Churchill refused to interfere—it was the victims’ own fault for “breeding like rabbits.” So important to Churchill was control of India, notes Pedersen, that he believed Indian nationalists had to be “crushed.”

All those tendencies—the indifference to party and policy, the ethno-nationalism and racial hierarchies, the belief in hard power and forcible repression—are bound up in what colours both men, and brings them closest together, a kind of nostalgia for glory days. Observers are divided on the era to which Trump wishes to return America, the historical moment where he sees the greatness he promises to bring again: was it the 1920s, fun times for New York zillionaires, or the more sedate 1950s apparently favoured by his base? In truth it is 1945, America’s supreme moment as the world’s hyperpower. Pundits puzzled over how he could take  major political risks over so friendless an economic policy as a 25 per cent steel tariff, must have missed one of Trump’s more informative tweets: “If you don’t have steel, you don’t have a country!” How else could you build the ships, tanks and planes that made the U.S. great as it swept across the Pacific Ocean and Western Europe 73 years ago?

And in a corner of Churchill’s mind it was always Britain’s seemingly endless Edwardian summer—he was, in his own way, a Make Britain Great Again man. For him Britain had to hold on to India because that’s what made it a Great Power, and its only moral claim to controlling India was that Britain was a higher civilization. Victory over Hitler, Churchill told the House of Commons, would let the whole world “move forward into broad, sunlit uplands,” while its defeat would send every nation “into the abyss of a new Dark Age.” That’s how Churchill and Britain managed, during the Second World War, to stand for both British power and the rights of small nations, for empire and democracy. It’s a cast of mind shared with the American hegemon that succeeded the British Empire, becoming an entity that championed international human rights and directed CIA-backed coups at the same time.

The signal difference, the one that forever cleaves Churchill from Trump, is that the former, in the better angels of his nature, genuinely believed in his cause and was prepared to defend it to death. The latter has abandoned even rhetorical references to American soft power and values: it’s all walls and tariffs, fire and fury, and no sunlit uplands at all. As simultaneously alike and profoundly different as they are, ultimately Donald Trump is no Winston Churchill.