Opinion: No man is an island, even the U.S. President, and Tabatha Southey—his chartered Lookin' Mighty Guilty consultant—is thrilled with her client 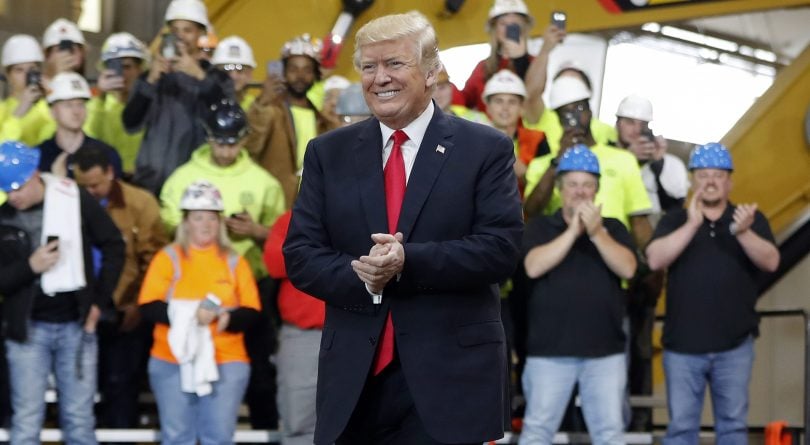 It’s time that I came out with the truth. You might know me as Tabatha Southey, humour writer, but I’ve been moonlighting, drawn back to my second career by the 2016 American elections. That’s right: I originally trained as a chartered Lookin’ Mighty Guilty consultant, and I guess I’m here to blow my own horn because I’ve had a such a great week!

I’ve been employed as Donald Trump’s Lookin’ Mighty Guilty consultant since May of 2016. Until then, Trump was getting decent metrics in “shiftiness” and “skeeviness,” but I feel like when I came on board, I tipped the scales to “guilty.”

For starters: When Trump said “It’s none of your business” after George Stephanopoulos asked about the then-presumptive GOP nominee what his tax rate was? That was me!

I should give credit where it’s due: Trump had, after all, been teasing his tax returns like he’d filed a nice set of nipples (one corporate, one personal) since 2011. Was he going to reveal them? Was he going to let them slip? The mogul’s response was always a “Ma-a-a-a-y-be,” and nothing that coy ever looks innocent. Back in 2011, Trump promised to release his returns if Obama released his birth certificate. It was like a Dance of the Craven Veiled Racism, and it certainly made him look like what we in the field call “darn sneaky.”

I know a lot of people who worked for Trump had a pretty rough (and brief) time of it, but he’s been a remarkably easy client for me. When it comes to Lookin’ Mighty Guilty, Trump’s a natural. I wish I could take credit for that whole “trying to swap his tax returns for Obama’s birth certificate and then backing out” episode: As guilty looks go, “the contents of my tax returns would be a fair trade for documents proving that the President of the United States is a secret Muslim-churian candidate not legally qualified for the office” is pretty inspired. But that was a Donald Trump original.

When the White House released Obama’s birth certificate, giving the closest thing that America has ever come to an official governmental eye-roll, Trump moved the goalposts, popping a wheelie as he did so: “If I decide to run for office, I’ll produce my tax returns, absolutely. And I would love to do that.”

Nothing says “I would not love to do that” as loudly and clearly as saying “I would love to do that.” Ask me to come out and see some live jazz with you next weekend if you want to test this theory. That was smooth, sure, but it was my professional opinion that it was going to take a “It’s none of your business” said on network television to really drive home our “I have so much to hide” message. And under my tutelage, Trump went there.

But there are a lot of us consultants out there. For a while, I shared an office with Trump’s Lookin’ Really Creepy consultant, but he quit not long after that whole “Trump eagerly states how many years it would be before a then-elementary school student would be dating him” incident came to light. Poor guy didn’t feel he could top that. But I think he’s too hard on himself. That creep campaign where Trump agreed that Howard Stern could call his daughter Ivanka a “piece of ass” and reminded Stern that she had “actually always been very voluptuous”? That was pure genius. Trump’s Lookin’ Really Creepy consultant was robbed at the Golden Oh, That’s Grosses, I tell you—but that’s the business.

As part of my broader-guilt-by-association agenda, I’ve been doing some individual work with Jared Kushner. His “Child Who’s Been Dead A Hundred Years Who Suddenly Appears in the Background of your Family Photographs” look makes everyone around him look extra guilty. I powder his face a bit, sure, but mostly I feel like he’s doing my job for me. It was Jared who set up the meeting with Putin’s pal, Sergey Gorkov, leaving an email trail I wish I’d written myself.

We focus-grouped that line to death, and then, when each focus group was leaving, we stage whispered about “the plan” with a man wearing a “Sergei” name tag, before shushing each other when we “noticed” our focus groups were in the room.

“Lookin’ guilty, lookin’ good,” as one of my old professors used to tell us, and a lot of people have said to me about Trump, “Man, could the guy look anymore guilty?” I just say: “Just watch me.” Even before this week, I thought I was a shoo-in for a Red Hand Award for best guilty looker in a supporting role, now I’m think I may even be up for a prestigious Smoking Gun.

This is a massive operation I’ve been coordinating. So many of Trump’s aides and family members met or corresponded with Russians or Russian surrogates, poorly disguised intelligence agents, and cutouts—hey, Wikileaks, how’s it going?—that it’s difficult to keep track. I just told everyone to deny these meetings ever took place and, when caught out, to start babbling about Russian orphans. Then I just waited for the magic to happen.

I’ve also had to manage the budget. There were what can be called “the big ticket” items—payouts to highly credible sounding and articulate adult film stars and Playboy models don’t make themselves, you know. (Though attempting to essentially spin it that way after the fact will quadruple your lack of credibility investment, a message I can see the Trump team took to heart.)

I’ve learned to follow my instincts and take occasional creative risks. Trump flat-out telling NBC’s Lester Holt that he fired FBI Director James Comey because he didn’t like the way “this Russia thing” was going wasn’t subtle, but sometimes your musical needs a big ol’ kick line of corruption. I considered asking Trump’s legal advisor John Dowd to “accidentally” call Trump “my convict” instead of “my client,” but he quit last week before I got a chance to pitch the idea.

I was disappointed, but then this week’s news broke that Dowd went around last summer suggesting that the president might pardon Michael Flynn and Paul Manafort should they end up facing criminal charges as a result of the investigation into Russia’s election interference, and that is just so much better. Pretty much nothing says guilty the way that does, especially because special counsel Robert S. Mueller, who is in charge of the Russia investigation, indicted Manafort on charges of tax fraud and money laundering in October, and Flynn pleaded guilty to lying to investigators and agreed to cooperate with the Mueller probe in December.

It’s difficult to believe that Dowd would float this idea without Trump’s knowledge and that, if the notion of a pardon was bandied about, winning Flynn’s and Manafort’s cooperation wasn’t the end goal.

Flynn and Manafort are just a few of the people with Russian connections with whom the President has surrounded himself or with whom the Russians have surrounded the president, depending on how you want to look on the situation. It’s difficult to think of a more disreputable ensemble. I barely had to add anything.

Oh, wait, did you guys actually believe Steve “All The Shirts” Bannon was a real person? That was a lot of fun. But hats (and shirts!) off to Andy Serkis. He’s one hell of an actor. Thanks, Andy.

So yeah, no commentary or biting satire from me this week. Sometimes a political operative just wants to feel appreciated. Oh, and make sure to tune in for the President’s next press conference. I’m planning on having him start by announcing, “No, I’m asking the questions here!” and then have him ask the press corps, anxiously, very anxiously, “Hey guys, how do you to delete your browser history? No, you can’t see my laptop, just tell me!”