Tabatha Southey: Donald Trump loves to talk about the stock market—but as it tumbles, he seems to be trying to emotionally manipulate it back to life 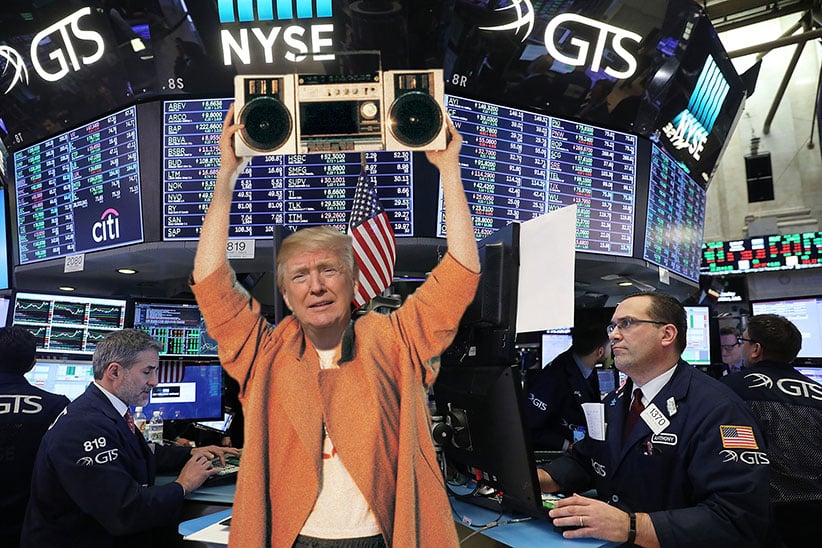 “The Stock Market has been creating tremendous benefits for our country in the form of not only Record Setting Stock Prices, but present and future Jobs, Jobs, Jobs,” gleefully tweeted the President of the United States on Jan. 7. “Seven TRILLION dollars of value created since our big election win!” Donald Trump uses capital letters as though they are really expensive and he wants everyone to notice how many of them he can he can afford—and he loves to talk about the stock market.

Trump loves to talk about how well the stock market is doing, and he loves to talk about how badly it would be doing if not for him. “Your stocks would be down 50% from values on Election Day” if “Crooked Hillary” Clinton had been elected, he tweeted on New Year’s Eve. Wow, 50 per cent. That is a large number for a man to pull out of his… well, I’ll just finish this sentence by saying that it always feels as if anytime Trump talks about finances without using the word “GAZILLION,” he has demonstrated self-restraint.

Someone needs to tell the man this does not have the effect he seems to think it has.

President Trump is That Guy In the Airport Lounge with a Picture of his Girlfriend Set as the Wallpaper on His 17” Laptop, but writ world-leader large. President Trump would like you to notice how hot his Stock Market is. So when this past Monday, the Dow Jones experienced the largest single-day point drop in its 133-year history, erasing its gains for the year, the first thought on most people’s minds was not “What’s next?” or “Dear, God, what does this mean for my retirement?” but “What on Earth is the President of the United States going to tweet about this?”

Three things struck me about this tweet. First of all, indications are that this week’s dive was so bad the President of the United States has been forced to reduce his capitalization expenditure—no doubt to keep up the maintenance on his collection of really stupid nicknames. Secondly, it strongly suggests that Trump doesn’t understand how the stock market works. For example, sometimes bad news makes it rally. I think most of us have been there, and the stock market is, after all, a collection of markets where a wide variety of things are traded by a wide variety of humans, which is what makes its next move so difficult to predict. It’s not a single monotheistic entity that just needs a good talking to from time to time. Thirdly, the tweet is weirdly accusatory and personal; you almost have to give Trump credit for having the vision to try and emotionally manipulate the stock market.

The stock market is making a “big mistake,” the president wants you to know. Apparently, there’s a bull market, a bear market, and a just-doesn’t-know-what’s-good-for-it market. Some might have thought that if a nation’s leader needs to comment on the stock market—and he doesn’t—he might want to try and calm everyone down. He might want to say things like “corrections happen” and “we’re on the right course,” perhaps vaguely mentioning a few different indicators of economic health. Another leader might try and reassure investors and the public at large. He might be able to keep some space between himself and the mess, but Trump has rather closed off the option of a distanced, measured response to the market’s meltdown because he’s endlessly boasted that he’s personally responsible for all its gains. Trump talks about the stock market as if he gets up every morning and makes it a smoothie before it opens.

As a rule, it is highly unwise to base too much of your identity on any single relationship. It leaves you vulnerable. However, if you have, for example, spent the past year basically asking the entire world if it does not think that our stock market has “quite a set on it” once every 35 hours, it’s best to try and act cool when the whole thing starts to fall apart. Don’t, as Trump did, say anything that sounds like “the market didn’t break up with me! I broke up with the market! The market is crazy! We used to be so happy, but the market is not acting rationally anymore!”

With his “big mistake” tweet, Trump might have well have issued a statement saying, “Well, it doesn’t look good now, but well, we’ll just have to see how that old Trump magic works on the market, won’t we?” I fear we now have to look forward to Trump announcing he’s going to throw a party for all the other cool investment options and that stocks aren’t invited, just as he held an exclusive reception for all the countries that didn’t vote for the United Nations’ resolution to condemn his administration for recognizing Jerusalem as Israel’s capital. No doubt Banknotes Stuffed In A Mattress and Real Estate in Florida have already received their “save the date” notifications. But when that fails, Trump will be on the phone to the Dow the next day saying, “No, I was not flirting with putting all my money into a wildly unstable pseudo-currency backed only by alpaca sock-loving libertarians and drug dealers, Bitcoin was flirting with me!”

I fear we’re only days away from a security camera capturing the the president trying to get the stock market back in shape by leaving flyers for a gym “casually” lying all over Wall Street. I’m not sure I want to find out how investors will respond to him referring to the “Little Stock Market” in a tweet, or saying he doesn’t remember meeting the Stock Market which never had a big role in the economy anyway.

I suspect that kind of behaviour isn’t going to win the market back for Trump. Indeed, the Dow Jones industrial average fell nearly 600 points, or 2.4 per cent, early Thursday afternoon. Basically, Donald, Ms. Exchange has gone to her mother’s.