Donald Trump proves narcissism is no cure for COVID-19

Andrew MacDougall: In his sickness, the president had a chance to show empathy and solidarity. Instead, he did what he always does: make things worse. 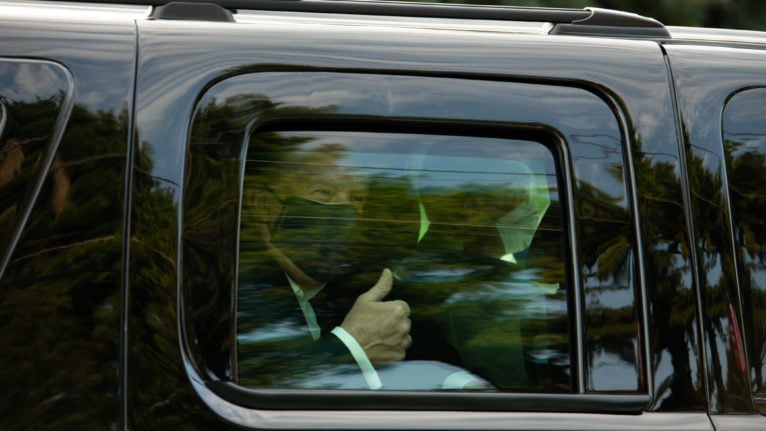 Trump wears a protective mask as he is driven in a motorcade past supporters outside of Walter Reed National Military Medical Center in Bethesda, Maryland, on Oct. 4, 2020 (Graeme Sloan/Bloomberg via Getty Images)

If the plan was to intentionally infect Donald J. Trump with the coronavirus so he could shrug it off and finish off the campaign as a BIG STRONG MAN™—as per the scuttlebutt in the darkest pockets of the internet—it’s safe to say that not everything is going to plan.

For one, the MAGA man remains at Walter Reed National Military Medical Center, where he is gobbling experimental cocktails like a teenager let loose on his parents’ liquor cabinet. The steady flow of steroids, antibodies and antivirals being injected into the presidential blood certainly go a long way toward explaining the series of bizarre photos, videos, ALL CAPS TWEETS, and ill-advised secret service joyride unleashed by the president over the past few days. If this is indeed the plan, it is in dire need of rails.

Of course, the plan was never to intentionally infect the Leader of the Free World with anything, especially with a deadly virus known to disproportionately impact the elderly and obese. Applying Occam’s Razor, the (far) likelier explanation is that a man who took no visible precautions against the virus got felled by it after mixing with hundreds, if not thousands, of strangers over the past week. I understand the medical term for this is ‘karma.’

Which isn’t the same thing as schadenfreude, i.e. the sentiment now rippling through the hearts of most Democrats and Trump-haters. That a man who has spent so long downplaying a killer virus is grappling with its effects is seen as just desserts. Regardless, all fair-minded people surely wish the president, his wife, his communications director, his press secretary, his senior advisor, his newly-ill colleagues from the Senate, various rally and fundraiser attendees, and all of their new friends made through contact-tracing, a speedy recovery.

But what if intentionally infecting Trump to engender sympathy had been the plan? Could it have worked?

In a narrow sense, yes. A leader’s struggle and recovery from illness can indeed ‘play’ very well with the press and the public. Just ask Ronald Reagan after he was shot in 1981, or even Boris Johnson after he caught his own dose of COVID-19. People tend to rally around their leader when he or she is under threat. A poll boost is not an unknown side-effect.

Then again, Reagan survived an assassination attempt, a far more tragic event. And the British PM was felled by COVID-19 when it was still relatively new to the world. Trump has no such excuse. We now know enough about the virus to take evasive action. Not that this president has been listening. Indeed, thanks to his frequent peddling of misinformation, Trump is the main reason why so many Americans have fallen in with the virus. Even to this day, after Trump has been in the hospital for four days, White House staffers have been given little to no guidance on how to best protect themselves from their presidential exposure. There is no goodwill to be had, even at (the White) home.

And even if there was some hanging around, this White House would have squandered it for one simple reason: Donald J. Trump. A plan to harvest sympathy cannot rely on a narcissist for delivery.

Sure, Trump could have humbly narrated his illness, conveying the ups and downs of both his feelings and treatment. But this would have meant admitting vulnerability, something Trump has never done. Trump could have appealed for Americans to take the proper precautions to defeat the virus. But this would have meant alienating his base, many of whom believe the virus a hoax. Trump could equally have expressed solidarity with the millions of Americans who have been impacted by the virus, and the families of the hundreds of thousands who have lost their lives to it. But this would have meant empathizing with strangers, something Trump appears incapable of doing. Trump instead released a video in which he says, amongst other things: “I learned a lot about COVID. I get it. I understand it.” That’s an awful lot of “I” and no “we” or “us.” The solipsism is stunning.

It’s also entirely within character. And that’s the problem. Trump can’t conceive of a universe in which he is not the centre. Just ask the poor Secret Service agents in the presidential limousine who had to expose themselves to Trump’s viral load because their narcissist boss needed a boost from the diehards gathered outside of the hospital. Quarantine? That’s for losers.

Far from embracing an opportunity to change the debate around COVID-19, Trump has instead managed to do what he does to everything: make the entire situation a five-alarm sh-tshow of misinformation and argument. In this scenario, Trump and his advisers are the pathogens, not the victims of disease.