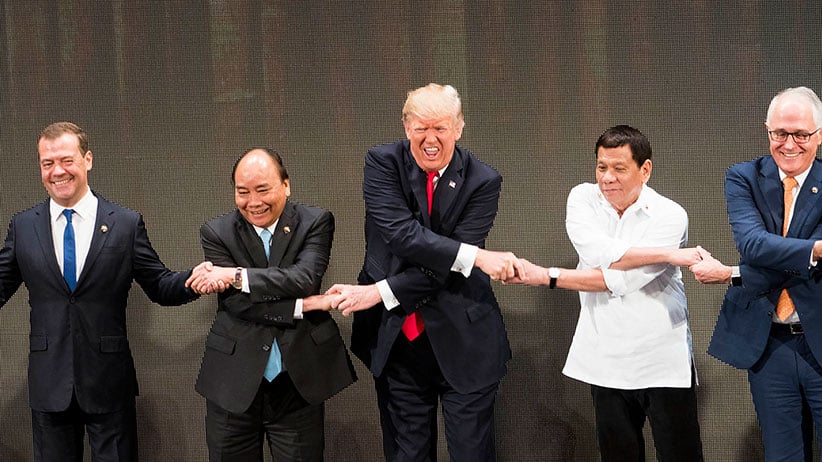 Since Donald Trump began welcoming dignitaries to the White House, and traveling the world as President of the United States, much has been made of his various handshakes. They have been examined for symbolic significance of both Trump’s status amongst his global peers—whose hand was in the power position?—and for potential clues as to what world leaders really think of him. The photos and videos have been studied perhaps unlike those of any world leader previously, even though awkward handshakes between leaders happen pretty much all the time.

It was no surprise, then, that Trump’s bizarre facial contortions during an already-contorted group handshake lineup at the ASEAN conference in Manila drew some attention. As Trump reached, one arm over the other, to grasp the hands of the men standing to either side of him, he twisted his face into what pool reporters later described as an “exaggerated grimace.”

On Sunday, one photographer—Doug Mills of the New York Times—tweeted a particularly unflattering frame, which quickly went viral on Twitter. In it, Trump’s face recalls the expression he pulled while infamously seated at the wheel of a semi truck at the White House back in March – a photo that also lit up the internet as proof, to some, of Trump’s immaturity. Mills’s photo from Manila was tweeted, as the Washington Post speculated, perhaps as a form of “revenge.” Friday, Mills had tweeted a solid black frame, noting that the White House had barred pool photographers traveling with the president from taking any photos of the ASEAN conference that day.

As the Manila handshake photo made the rounds Sunday, and was subjected to the usual brand of dismissive Twitter commentary, few seemed to note that the most notable person posing for the photo wasn’t Donald Trump, but the man standing directly to his left, holding his hand: Philippine President Rodrigo Duterte.

Press blackouts and accusations of “fake news” from the Trump White House are indeed troubling, but Duterte’s approach to journalists and journalism is far darker. As the global journalism watchdog group Reporters Without Borders noted in its 2017 report, the Philippines “continues to be one of the most dangerous countries for the media.” And Duterte is very likely not going to make things much better.

Since taking power in 2016, Duterte has introduced an anti-drug initiative that has, by all accounts, gone far beyond any justifiably sane means to target criminals. In short, he is allowing police to simply kill anyone suspected of being involved in the drug trade. Responding to the news that police killed 32 people in a series of raids in August, Duterte said, “If we could kill another 32 every day, then maybe we can reduce what ails this country.” In March, Human Rights Watch noted that while Duterte had not specifically called for extrajudicial killings, his “repeated calls for killings as part of his anti-drug campaign could constitute acts instigating law enforcement to commit the crime of murder,” and could be considered guilty of crimes against humanity.

But Duterte’s dislike for criminals extends to journalists, too. After news broke that a journalist had been murdered in March, 2016, then-president-elect Duterte responded by saying, “Just because you’re a journalist you are not exempted from assassination, if you’re a son of a bitch,” before noting that Jun Pala, a journalist and politician murdered in 2003, “deserved it.”

Monday morning, U.S. news readers awoke to find that while their president—who has called mainstream media the “enemy of the American people,” and singled out reporters for abuse—was not echoing Duterte’s most extreme language on reporters, they were finding some common ground on the subject.

At the start of a bilateral meeting at the sidelines of the ASEAN conference, the leaders made brief statements to gathered journalists and photographers.

“We will be discussing matters that are of interest to both the Philippines and… with you around, guys, you are the spies,” Duterte is reported to have said, referring to media who were being ushered from the room after trying to shout questions.

According to the pool report, Trump responded by laughing: “Hah, hah, hah.”

“You are,” Duterte said.

What the leaders said afterward, beyond the ears of reporters and the photographers’ lens, is unknown. Beyond what representatives for Trump and Duterte will officially say, the record will be blank. In the Philippines, as more reporters are murdered every year, it is possible this will soon be just how things are. Americans should ask whether they really want the same.