Donald Trump: The board game

Tabatha Southey: A Trump board game would need a constantly shifting player count of between four and 36, with players constantly eliminated or added halfway throughout the game 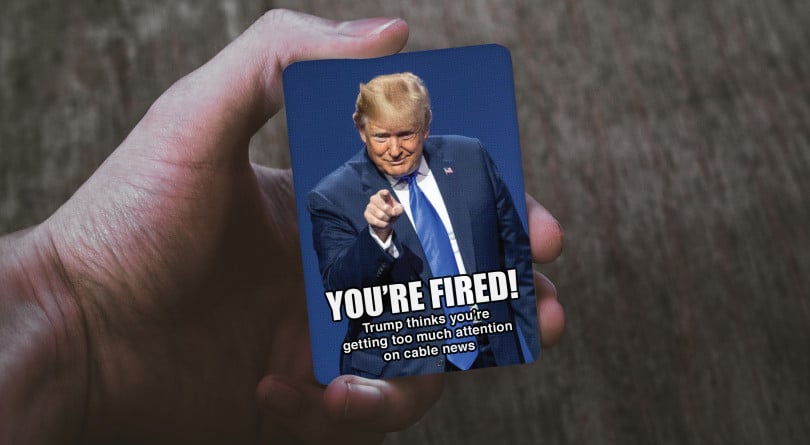 The big hit around our house over this past holiday season was the recently released board game, Watergate, from Matthias Cramer and Capstone Games. There’s undoubtedly a German word for the special kind of serendipity where a gift purchased for one person—me in this case—ends up brightening up the holiday for a whole family, which is what Watergate did for ours.

To get the basics out of the way, Watergate’s box says it can be played in 30 to 60 minutes and, in a startling turn of events, Watergate does indeed take between 30 and 60 minutes to play. For non-board-gamers, this accurate estimated play time makes Watergate the cardboard equivalent of a unicorn that lays golden eggs.

The box also states that the game is for exactly two players. This, too, is deadly accurate and led to no small amount of shady dealings and clandestine operations around the four-person Southey household, all to determine who would get to play the game next. The board was practically traded off in a dark parking garage.

READ MORE: Trump vs Nixon: A look at how the two presidents compare

One player in Watergate takes on the role of the “Editor,” working to tie two of the many possible informants (obviously, you want to get John Dean on your side as soon as you can) directly to the president. The other player represents the Nixon administration, a position my rat-f–king family was disturbingly eager to play. That side works to busily hide evidence, encourage those same potential informants to keep mum, and generally play for time. Their endgame is to keep the scandal from reaching Nixon (positioned dead centre in the middle of the game’s evocative “push pins and string conspiracy” board) long enough for Tricky Dick to run out his second term.

At the core of this struggle is a sort of tug-of-war. Evidence (represented by tiles in three colours) starts each round at the centre of a “research track” with five spaces on each player’s side. Every turn, a player must play a card from their hand and this card can allow them to move one evidence token a varying number of spaces towards them. If they can get a piece of evidence all the way to the fifth space on their side of the track, or have it end anywhere on their side at the end of a round, it’s theirs. Once claimed, evidence is used to draw a line on the board between an “informant” and Nixon, if you’re playing as the press, or to close off a space, forcing the investigation to manoeuvre around the obstruction if you’re playing for Nixon.

Watergate has been glowingly described as a shorter, simpler Twilight Struggle, and it certainly delivers, but this core mechanic primarily brings to mind another GMT political strategy game, Churchill, which was my Christmas gift five years ago. Only, with just two players in direct competition and no non-player Nazis to be defeated, Watergate’s investigatory push-and-pull can feel even more vicious than Churchill’s simulated war conferences.

RELATED: Why Donald Trump is like Richard Nixon all over again

This make’s Watergate tense enough all on its own, but there are a number of complicating factors that make every card play an agonizing decision. Evidence, you see, isn’t the only thing up for grabs. Players also compete for “momentum” tokens. If Nixon claims five of these tokens, his second term—and the game—ends before he can be pushed to resign.

The Nixon player, seeing his opponent’s trail of evidence creeping ever closer, will naturally want to snatch up evidence and block the path, but this means a card not spent on the momentum he needs to actually win.

Similarly, the Editor will want to keep following the money (or tapes, or documents), but if he ignores momentum entirely, Nixon will be able to easily snap it up, leaving the Editor with little time to make his case.

Each move, then, becomes a balancing act between racing for your win condition while thwarting your opponent just enough to give you the time you need.

Even that, however, is not everything a player has to keep in mind. Beyond the two directly victory-related things up for grabs, the two sides also struggle over an initiative token, an element I think most journalists will understand. This innocuous white disc doesn’t move either side closer to winning on its own but, by allowing whoever claims it to both draw an extra card and go first (and last, when the other player has no chance to respond) in the next round, it can set players up for victory.

Finally, players aren’t just forced to decide where to spend their precious cards, they have to decide if they’re going to spend them at all. Beyond the ability to move tokens a certain number of spaces, each card also comes with a unique action, representing major events—play The Saturday Night Massacre card to move the initiative token and all evidence tokens back to the zero space (boom!)—or the efforts of key players. What you got, H.R “Bob” Haldeman and Ben Bradlee?

These special actions do everything from turn your opponents’ cards against them, moving whatever they were after to your side instead, to giving a supposedly Nixon-loyal source a change of heart. Each turn is thus a choice, not just between racing forward or tripping up your opponent, but between either of these straightforward options and the less direct, but often very powerful effects offered by your cards.

In short, Watergate is a good game and an interesting look at an increasingly relevant period in history, and you should both play it and read the excellent historical notes that fill its manual. However, the game has raised some questions in my mind. Not of politics, or of history, but of game design.

My heart goes out across the years to the designers who will one day be charged with cardboard-ifying the great political scandal of our time. I mean, what do you even call such a game? Trump-Russia-Ukraine-But-Also-Iran-And-What-the Hell-This-Charity-In-New-York-Gate might be a bit hard to fit on a box. Who knows, maybe But Her Emails! will top the Board Game Geek charts of 2064. I can’t imagine one could limit the game to just two players; I can’t see how you’d even define the sides with neat victory conditions. After all, it’d have to be a game in which the Trump administration is set against its worst enemy: the Trump administration.

To convey the feeling of working in the Trump administration during All-The-Things-Gate, I imagine you’d need a constantly shifting player count of between four and 36 at the board with players constantly being eliminated or joining halfway throughout the game. On the plus side, it’d be natural and thematic to define each turn as representing one 11-day “Mooch.”

Players might struggle to accumulate different types of victory points depending on whether they’re playing as “Grifters” or “Probably Racist But Maybe Also Dominionist Ideologues.”

RELATED: A Trump-empowering act of impeachment

Capturing the feel of America’s current political climate would require bringing back some out-of fashion-mechanics. There would be the inevitable player elimination cards like “Trump thinks you’re getting too much attention on cable news. You are fired,” or “Tucker Carlson doesn’t like the cut of your jib. You are pushed to resign,” or “Some Internet troll dug up a vacation photo of you smiling next to a ‘bird-killing,’ golf course adjacent windmill. Lose 10 Grift and five Ideology points humiliating yourself trying to get back in the president’s good graces. Then you’re fired anyway.” I imagine half the event deck would consist of variations on “The president tweeted what about doing war crimes? Lose a turn as you desperately spin this,” or “Giuliani is on TV again. Lose all your turns to internal screaming until you roll exactly four.”

Over it all would hang the threat of one player drawing the dreaded “Welp, he’s started another war in the Middle East. Go play a few rounds of A Distant Plain and try not to cry. Whoever wins, everyone loses five Grift points” card and adding nine hours to one of “What Now, Oh Jeez, Really?’s” usual two-hour-hour long rounds.

It’d have to be a pretty subsystem-heavy game. An entire separate board would need to be dedicated to a casino building mini-game with its own set of resource cards (gilt, steak, shag carpeting and rubles). Although involved enough to be a game in its own right, this mini-game would be played only by the Trump Bot, which would somehow always manage to lose.

Then any unfortunate player who’d just managed to score the usually much-desired Appointed Secretary of Commerce objective would have to produce a report explaining that, “Actually, nobody makes money on casinos, a lot of very smart people are saying it, the house always loses” or be eliminated from the game.

Whatever the end product, I know I plan on pity-backing the Kickstarter at the level that includes the bonus Mike Pence vs. Mulan fighting card game.