Tabatha Southey: The U.S. President recently said that the noise made by windmills causes cancer. His squabble against this so-called enemy evokes comparisons to Don Quixote. 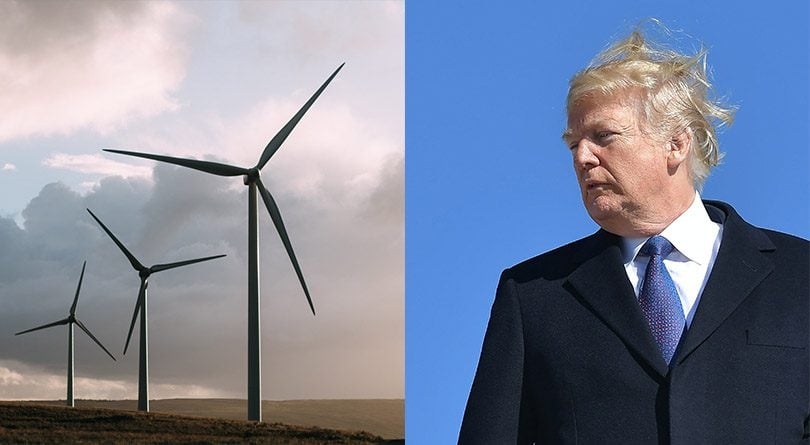 This week at the National Republican Congressional Committee dinner, Donald Trump returned to one of his favourite pastimes and, no, I don’t mean lambasting the “fake news” media as the “enemy of the people.” Although he did whine that “someone’s gonna leak this whole damn speech to the media,” while the whole damn speech in question was being broadcast on C-SPAN. I just hope I can trust all of you not to leak to this column.

I don’t mean that Trump was lavishing praise on homicidal dictators for kicks, either. No, this week Donald Trump returned to his real favourite thing: his fight against windmills.

“If you have a windmill anywhere near your house, congratulations, your house just went down 75 per cent in value,” Trump told the assembled dinners, revising his previous, entirely made up statistic wherein proximity to windmills caused a mere 65 per cent decline in property values, cited only a week before. Clearly the economists at the University of Trump’s Fevered Imaginings have been working overtime.

Trump then went on to tell his audience that “they say the noise causes cancer,” which of course it doesn’t, but for some reason America elected Weird Ranty Great Uncle You Avoid Inviting to Thanksgiving Dinner to the highest office in the land.

READ: Trump has survived the ‘witch hunt’. Now he wants to start his own.

“After this he made a noise that Vox’s Aaron Rupar reported as “Rerrrr rerrrr!” but which I personally think of as more of a “Reeeer Raaaaaair.” This, as it’s unlikely Trump has ever heard a wind turbine make this noise, or any other noise, most people don’t hear much from them, may well be his best cancer impression.

Trump having wind issues naturally leads people to, once again, make the obvious comparison to literature’s most famous Windmill Tilter-at-er, Don Quixote. Being of a chivalrous nature myself, I feel compelled to saddle my own horse and ride to the defence of the slandered Man of La Mancha. Onwards, Rozinante (how is that still not a font name?), this will never do.

Trump is obsessed with wind turbines and has been for some time. For a man with an attention span as long as his fingers, his continued interest in wind power is notable. He seems terrified by it, indeed appears to fantasize about terrorists blowing up windmills or birds taking them down. And for a man who loves to build highrises and fawn over coal, he sure claims to be desperately concerned about avian mortality rates. The truth is that if we listened to the science, or polled the birds, wind power would be the clear winner.

What with Trump’s fixation with windmills, and his apparently new preoccupation with “oranges,” I imagine the Dutch must be starting to feel a bit nervous about now. Trump has publicly referenced windmills more than 75 times since 2012, in tweets, speeches and interviews. “I know a lot about wind,” he said this week, and then of course there is the lawsuit, which may well be what propels his turbine preoccupation.

In contrast, Don Quixote, once he decides that his “giants” had been transformed by sorcery into windmills, acknowledges that said mills no longer really need to be tilted at. That decided, he moves on to the more important business of wrongly accusing Benedictine friars of kidnapping princesses.

On that note, evidence strongly suggests Trump, or at least his old squire, Michael Flynn, wouldn’t have a problem with that particular crime as long as those particular kidnapping monks had an in with the president of Turkey.

Don Quixote’s delusions are rooted in his habit of reading fantastic and illogical tales of chivalric adventure and romance with “such ardour and avidity that he almost entirely neglected the pursuit of his field-sports, and even the management of his property.” The ingenious gentleman of La Mancha’s enthusiasm for knight-errantry, fostered by these yarns, eventually inspires him to set out to emulate his heroes, setting out to be a force for nobility and justice himself.

Donald Trump’s delusions, however, which appear to be shaped by a no less steady diet of the equally fantastic and illogical tales he gets from Fox News morning shows, have done nothing to stop him considering the management of his property above all else, and that man golfs all the time.

Don Quixote promises to dedicate all of his victories to Dulcinea del Toboso. Donald Trump fights mostly to defend the virtue of his tax returns. Neither of them actually make an appearance.

While “seeing in his imagination what he didn’t see and what didn’t exist,” Don Quixote is still capable of true lucidity and even insight as in, “Hunger is the best sauce in the world.” He is also, of course, a fictional, 17th-century character and as such poses little threat to the liberal world order. I believe the worst that comes of a character like that is a musical, and that’s already happened.

Don Quixote wears a shiny, strange-looking brass basin he got from a barber as a golden headpiece, believing it to be both attractive and convincing, whereas, OK, you got me there. Like peas in a pod on that one.

Don Quixote has little family and he neglects them. Which is certainly unfortunate, but then Don Quixote would never pull rank to get his “niece under 20” or her boyfriend a top level security clearance over the objections of the intelligence community.

The Knight of the Sorry Face believes he is the victim of enchanters, as men in his position often are. The Knight of the Spray Tan Face maintains he is the victim of a “witch hunt” which is entirely rigged against him and just him, and also that the nefarious Witchfinder General has given him “Complete and Total EXONERATION” though he just can’t show you the 100-per-cent conclusively clearing paperwork right now.

The total exoneration report is beautiful and very flattering to him but it’s shy and it doesn’t like to travel and it lives in Canada and it’s not on social media so the president can’t show it to you, that’s all.

Eventually, Don Quixote concludes, “It is possible that, since you have not been knighted, as I have, the enchantments in this place do not affect you and that your understanding is unclouded, and that you can form judgments about the affairs of the castle as they really and truly are, rather than as they appeared to me,” because he is capable of reflection and growth as a character.

“The special counsel completed its report and found no collusion and no obstruction” Trump said because, in so many ways, the jury is still out there, and it’s leaking.