Opinion: Trump needs the Republicans' grip of Congress. But to keep it in 2018's midterm elections, he'll have to relinquish his greatest political gift 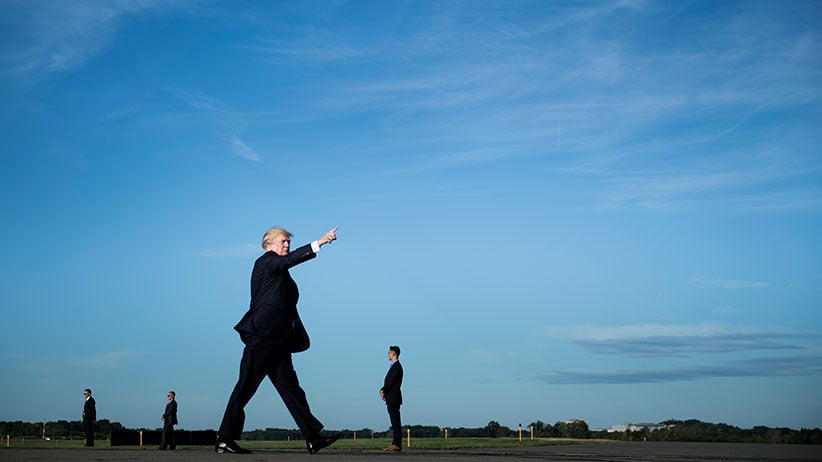 U.S. President Donald Trump walks towards Air Force One to board the plane at Morristown Municipal Airport on September 22, 2017 in Morristown, New Jersey, on his way to a rally for Sen. Luther Strange. (Brendan Smialowski/AFP/Getty Images)

If you’re reading this right now, you have something in common with President Donald Trump: you’ve almost made it through the first full year of his presidency.

Hoo boy, it’s been some nonsense though, right? It was like every day we lived was the craziest news day imaginable, until the next one came along to top it. Remember when presidents didn’t make headlines every day? There was a time, my friends, and it was a good time. But that was before we got a president with Trump’s compulsive need to be the one thing most presidents endeavour to avoid being whenever they can—the centre of attention, at all times.

Trump truly has been the leading man in our lives throughout this first year. But something new awaits him in his second: that’s when he finds out what it’s like to share the spotlight.

RELATED: Read more predictions for the year ahead

We really should give the devil his due. Trump has a rich history of deftly operating at centre stage. His exploits during his rise to power in the 2016 election season must be considered a post-modern marvel—his command of the media’s bright lights and the studied ease by which he drew them in his direction were, to the great chagrin of his competitors, second to none. During that wild-west campaign season, the only thing that ended up being broadcast on cable news as much as Trump himself were the empty lecterns bearing his name, waiting for his speeches to start.

Alas, governing has clearly not come as easy to Trump as campaigning. Nevertheless, those attention-grabbing skills remain, and he has found occasions to use them to his advantage. Whether it’s using Twitter to deflect the media or to whip up his allies, or the occasional campaign-style rallies that have reaffirmed his bond with his base, Trump has found ways to secure solace and gratification just by continuing to be the most famous man in the world.

But in 2018, American politics will shift its focus from the novelty of Trump’s first year in office to the grotty business of the midterm elections. And legislators, in turn, will expend the lion’s share of their energy on winning elections. Republicans, in particular, will be striving mightily to hold their congressional majorities in the face of electoral forces that often fail to favour the party that holds the White House.

So the window to do big legislative agenda items—the sorts of things that Trump would like to claim as part of his legacy—will largely close. And as the nominal head of the Republican Party, Trump will be expected to use his political capital and his media skills for less self-serving purposes, facilitating the electoral ambitions of his Republican colleagues.

That could mean that he’ll be asked to use his attention-summoning power so that others might bask in it. Or, perhaps more likely, Trump will be asked to keep out of sight as much as possible, so as to not endanger GOP office-seekers with the kinds of reckless statements or erratic behaviour that have become his stock-in-trade.

Trump’s already gotten a taste of what next year is going to be like, and lately, it’s not been an enjoyable experience. At the end of September, Trump watched as his political coattails failed to deliver a win when his hand-picked candidate—Sen. Luther Strange—lost the Alabama Republican Senate primary to Roy Moore. After the dust had settled, a seemingly snakebitten Trump deleted a bevy of tweets he’d composed in support of Strange, as if to erase any record that he’d ever supported him.

Multiple reports after the election suggested that Trump was wallowing in the sourness of the experience. White House officials told Politico’s Josh Dawsey that Strange’s loss “left the president, who cares about winning and being associated with winners, frustrated and sometimes visibly annoyed.” CNN’s Jim Acosta’s sources went a bit further, describing Trump as “embarrassed and pissed”—and noted that Trump launched into a “barrage of angry venting at his political team and Senate Majority Leader Mitch McConnell,” both of whom Trump felt had “misled” him.

A few months later, Ed Gillespie’s high-profile loss in Virginia’s gubernatorial contest provided Trump with a new occasion to take a resentful swipe, tweeting, “Ed Gillespie worked hard but did not embrace me or what I stood for.”

There is some difference of opinion as to whether Gillespie really did fail to embrace the president’s vision. That Gillespie shunned Trump on the trail was certainly conspicuous. However, Gillespie’s campaign message did reflect Trump’s full-throated nativist themes, which did boost the candidate’s numbers considerably. And the 1,175,731 votes Gillespie did earn were more than any candidate for the Virginia statehouse received in the past century, save for the one that mattered: Ralph Northam, his Democratic opponent. For Beltway Republicans, the Virginia race was the sum of all fears—that Trump might be better at inspiring opposition than he is at building and maintaining allegiances.

But that’s hardly a novel concern for a party or a president. Back in 2014, it was the Democrats vying for congressional seats who were keeping their unpopular president, Barack Obama, at a distance. As the New York Times’ Jonathan Martin reported in October of that year, Obama had been reduced by his Democratic colleagues to “an isolated political figure who is viewed as a liability to Democrats in the very states where voters by the thousands had once stood to cheer him.” Adding insult to injury was the fact that the man that Obama had so capably dispatched in his own election, Mitt Romney, was at that point in high demand among Republicans. It wasn’t until very late in the campaign season that Democrats questioned whether keeping Obama at arm’s length was a good idea. Indeed, the 2018 midterm might be the first one in which Democrats will run with a lusty support of Obamacare at the core of their messaging.

If this bothered Obama, he didn’t let on, and he certainly didn’t grouse about his outcast state on Twitter. Instead, he bore those slings with good grace. It’s not clear that Trump will be similarly able to contend with that inevitable first spate of stories, in which Republican midterm candidates are depicted as keeping him at arm’s length. Having a thick skin, and being willing to step offstage for the sake of a greater good, are two things that one cannot sensibly ascribe to Trump.

There’s no doubt that Trump’s shadow will loom over the coming elections. He will, in a sense, be “on the ballot.” But it won’t be in a way he’s used to—instead, he’ll have to take stock of his own assets and liabilities, and act judiciously for the sake of other people. That might mean he has to rally his base to support someone other than himself. It might mean striving to stay out of the headlines as much as he can. It’s definitely going to require him to learn more about being a party leader, and not an antagonizing insurgent. But he can’t just ignore the midterms. He needs to preserve those legislative majorities both for the sake of his legacy, as well as his sanity. If you thought the past year was a tilt-a-whirl, just imagine what life would be like for Trump with Democrats holding congressional majorities.

Trump’s never had to contend with the fact that everything is not always about him. It’s not clear that his concept of “other people” extends beyond the means by which others exclusively serve his own ends. This year of midterms is going to challenge him to give up some of the attention he craves. And that’s something else we have in common with Trump—we have no idea if he can do it. But we’re going to find out.