Scott Gilmore: The simplest explanation is that Trump is merely bumbling through the corridors of global power, but among all the missteps there have inevitably been fortunate landings 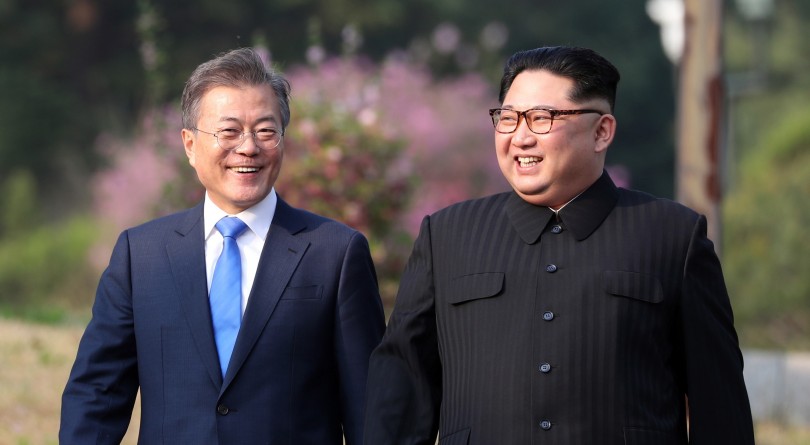 In recent years, merely getting bombastic North Korean dictator Kim Jong-un to temporarily stop threatening the world with nuclear annihilation was considered a diplomatic success. And even that small victory came at a steep price, often measured by the millions of tons of food aid shipped into the impoverished country.

Pyongyang’s petulance strategy—marked by wild-eyed rhetoric, missile tests and cyber attacks—has worked well for decades. It has not been good for North Koreans, who have endured regular famine, prison camps and economic malaise. But it has allowed the ruling elites, the military and the Kim family to maintain power while being propped up by foreign assistance.

So, yesterday, when the North Korean dictator stepped across the DMZ, shook hands with South Korean President Moon Jae-in, promised to stop nuclear testing, and agreed to end the 68-year-old war between their two countries, all in the space of a few hours, the diplomatic world had room spins.

When U.S. Senator Lindsay Graham immediately praised Donald Trump for instigating the summit and suggested he was a candidate to receive the Nobel Peace Prize, it wasn’t an entirely ridiculous notion. Consider that his predecessor Barack Obama won a Nobel less than nine months into his first term merely for having “captured the world’s attention and given its people hope for a better future,” as the selection committee put it. Trump, by contrast, may have managed a geo-political miracle—peace on the Korean peninsula.

And Trump’s list of diplomatic successes goes beyond yesterday’s triumph. He has forced two of America’s biggest trading partners to re-negotiate and modernize NAFTA. In New York, United Nations agencies and member states are working harder than they have in a decade to streamline and reform the UN and its sclerotic bureaucracy. For two years in a row, both Canada and Europe have increased their defence spending commitments to NATO after several years of decline. In the Middle East, U.S. forces have defeated ISIS and the flow of refugees out of Syria has slowed.

These are all dramatic achievements that we often overlook—distracted by the daily litany of scandal that characterizes the Trump White House. Even the historic Korean handshake was overshadowed by media coverage of the president’s rambling and agitated call to Fox and Friends earlier in the day.

MORE: After a period of high anxiety, it’s time for patience on North Korea

The Dumb Luck hypothesis would be this: Trump has no foreign policy ability or plan. He has merely taken a random walk through geopolitics, taking decisions on the fly based on whims or less. According to former advisors, he ignores his briefers, never reads the memos and will often change his mind on an issue several times before and after announcing his intentions. He has merely been lucky, having arrived in Washington just as early efforts by the U.S. military began to pay dividends in Syria, as economic hardships in North Korea finally reached a tipping point, and as the international pendulum inevitably swung once again towards UN reform, NATO reinforcement, and NAFTA renewal.

The alternative Mad Genius theory runs this way: Donald Trump is incapable of succeeding at almost everything related to the presidency. He is unable to find and lead a strong cabinet and White House team. He cannot manage relations with Congress. His legislative agenda is in tatters, and after two years in office it looks like his domestic achievements will be limited to a single tax cut. But, in the realm of high-power global politics, he does have an incredible natural ability to count the cards. His “Rocket Man Doctrine” of making outrageous threats, belittling other leaders, fawning over traditional rivals, confusing allies and enemies with policy u-turns, and always threatening to simply walk away has ingeniously re-shuffled global politics and resulted in seemingly impossible victories.

I recognize that Occam’s Razor would favour the Dumb Luck theory. The simplest explanation is that Trump is merely bumbling through the corridors of global power, but among all the missteps there have inevitably been a couple of fortunate landings.

But, personally, I am actually leaning towards the Mad Genius hypothesis. Trump, for all his ignorance and ineptitude, does have a genius for understanding that sometimes you need to just tip over the card table. The reluctance of NATO member states to increase military spending, the intractable Syrian war, and the decades old Korean crisis have all been stuck in repeating loops. They needed an external shock to break the stalemate and no other recent president has been willing to risk bold moves. Trump, in contrast, is happy to bet everything on red, and maybe he will win a Nobel Prize as a result.