Opinion: With a greatest-hits rally in Minnesota—as if he was still campaigning for the job of showman-in-chief—Trump and his supporters return to the good ol' days 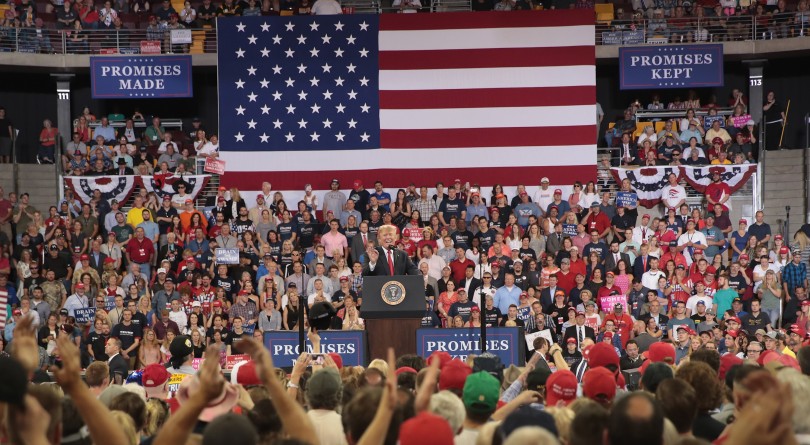 President Donald Trump speaks to supporters during a campaign rally at the Amsoil Arena on June 20, 2018 in Duluth, Minnesota. (Scott Olson/Getty Images)

On June 20, President Donald Trump held what can only be described as a vestigial campaign rally in Duluth, Minn. “Lock her up!” the crowd chanted, as a beaming Trump egged them on gleefully: “How guilty is she?”

Throughout the 2016 campaign, Trump gave the impression that holding campaign rallies was his endgame. He ran like a man who wanted only to keep running, giving the impression that what he really hoped to do was tour forever, appearing before crowds of people who know all the words. Trump ran for president, but he didn’t run to be president—he ran to be Billy Joel.

The crowd in Duluth was blissed out as well. That the man they were adoring never did appoint that concierge-like special prosecutor who would obligingly jail Hillary Clinton, as he often promised to do if elected, doesn’t seem to have phased them at all. They voted for the idea of jailing someone, indeed for the idea that she was just innately guilty.

To be fair, whether or not Trump ever makes good on his bad promises is not and has never been particularly important to his crowds. There was never any chance that a Trump administration would be able to “lock her up,” and for all his tweets about the terrible unfairness of the FBI and Department of Justice not tracking down “the server” that would provide the evidence that would put the entire Democratic Party behind bars, that doesn’t appear to be changing any time soon. If this ongoing failure on the part of the president to prosecute his opponents disappoints his supporters, it doesn’t show.

In invoking Hillary Clinton, that Duluth crowd was returning to the good ol’ days when Trump could freely threaten to do terrible, unworkable and/or illegal things if given power, then fly home and go to bed. For one night, the Amsoil Arena was a time machine, taking Trump and his supporters back to the days before Trump was given the power to put all his awful promises into action—or, more accurately, the power to abandon those promises at the first sign of resistance from Congress or the constitution. The crowd got to return to a simpler time when tearing up the First Amendment was as easy as saying “Donald J. Trump is calling for a total and complete shutdown of Muslims entering the United States.”

Glory days: they pass you by as quickly as a tweet announcing a plan to purge the military of trans people turns into a string of court rulings against the government.

From the very beginning, every Trump rally had a nostalgia-tour feel, but this rally seemed to be experienced as particularly cathartic for everyone involved. As it turns out, running the most powerful country on Earth is much harder work than inheriting millions, declaring multiple bankruptcies, getting blacklisted by every respectable bank in the world, running a sham charity and pretending to be a real-estate magnate on TV.

The first half of Trump’s term in office been filled with disappointment, for president and be-MAGA-hatted supporter alike. For decades, Trump has been preoccupied by a perverse anxiety that all the other countries are snickering at America behind its national back, and “Real Americans” were drawn to him as a remedy to the notion that the world did not respect them. Now they’ve had to contend with a world actually laughing at them, really hard—that is, in between gasps of horror.

All without even a global return to coal power to show for it.

Worse, when Trump’s “zero tolerance” immigration policy finally did stop the laughter in the past few weeks, it was in the way that an out-of-control clown car suddenly stops being funny when it runs into thousands of children, before having Jeff Sessions backflip out a window and declare the collision to be God’s will.

Who among us can blame a would-be strongman and his mob of angry followers for just needing to get back to the good ol’ days where they could wallow in their hatred of modernity without having to sweat the details?

Trump’s Mad-Libs administration has put out many bizarre and conflicting versions of why they began ripping children from their parent’s arms at the border, and putting those children into chain-link cages. Explanations vary. One senator explained there’s “nothing inhumane” about the process because ”chain-link fences are around playgrounds all over America.” So really the whole thing is pretty much the same as a family taking their kids to the play on the swings, only instead of the family, it’s the government doing the taking and they refuse to tell you where the “playground” is and instead of swings, your child might get to play “Explain to Your Cellmates How To Change a Diaper” because it turns out one of those cellmates has been taken from her parents while literally still in diapers.

Homeland Security Secretary Kirstjen Nielsen tried a novel “Who are you going to trust, me or your own eyes?” approach, insisting in a tweet that ”We do not have a policy of separating families at the border. Period.”

Others, including Trump, claimed that the policy and practice were nothing new, that the same thing had been done under Barack Obama. The current administration, the argument goes, is the real victim in all this, forced as it was to child-snatch by cruel Obama-era policies and intransigent Democrats. That of course is simply not true. Whatever problems America’s immigration system had under Obama, no one in the previous administration was advocating ripping children away from the parents in the hopes of deterring asylum seekers. Certainly no one was trying to use those stolen children as hostages to force Congress to pay for a hugely expensive, utterly ridiculous wall along the Mexican border.

This truth won’t stop congressional Republicans, Trump, his boosters in the media, and his supporters from simultaneously claiming Obama was weak on the border because he was intentionally welcoming dangerous gang members into the country in hopes they’d vote Democrat while simultaneously insisting Obama was exactly as brutal towards immigrants and asylum seekers as the current administration. Defending the indefensible, after all, can take you to some really strange dark places.

People who voted for Trump, if they paid the slightest attention, knew exactly what they were getting. If you elect the birther candidate, and a man who once wanted to see the innocent black teenagers known as the Central Park Five killed so badly that he paid for full-page ads calling for the return of the death penalty in New York in multiple newspapers, you have to know where this is going. You don’t get to be shocked when he starts tweeting about what are in fact your tired, your poor, your huddled masses yearning to breathe free—most of whom happen to be of colour—and saying that they “pour into and infest our Country.”

Trump’s hatred and seemingly genuine fear of people of colour—amid so much artifice—was no less a part of his appeal than his promises of very simple (and simply wrong) solutions to complex problems. That hate was what packed the house then. It’s what packs it still.