Don't buy the hogwash about the release of Kovrig and Spavor

Terry Glavin: The sooner Canada dispenses with tales of 'prisoner swaps' and 'diplomatic triangulation,' the sooner it can have an honest conversation about what this saga revealed 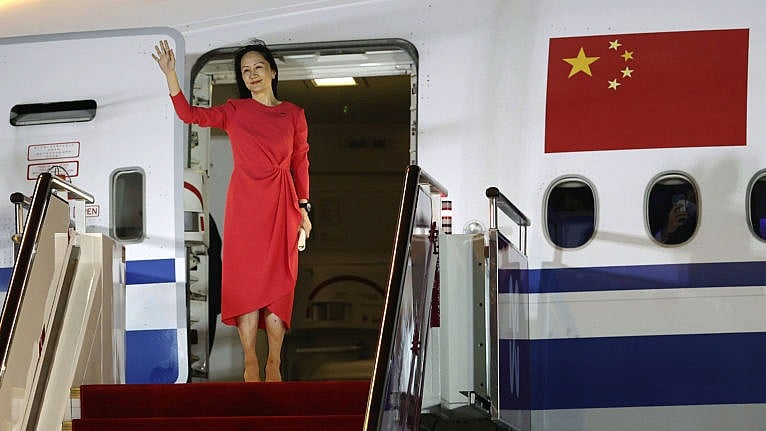 In this photo released by China's Xinhua News Agency, Huawei CFO Meng Wanzhou waves as she steps out of an airplane after arriving at Shenzhen Bao'an International Airport in Shenzhen, China. (Jin Liwang/Xinhua via AP)

The words make for a very snappy headline, but there is a very specific reason why “prisoner swap” is an unhelpful way to report last Friday’s departure of Chinese celebrity heiress Meng Wanzhou aboard an Air China flight from Vancouver to Shenzhen and the simultaneous flight of a Royal Canadian Air Force Challenger jet carrying Michael Kovrig and Michael Spavor from Beijing to Calgary.

It’s unhelpful because it’s not true, and the sooner everybody stops trafficking in this melodramatic concoction, the better it will be for Canadians to have an honest public conversation about what this whole saga has revealed, and how Canada might ensure it doesn’t end up defenceless against Beijing’s gangster-state extortion operations ever again.

It’s certainly easier to pretend that last Friday’s events add up to a story about a hostage exchange. In Canada, the storyline lends itself to network-panelist punditry given over to praise for the Trudeau government’s talents in the diplomatic triangulation of quiet backstairs work in Washington, D.C., tactical kowtowing in Beijing and the enlistment of allies on the “world stage.” In the United States, it allows the Republican Party to shout loudly about U.S. President Joe Biden conniving in squalid expedience to the detriment of vital American interests in advanced technology, intellectual property and what-have-you, and gosh, isn’t it a pity Donald Trump isn’t still around. That sort of thing.

But in the real world, there was no swap. There was no hostage exchange. The truth of it all was explained in plain language over the weekend by Kirsten Hillman, Canada’s ambassador to the United States. Hillman’s job description anticipates she will lather it on a bit from time to time, but it’s not so loose as to allow her to make things up out of whole cloth.

What happened was fairly straightforward.

Beijing had known all along that the Huawei Technologies Company chief executive officer was guilty as charged in that 13-count indictment unsealed in the days following her December 2018 detention at Vancouver International Airport. Meng’s legal team had exhausted a series of absurdly tangential legal manoeuvres in their failed effort to persuade B.C. Supreme Court Justice Heather Holmes to deny the U.S. its extradition request. The jig was up.

So Meng’s lawyers resumed negotiations with the U.S. Justice Department for a deferred prosecution agreement allowing Meng to confess to the charges she was facing without formally pleading guilty. And that’s how it played out, and that’s why Meng was released from her preposterously generous bail conditions and allowed to depart from her Shaughnessy mansion and then from Vancouver International Airport Friday afternoon.

Kovrig and Spavor were clearly hostages—by now we can all stop pretending that this is just a claim various “experts” and “observers” make. They were released on Friday because their imprisonment was simply no longer of any use to Xi Jinping. “As the resolution for Ms. Meng was heading towards success,” Hillman explained, “the Chinese government made its decision. And its decision was that it was no longer in its interest to continue holding the Michaels, and so they started the process in talking to our officials in Beijing about making arrangements to have the Michaels leave.”

Hillman did credit the efforts Canada made to mobilize dozens of United Nations’ member states to sign a kind of petition disfavouring hostage diplomacy—the document didn’t even mention China, oddly—as a factor that could have contributed to Beijing’s motivation in letting the Michaels go. But what about those genius diplomatic operations carried out by Dominic Barton, Canada’s ambassador to China, in and around President Joe Biden’s White House?

The U.S. didn’t make the Michaels’ release a condition of Meng’s deferred prosecution agreement, Hillman said, pointing out—as if it should be necessary to do so—that federal criminal prosecutions in the United States are carried out independently of presidential whim, policy or preference. And there is no unresolved mystery about why the prosecutors with the U.S. Attorney’s Office in the Eastern District of New York would want to cut Meng such slack. What they got out of it was a signed confession confirming, in effect, that Meng has been lying to everyone, including the B.C. Supreme Court, all along—that indeed she did engage in the misrepresentations and cover-ups that the U.S. Justice Department has alleged.

Meng isn’t the only defendant named in the original indictment. So is Huawei itself—Xi Jinping’s global “national-champion” telecommunications and surveillance conglomerate. Also charged are Huawei Device USA and Skycom Tech Co. Ltd., on a variety of fraud and conspiracy charges relating to alleged corporate-outsourcing and bank-transfer deceptions to evade American sanctions in Iran. Those charges remain active. The point of securing Meng’s admissions of guilt was to help make those charges stick.

This was no small achievement. Meng is Huawei’s chief financial officer and the daughter of Ren Zhengfei, Huawei’s founding president, and the Xi regime has pulled out all the stops to explain everything away in an extravaganza of hype and ceremony, casting Meng as a returning hero. “Under the leadership of the Communist Party of China, my home country is becoming stronger and more prosperous day by day,” Meng declared upon her triumphant return. “Without a strong motherland, I wouldn’t have my freedom today.” Hua Chunying, director of China’s foreign ministry information operations, declared: “The news of Meng Wanzhou’s return to China got 400 million thumbs up on the online platform of the China Media Group. . . a number larger than the combined populations of the U.S. and Canada.”

China’s foreign-language propaganda organs were silent about the Michaels’ release until finally settling on this invention: the reason they were allowed to return to Canada was that they were unwell, and it was a humanitarian gesture, completely unrelated to Meng’s return. And in any case they had confessed to being spies, so that’s all that needs to be said about that.

The cast of characters involved in that effort was led by the China-trade dealmaker and former prime minister Jean Chrétien, and included John McCallum, the former cabinet minister and ambassador to China who had to be fired for championing Meng’s legal case. The only thing standing in the way was that around Trudeau’s cabinet table, the unseemliness of their preferred option was judged too politically toxic. After all, the government had been shaken to its core by the SNC-Lavalin scandal, a tawdry interference in the judicial process of precisely the kind Chrétien and the rest were counselling on Meng’s behalf.

But now that the Trudeau government can no longer rely on the Michaels’ captivity to explain away its paralysis in long-overdue decisions related to China’s human rights abuses, Xi Jinping’s disruptions to international norms and standards and Beijing’s deep influences in this country, what will Canada’s policy look like? What lessons have we learned? Will we even get around to officially placing Huawei outside the core of Canada’s 5G internet connectivity, following the lead of Canada’s democratic allies? Are we going to stick with Trudeau’s long-term strategy of deeper and more intimate cultural, economic and political ties with China?

It’s early innings, but the plan seems to be just getting things back on track, back to “normal.” Canada’s policy will be grounded in several “c” words, Foreign Affairs Minister Marc Garneau explained on Sunday: Co-exist, compete, co-operate and challenge. Sounds complicated, and the word “capitulate” was absent, but this is the sort of language the Xi regime and the Trudeau government have been using to define the kind of relationship they want for some long while now. What will change? What lesson have we learned?

Canada’s “eyes are wide open” now, Garneau said. If the expression had a familiar ring to it, there’s a reason for that. Here’s former ambassador John McCallum, on Sept. 22, 2017, more than a year before Michael Kovrig and Michael Spavor were abducted and imprisoned: “We want to pursue stronger ties with China, but with our eyes wide open.”