Scott Gilmore: In the long list of problems facing Canada, multiculturalism doesn’t even make the top hundred. Let's give Bernier's rant a pass. 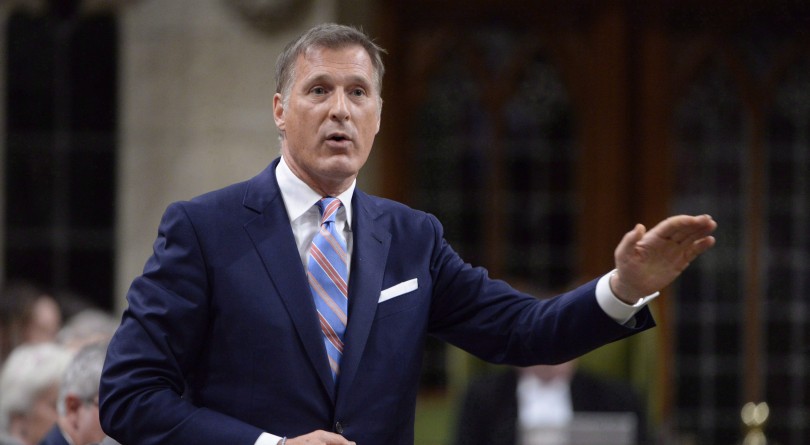 Conservative MP Maxime Bernier is taking issue with Prime Minister Justin Trudeau's oft-repeated message of diversity in Canada, calling it a form of "radical multiculturalism." Bernier is shown in the House of Commons on Parliament Hill in Ottawa on Thursday, Sept.28, 2017. (THE CANADIAN PRESS/Adrian Wyld)

Conservative provocateur Maxime Bernier lit up the lines today after he decried our “cult of multiculturalism.” He tweeted about his opposition to “Trudeau’s extreme multiculturalism and cult of diversity” which he fears will “divide us into little tribes.” As a Canadian columnist, this is the part where I take sides and either double-down by arguing a patchwork quilt is only as strong as its weakest seam, or I wrap myself in that quilt of many colours and call this a racist dogwhistle attack on immigration. Instead, to mix things up a little, I’m going to talk about why we really shouldn’t bother talking about it all.

First, in the long list of problems facing Canada, multiculturalism doesn’t even make the top hundred. A better understanding of the growing popularity of hockey in the Sikh community is not going to deliver better health care to reserves. And in-depth debate about the importance of British culture to Canada’s historic success will not re-open the port in Churchill.

Our decades long multiculturalism debate falls into the category of “One per cent problems”. (I mean that literally—globally, the richest one per cent of humanity earns just over US$32,000 a year. In Canada, our median income is above $53,000.) You know your country is doing well when you’re left debating whether there may be too much support for Bhangra dancing.

There are huge disparities between races in Canada—in fact, I think it is one of our most serious problems. Police are five times more likely to use force on an African Canadian than a white Canadian. And Indigenous Canadians die seven years earlier than the national average. But, with a few notable exceptions, there is almost no tension between cultures or religions in Canada. Tamils are not fire-bombing Sinhalese in Toronto. Irish Catholics are not starting bar fights with English Protestants. Muslims and Hindus don’t harass each other in the streets. I could go on. And while you may roll your eyes at this, in the majority of the world, these things can’t be said.

Maybe it’s all the space. Maybe it’s all the feel-good multiculturalism propaganda and virtue signaling. It could be that it’s just too cold to get argy-bargy up here. Whatever the reason, in Canada, multiculturalism has not increased tensions or decreased patriotism. And, if you think it has, as Bernier may, then you likely come from a part of Canada with almost no cultural diversity, as Bernier does, and simply have no reference points to judge.

Second, and this is the thing that aggravates me, as a vocal libertarian why does Maxime Bernier care? I actually really like many of his ideas. His willingness to take on Canada’s ridiculous dairy cartel is almost uniquely reasonable in a Parliament crowded with economic illiterates and shameless panderers (Note: If your MP supports supply management, they are only one or the other. There is no third option.)

But it’s his lonely defence of libertarian ideals that really warms me to the man. I, like him, believe that for the most part we should all be allowed to do whatever the hell we want, as long as it does not harm others or impose significant costs on society. That means I should be able to marry who I choose, smoke what I want and wear whatever comes natural. If that is an Indonesian sarong, and I opt to wear it to the Highland games, so be it. Likewise, if I decide to wrap myself in all things Bengali—or to march in Pride Parade—or convert to Islam— that’s not for the government to encourage nor discourage.

Maybe there is such a thing as a core Canadian identity. Maybe when I’m wearing flannel and paddling my canoe I make the country stronger. Or maybe I’m just getting myself from one portage to another. I don’t know and I don’t care.

And it’s quite likely this government spends too much time celebrating multiculturalism. But, in practice that means almost nothing. Nothing politicians or bureaucrats can do will increase or decrease the attendance at Folklorama this week.

And yes, our current Prime Minister loves to preen and prose as the progressive princeling, while emoting about “Diversity is our strength”. But he doesn’t know what that even means. None of us do. It is one of those classic political phrases that are so over-used precisely because they are so utterly meaningless. And, when Bernier asks “Where do we draw the line?” the answer is: It doesn’t matter and you (as a libertarian) shouldn’t care. Canadians, as we always have, will decide where the line is on our own.

Honestly, though, I don’t care. Right now, Canada still lacks a functioning navy. Our major trading partner is being led by an erratic con artist. Suicide rates in the north are among the worst in the world. The four hottest years in history were the last four. Opioid deaths increased by 40 per cent last year. I feel these are things that might be worth talking about, even in this lazy August heat. But debating multiculturalism? Again? Let’s give it a pass.