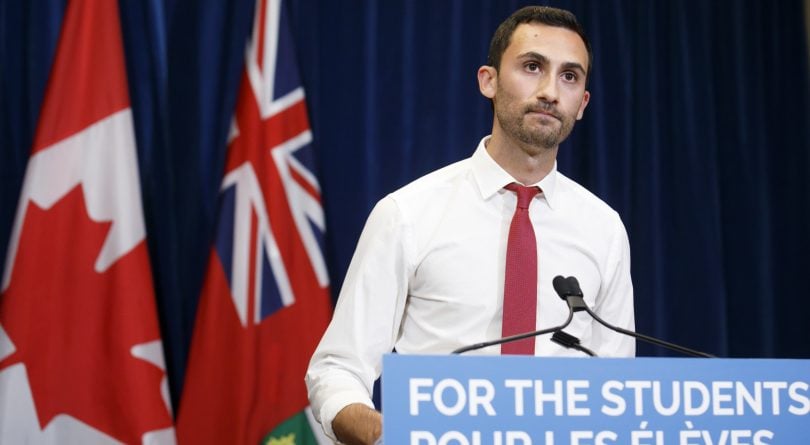 It was largely inevitable that there would be a conflict between Doug Ford’s Ontario government and the province’s teachers. It happened under former Tory Premier Mike Harris, and it’s happened with various right-wing administrations in other provinces. Put simply, teachers are not popular with conservatives, and their unions have been used as scapegoats by conservative governments for decades.

Teachers are considered liberal, and condemned for having long vacations and leaving work at 4 p.m.. The truth, of course, is profoundly different. Because they receive payment for the summer, teachers are paid less for the rest of the year; and their working days certainly do not begin when students arrive at school or end when they leave. Even so, the optics are perfect for the political right, and nobody plays optics and sound bites with such relish as Doug Ford.

Which is why he and his Education Minister Stephen Lecce have offered a subsidy of up to $60 per day to compensate parents for the cost of childcare during the numerous strikes that are taking—or are about to—take place. Such is teachers’ anger at the government’s refusal to listen to their demands that this strike now includes almost every major teachers’ union in Ontario.

The compensation plan is layered and organized, and to the cynic it looks like it may have been organized well in advance of these strikes. Children who are six and younger who attend school-based childcare will receive $60 a day; those in kindergarten, $40 per day; students in grade one to grade seven are to be given $25 per day; and students with special needs $40 per day.

These are arbitrary sums, but what characterizes them is their clear intention: to present the government as caring and under siege, and unions as being hard and selfish. Stephen Lecce made that entirely obvious when he said “While teacher unions are creating hardships for students and families, our government is taking proactive steps to ensure students remain cared for and families supported.” Quite so.

The reality is a little different. Public education is terribly under-funded, the Ford government appears to be far from committed to its long-term health, and this dispute is more about the future of schools than the salaries of teachers. As such, it’s particularly irksome that the government rejects the unions’ demand for more money to be invested into public education, but is willing to pay up to $48 million a day to compensate parents! That is money that could be invested directly into the education system.

MORE: To Doug Ford, being ‘for the students’ means reckless OSAP cuts

It’s also a clear attempt to bribe parents so as to remove pressure on the government, and to divide them in what seems to be their overwhelming support for striking teachers. Parents have walked picket lines and protests along with teachers to show just how supportive they are. That is something that the government doesn’t want to see on the province’s television screens.

Equally worrying, it’s a quite blatant interference in the time-honoured concept of free collective bargaining, a basic right that conservatives with their belief in the free market should support rather than oppose. Of course people suffer in such an action (teachers as well as students and parents), but as regrettable as this may be, the whole point of withdrawing labour is that it’s the only weapon a workforce has, and to be effective it has to exert pressure. If the government can marginalize teachers and give financial inducements to parents, it will make it more possible for Doug Ford and his people to refuse to negotiate in good faith, and perhaps reach a reasonable compromise, which is the only long-term solution to all of this.

The government wants to increase class sizes, wants children to take more online courses, and wants to introduce aspects of the private sector into that online teaching. And it is now willing to spend millions of dollars not to help parents but to try to defeat unions. That’s a deeply sad state of affairs.

The last place teachers wants to be in the middle of an Ontario winter, or any other time for that matter, is demonstrating outside of schools. It’s unlikely that this latest Doug Ford gimmick will be successful, but it goes to the heart of the problem, and no bribe can change that inescapable conclusion. Hey, Premier, leave those parents alone.