Opinion: Now that the Ontario PCs have earned a majority mandate, Ford is set to see through his vow to scrap a 'carbon tax' that isn't a tax—and potentially sue the feds 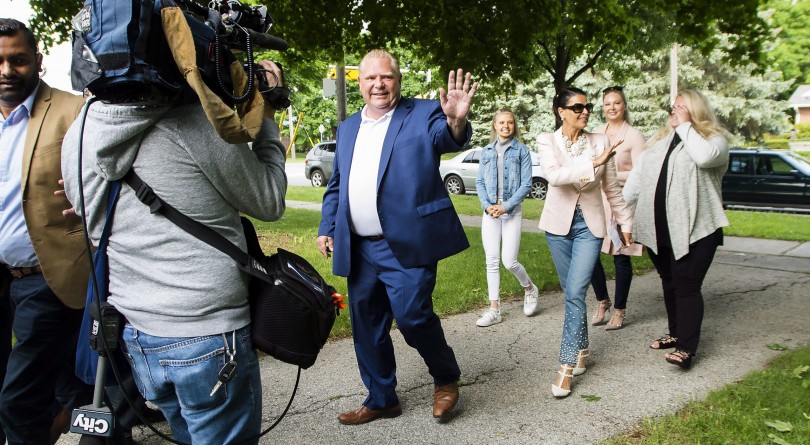 Premier-designate Doug Ford has spent his political career defining himself by what he’s against.

Elites? Doesn’t care for them. Government waste? Take a hike. The media? Not a fan.

There are few things, however, that Ford dislikes more than taxes. And there’s one tax that elicits a particular amount of visceral hatred from the Progressive Conservative leader: Carbon taxes.

He’s promised, over the course of this campaign, to axe the province’s carbon pricing system if he becomes premier He’s called cap-and-trade “the biggest rip-off I’ve ever seen in taxes.” (It’s not a tax.) He’s said it won’t do anything for climate change (which echoes comments from federal Conservative Leader Andrew Scheer.) Ford has also suggested that Ontario’s wealth is being shifted to California under this program. (That’s just not true.) And if he follows through with his promise, it will be expensive, legally fraught, and politically costly.

But the Ford family has never been known to shy away from a challenge, no matter how ill-advised or quixotic. And now that he’s officially set to become the premier of Ontario—his Ontario Progressive Conservatives having been handed a majority government—it seems unlikely this feat will be any different.

Ford’s dogmatic crusade against the province’s carbon tax—he kicked off his campaign for leader of his party with a full-throated attack on the pricing scheme—is, of course, fundamentally flawed. Ontario doesn’t have a carbon tax, it has a complicated cap-and-trade system — a nuance that was lost from Ford’s messaging from most of the campaign. (His party website still refers to it as a “carbon tax” but, oddly, also refers to the supposed “cap-and-trade slush fund.”)

It’s an important distinction. . Ontario’s carbon pricing system works by allocating credits, representing a certain amount of carbon emissions, to industries across the province. If a company emits more CO2 than they have credits for, they must go buy more. If a company doesn’t need all of its credits, it can sell the leftovers. The credit trading system works through a continental market that includes, at least for the time being, Quebec and California.

The fact that it’s not a tax also means that it won’t be as simple for the new Ontario PC government to just end it. The government sells most of the credits, meaning the revenue goes directly into government coffers, funding various climate-change programs and policies (the so-called “slush fund.”) Other revenue is swapped between companies. By eliminating the entire cap-and-trade system, you’re removing a cost for some businesses, yes—but also a revenue source for others.

Ford has sworn that his plan for the province will lower Ontarians’ taxes without reducing services or laying off any public employees. But getting rid of the so-called “slush fund” would result in exactly that. The cap-and-trade auctions are expected to be earning the government somewhere in the ballpark of $1.5 billion a year to fund government programs (apart from any transfers between corporations.)

But here’s the thing: That money is funding, among other things, the Green Ontario Fund. That fund helps subsidize green renovations and retrofits for homeowners and underwrite emissions reductions programs for industries. That money wasn’t, as Ford loved to say, just being dumped into a pit.

We also know the cap-and-trade system works. California expects that between 2013, when the program came into effect, and 2030, the system will reduce emissions by some 40 per cent in the industries that fall under the program. Quebec and the European Union have also reported positive effects from their own system. It is true, as Ford has said, that the price-per-credit will increase beyond its current prices—but that’s the point: The increase will be gradual, so as to meet Canada’s ambitious CO2-emission reduction goals.

And Ontario ought to be trying to meet them. Without any sort of carbon-pricing system, and with Ford’s pledged 10-cent cut to the gas tax, expect Ontario to barrel past those targets.

As if axing the system wouldn’t be difficult enough to do given Ontario’s economic interests, there’s also the inconvenient fact that federal legislation requires Ontario to maintain carbon pricing. The legislation even has language that mandates the federal government to impose carbon pricing on any province that refuses to adopt the national price. Fret not, though, as Ford has a plan: He’ll just sue Ottawa. He’s even pledged to spend $30 million for the legal fight.

It’s not a particularly novel idea. The government of Saskatchewan has promised to do as much. Jason Kenney, the odds-on favourite to be the next premier of Alberta, swears he’ll do the same.

Between this triumvirate, there may well be a reference question to the Supreme Court of Canada. But that challenge won’t succeed.

Look no further than Canada’s Constitution Act of 1867. Section 91 gives Parliament jurisdiction on “the raising of money by any mode or system of taxation” as well as the regulation of trade and commerce. The province, under section 92, has exclusive authority over “direct taxation within the province in order to the raising of a revenue for provincial purposes” — but the national pricing strategy allows for exactly that.

Those legal nerds out there know that we’ve already been through this fight. In 2010, former B.C. Premier Bill Vander Zalm challenged the Harmonized Sales Tax as a federal system imposed on the provinces. That challenge was quashed by the Supreme Court of B.C, which concluded the HST was “constitutionally sound from the perspective that it represents a tax for national purposes with hopes of a stronger economic foundation and the achievement of administrative efficiencies among its objects.”

But just because the war’s  going to fail doesn’t mean Ford won’t fight it.

That may well be a theme of Ford’s administration. He is a vehicle for his supporters’ frustrations — some genuine, some whipped up by his own campaign. When he ultimately fails, he’ll have one person to blame: Prime Minister Justin Trudeau.

In so doing, Ford will create an undercurrent of distaste for a legitimate and useful public policy lever. While other conservative parties across the country have accepted the need to fight climate change, and have recognized that carbon pricing is the most effective market solution to do so, Ford and his ilk have instead decided to dynamite the bridge.

Ontario is Ford Nation now. But Ford will still have to learn that he’s not exempt from the constitution.