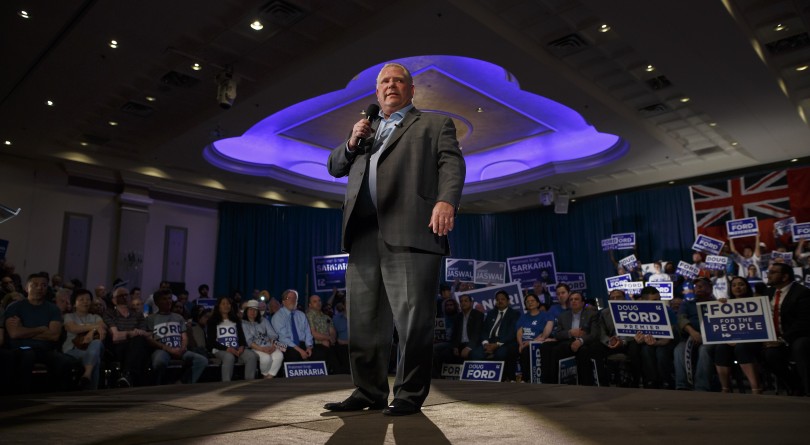 Doug Ford, Progressive Conservative Party candidate for Ontario Premier, speaks during a campaign rally in Mississauga, Ontario, Canada, on Wednesday, May 16, 2018. Ford, who's campaigning to "take back" Ontario with an agenda to shrink government and reduce spending, is the brother of the late scandal-plagued Toronto mayor Rob Ford. Photographer: Cole Burston/Bloomberg via Getty Images

Well, then. It’s about to get interesting for Team Ford.

As long as Patrick Brown’s dodgy nominations were the ones in the media’s line of fire, Doug Ford could get away with blaming the ancien régime. But with a new report out alleging the PC leader’s personal involvement in a nomination tussle in Etobicoke, it’s Ford who’s now the target.

The story alleges that scores of new party members were signed up improperly and then bussed to Etobicoke Centre, where they marked their ballots for Ford favourite Kinga Surma, the eventual winner. Some new members even suggested to others present at the meeting that Ford had covered their memberships, which is a clear no-no according to party rules.

The story goes on to note the Ontario PC Party conducted an investigation into the allegations at the request of Pina Martino—the former Brown staffer who lost to Surma—and found no reason to overturn the nomination. The Ontario Liberal Party piled in on Thursday, releasing an affidavit from Martino documenting the allegations, along with an audio recording it says implicates Ford in “bogus” membership sales. “It doesn’t cost ya anything,” Ford is allegedly recorded as saying.

Of course, if true, the report is merely Ford’s turd re-packaged—but now it’s his alone to polish. The fact that every party occasionally places their fingers on the scales of nomination justice won’t cut it. If cash was spent signing up so-called rent-a-members, that charge sticks. Thanks in part to his haste in hoisting Brown, Ford now finds himself sharing the same petard.

The current line from the Ford campaign is that it’s all old hat and Surma is “a strong candidate” who will be “an excellent representative for the people of Etobicoke Centre.” We’ll have to see how that holds up. Having worked directly for or with much of the Ford campaign team’s senior leadership, I predict no quarter given in what is sure to be a series of testy exchanges with the press.

What will this revelation mean for the campaign? It’s not likely to dent Ford’s dedicated support, but with reams of Liberals defecting Andrea Horwath’s way, the taint won’t do anything to soften Ford’s negatives with undecided voters—which are already at 49 per cent—or do much to motivate the swathe of PCs who would have preferred Christine Elliott or Caroline Mulroney in charge.

With smoke filling their backyard, the Tories will now up the fire being directed toward Horwath and the NDP, which have either taken the lead or are in a solid second place, according to recent polling. The challenge now for the PCs will be figuring out how to present Horwath’s proposals as an amplification of the failed—and expensive—policies of Kathleen Wynne. Fortunately, there’s a rich vein of material. To pick one example, Horwath has admitted she would never use back-to-work legislation to end a strike. Now, Wynne might have given in to too many unions, but at least there was the illusion of a different outcome. Here, Horwath is proposing to place herself permanently over the barrel, and it doesn’t take much imagination for the average voter to envision how expensive that would be. And then there’s Horwath’s desire to make Ontario the sanctuary province attached to Justin Trudeau’s unlimited welcome mat for illegal border crossers.

But making a substantive case against Horwath in this way will require a level of sophistication not typically associated with Doug Ford. Nor will it be easy to make under constant barrage from the press, which Ford will be as long as he stonewalls legitimate questions about his actions in Etobicoke Centre as mere “desperation” from the Liberals.

In sticking by Surma, Ford is contradicting his pledge to take tough action on fishy nominations. A clean (and dated) bill of health from the fox on the status of the henhouse isn’t enough. If the press keeps on the issue, which they will, there’s a good chance “the people” Ford is fond of sticking up for will notice their man’s hypocrisy.

“We’re going to review every single nomination,” Ford said when he took over the leadership from Brown in March. “There were a lot of ones that weren’t transparent. That’s disturbing, to say the least.” Chances are Ford wasn’t referring to his own alleged actions in Etobicoke Centre, but there’s no doubt the same standard should apply to Ford as applied to Brown.

With their leader on the hot seat, it could well be time for the rest of the team—Elliot, Mulroney, Vic Fedeli, and others—to step up and carry the message. After all, the strength of Ford’s bench should be one of the main reasons for voters to trust the PCs over the NDP as the party of change. Right now, however, the PCs are losing that fight to Horwath and her relative unknowns.

De-emphasizing a leader is a big call for any campaign to make, and a lot of time and effort has been spent making the campaign Doug-centric. Following the leader is a strategy that works when that leader is firing on all cylinders, but it can be disastrous when the principal steps in it. But for the PCs, these new revelations suggest that avoiding another bruising electoral disappointment might just depend on having the confidence to spread Ford’s weight around.