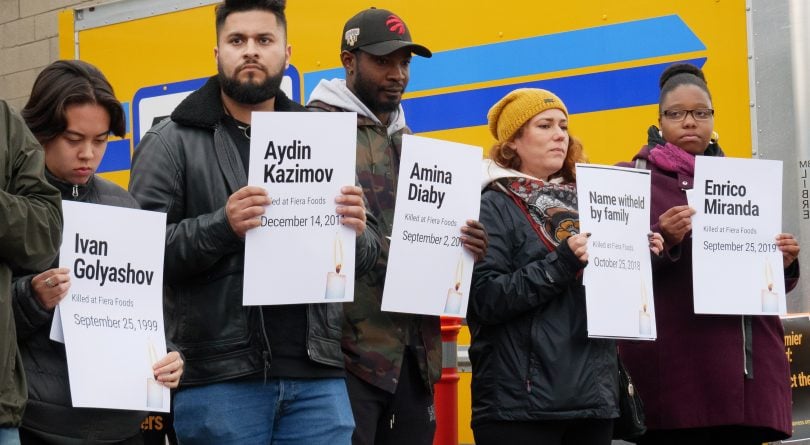 (Fight for 15 and Fairness)

Deena Ladd is the executive director of Workers’ Action Centre, a worker-led non-profit in Toronto committed to improving the lives of people working in low-wage and unstable employment.

On Oct. 16, we were occupying Ford’s constituency office in Etobicoke when I was arrested along with seven other community and labour leaders. Our crime? Urging the premier to put existing legislation into effect; legislation that could have prevented the deaths of two temporary agency workers who were killed on the job during Doug Ford’s tenure.

All eight of us were devastated when, on Sept. 25, the fifth temporary agency worker was killed at Fiera Foods, an industrial bakery that supplies baked goods to retail giants like Walmart. Enrico Miranda, 57, was crushed to death by a machine he was cleaning. Less than 12 months earlier, we had organized vigils for another temporary worker, whose name has been withheld according to the family’s wishes. This victim died on the job at Fiera Foods’ sister company, Upper Crust. At the time, Ford had already been premier for four months; he ignored  pleas to implement the existing provisions of the Workplace Safety and Insurance Act (WSIA) to better protect workers like Miranda.

To make companies that hire through temporary worker agencies directly responsible for workplace deaths and on-the-job injuries, the Wynne government created new regulations under WSIA, titled Section 83(4). Section 83(4) ensures that companies hiring temp workers through agencies are held financially responsible under the Workplace Safety and Insurance Board (WSIB) for injuries sustained at the hands of the employer. While these regulations were drafted by Wynne’s government, they were not put into effect as the Ford’s Conservative government came to power. Thus the table is set for the premier to give the green light and put Section 83(4) into effect.

Enrico Miranda was a father and a grandfather; he was also a highly trained professional (an engineer), who was forced to work for agencies because his credentials and work experience were not recognized in Canada. And despite the “temporary” label, he had been working at Fiera Foods for five years. There, he had no choice but to deal with low wages, job insecurity and lack of benefits.

Heavy with grief and anger, Workers’ Action Centre organized a community rally on Oct. 2 to support the workers at Fiera Foods while also calling on the premier to take action. Ford’s response? Nothing.

The following week, we issued an open letter to the premier, signed by me, Chris Buckley (President of the Ontario Federation of Labour), Pam Frache (Provincial Coordinator of the Fight for $15 and Fairness) and Butterlfly GoPaul, (Jane Finch Action Against Poverty). Again, we urged the premier to move immediately on Section 83(4) of the WSIA to prevent further workplace deaths.

This really matters, because for as long as companies are not liable under WSIB for temp worker deaths and injuries, they don’t have any real incentive to keep their workers safe. It is no coincidence that all five workers killed at Fiera Foods were temp agency workers

According to the Toronto Star’s 2017 investigation that first put a spotlight on the abusive conditions faced by workers in corporations such as Fiera Foods, the majority of Ontario’s temporary agency workers are no longer in offices, but in non-clerical industries like manufacturing and construction. “In fact, the injury rate for temps in non-clerical workplaces has consistently been close to double that of other comparable sectors for the past 10 years,” authors Sara Mojtehedzadeh and Brendan Kennedy wrote in their story.

Fiera Foods has continued with business as usual, maintaining a pristine WSIB record, despite being slapped with individual fines by the Ministry of Labour after the death of each worker. The most recent fine of $300,000, was issued following the death of Amina Diaby, a 23-year-old who was killed in September 2016, after a conveyor belt caught a piece of her clothing, entangling her in a machine. Documents obtained by the Star from the WSIB later showed the machine’s safety guarding was inadequate, and that neither Diaby, nor her co-worker who was with her at the time of her death, had received training about the location or use of emergency safety buttons.

It took 21 days for Ford to simply acknowledge the death of Enrico Miranda, and he did so only after being questioned at a press conference the day that hundreds of people were rallying outside his office. Indeed, if it weren’t for this public outcry, I wonder if the premier would even have acknowledged that five temporary agency workers have died on the job at Fiera Foods? (Two under his watch.) These tragedies are the real-life consequences of labour laws that fail to protect Ontarians.

It is clear that a singular fine under the Health and Safety Act after a worker dies is not a deterrent for bad bosses; to them it is simply the cost of doing business. Implementing Section 83(4) is the only right thing to do. And Premier Ford has the power to act now.

But it’s only the first step in better protecting temp agency workers: the government can make this kind of work truly temporary by ensuring that companies directly hire temporary agency workers after three months of employment; it could ensure that no more than 20 per cent of a company’s workforce is hired through temp agencies; and it could prevent temporary agencies from charging corporations fees when they want to hire the worker directly. These changes would go a long way to ensure the safety and wellbeing of workers across the province.

How many more temporary workers will die on the job before the premier does the right thing?