Tabatha Southey: What's interesting about Ontario's new licence plates is that after sunset, or when caught in headlights, they do not perform the one task a licence plate has, traditionally, been designed to perform 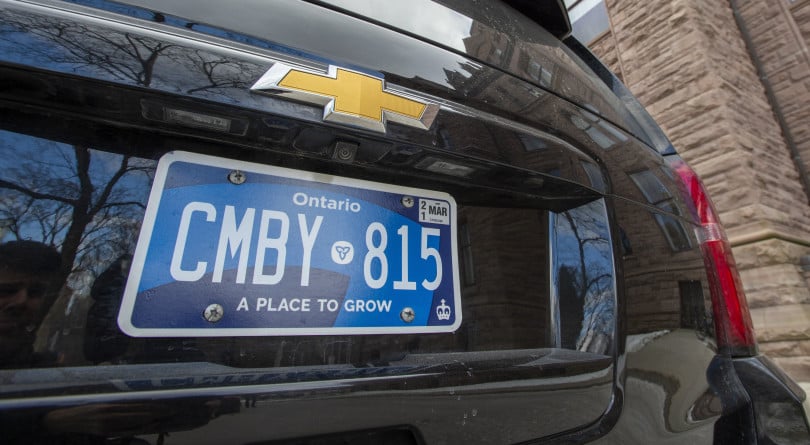 Well, the rest of Canada, here’s where we’re at in Ontario right now: I thought I should give you the lay of the land in case any of you were planning on visiting us this summer.

First off, if you pack up the kiddies for a road trip, you’ll be driving over the provincial border past our “Open For Business” billboards. Those are the signs Premier Doug Ford erected when Ontario up and elected the Conservatives to power in what poll numbers now suggest was something of a brief electoral fling (the Liberals were blasted into near oblivion in that election but, despite being leaderless, they have popped right back up Weeble-like,) that should probably stay in Vegas.

There’s not much lonelier or sadder than those “Open For Business” signs, which were apparently designed on the principle that nothing encourages investment in a province quite like ennui. Those are the signs of a vacant, spooky province that has space in its life for a reason. Those signs are the eyes you avoid at a house party. Those signs won’t make a confident business say, “This is the place I want to set up shop.” Those signs make a business look nervously at its phone and say, “Oh, I think that’s my Uber.” These signs are taxpayer-funded roadside sad Facebook statuses.

Please make sure your child has a fresh colouring book when you approach those signs. You don’t want their “What I Did on My Summer Vacation” essay to read, “Died a little inside.”

The signs are old but we have some news in Ontario and I think it’s big. This month, Ontario launched its new vehicle licence plates and what’s interesting about these new plates is that they cannot be read at night or in bright light. That’s right, after sunset, or when caught in headlights—as can happen to a hapless licence plate—these plates do not perform the one task a licence plate has, traditionally, been designed to perform.

For days after this seeming design flaw was pointed out, Conservatives stuck by their plates. On Tuesday, Minister of Government and Consumer Services Lisa Thompson insisted that there are no issues with the new plates which are, she said, “actually very readable.

“I’m sure everyone here today would agree with me, wholeheartedly, that the status quo, the flaking and peeling Liberal plates”—the ones that, apart from moving production to 3M, which the current government has kept on, are identical to the version brought in under Mike Harris’s Conservative government—“were not an option to stick with.”

“We have gone through a rigorous testing program with our stakeholders to ensure that the new plates for Ontario are durable, are absolutely reflecting the key information that the people need to be seeing,” Thompson said.

No moles could be reached for comment on their rumoured involvement in this testing process. Although to be fair to the minister, the signs, while they may not be reflecting much information, do reflect enough light that experts now recommend anyone driving behind a vehicle registered in Ontario wear appropriate protective eyewear.

Neither man nor machine can hope to read the characters on the new plates. This grants cars a level of anonymity not usually considered desirable in a vehicle travelling at 100 kph or so. Indeed, police were among the first to express concern about the plates. As whimsical as requiring officers to hold licence plates over a candle to reveal the secret ink every time they go to give a traffic ticket might sound, it turns out they are not really looking to have an element of mystery be added to this part of their job.

Theologians are already furiously debating whether a sin committed in a vehicle fitted with one of the new licence plates is visible to God.

The plates are blue, very blue, Conservative blue, with white letters on a blue background. There is a pointless random swirl thing going on. It gives the impression that someone (who really likes blue) has absentmindedly run a paint roller over your licence plate but presumably it is intended to give the impression of “dynamism.”

I’m not saying every new licence plate in Ontario is a Progressive Conservative Party of Ontario campaign sign, but if I saw one stuck into my neighbour’s lawn, I’d assume that AGHT 784 had their full support and that AGHT 784 has some very unfortunate opinions about wind power and sex ed.

On Thursday, the party did an about face on the partisan plates they’ve served up to the province. “Are the licence plates a problem? Absolutely,” Conservative House Leader Paul Calandra told reporters, while saying that the current licence plates will not be pulled from Service Ontario Centres and “are still being issued.

“We’re working with 3M [who manufactured both the new plates and the apparently fatally flawed older model] to solve the problem, any plates that are out there will have to be replaced,” he said and at a glance this would be one in a long series of Doug Ford self-owns. It’s tempting to file this episode alongside the mandatory on pain of heavy fine anti-carbon tax gas pump stickers that peeled off if you looked at them funny, or looked at them normally, or carefully averted your gaze.

The Conservatives’ Ontario Autism program deserved only to be rolled out of a clown car, and the teachers are on strike. At least $231 million has been spent cancelling 800 renewable energy projects. This government lost $42 million selling weed when one would think weed and stickers would be the two things Doug Ford could manage, but is this plate debacle really a failure?

When Minister of Government and Consumer Services Bill Walker announced the new plates last April, he said, “We are renewing the licence plate and driver’s licence because it represents how we are renewing our entire approach to government,” and when you look at it that way, this government has finally scored a home run.

Once you understand that the purpose of these new licence plates was never, in fact, to identify vehicles or their owner, everything looks different. Once you realize that these plates were designed only to embody Conservative governance under Doug Ford, then the completely unnecessary, entirely avoidable, implausibly denied and totally self-inflicted shambles we’re witnessing starts to look like near-genius.

These plates perfectly represent how Doug Ford’s government is “renewing” its “entire approach to government” as only something that didn’t need to be done, that inspired ridicule, that’s costing us a lot of money, that we’re stuck with them for now and that we really need to replace could do. It’s rare that any government-commissioned project goes off without a hitch like this one.

My apologies, Doug Ford, you nailed it.