Opinion: Ford's question to Wynne about when she lost her way didn't get much attention from pundits, but it clearly haunted the Premier, who might be asking the same of her government 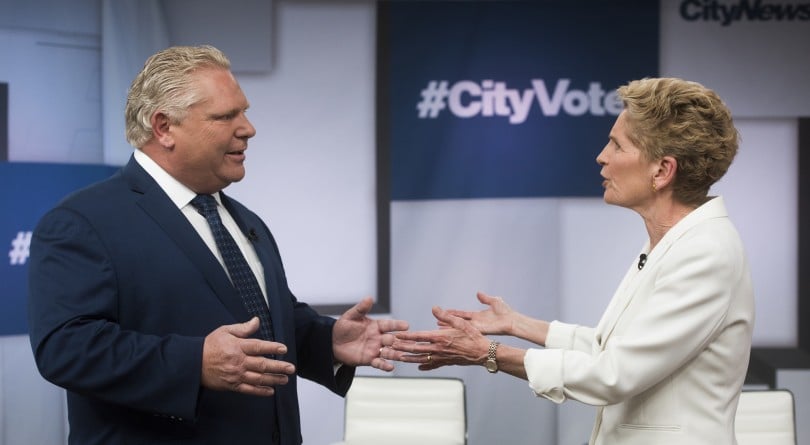 (L-R) Doug Ford, leader of the Progressive Conservative Party of Ontario and Kathleen Wynne, leader of the Ontario Liberal Party during the CityNews first televised debate ahead of this year's Ontario provincial election held at City studios on May 7, 2018 in Toronto. (Marta Iwanek for Maclean's)

Never let them see you sweat. Keep a stiff upper lip. You gotta roll with the punches. Like athletes, politicians subscribe to aphorisms that place a premium on burying weakness.

Nobody around Queen’s Park disputes Kathleen Wynne is a warrior. The premier replaced Dalton McGuinty during the Liberals’ darkest hour—when the government was buried under the rubble of Ornge Air, gas plants, and angry teachers—and converted a tired minority into a majority government. So when you see Wynne sweating, with her lip quivering and guard down, you know she’s hurt.

And it was a comment from Ontario PC leader Doug Ford that done it. “I truly believe you got into politics for the right reasons,” Ford said to Wynne during the first televised leaders’ debate. “When did you lose your way?”

READ: Ontario election 2018 platform guide: Where the parties stand on everything from hydro bills to taxes to transit

The line about the reliability of the premier’s GPS didn’t feature prominently in the pundits’ post-debate hot takes. But it clearly haunted Wynne, who referenced it multiple times the following day, including in her final speech to the legislature before the writs were drawn up for June’s election. “I’ve never lost my way,” Wynne insisted to her fellow MPPs, before reminding them of all of the bad stuff former premier Mike Harris did to Ontario that prompted her to get involved in provincial politics in the first place.

But Ford’s question has the feel of one Wynne has asked, if not of herself, then of her government, as it struggles with its own McGuinty-esque list of troubles, including a protracted game of hide-the-deficit with the auditor general. Writing off billions of dollars of debt and deficit to “accounting disputes” while defending multimillion dollar salaries for hydro executives can’t be why Wynne got into politics. It’s not why anyone gets into politics.

How it’s all come to this isn’t Wynne’s fault, at least not hers alone. The premier is suffering from the accumulated sins of a government that has overstayed its welcome. But the sins are now her responsibility alone, and the premier knows it’s currently beyond a majority of Ontarians to let her have another go so she can atone for them.

This majority includes a fair number of Liberal supporters, who will have also felt the sting of truth in Ford’s query. It takes a lot of effort to motivate your troops to return you to office for a fourth time, and the PC’s will want to avoid giving any demotivated Liberals a reason to get off the couch and vote.

That’s why there was an art to Ford’s jibe, which came at the top of a segment and clearly wasn’t improvised. Too nasty and it wouldn’t have sold, especially when Wynne has spent every single minute of the past few weeks labelling Ford a Trump-like leader of the Mongol hordes. The sincerity of Ford’s “I truly believe” set-up line, whether faux or not, was the perfect intro to the “lost your way” closer. It was tough, but fair.

This moderate PC approach forces the Liberals further into negative territory. Losing government sucks to begin with, but losing it to Doug freaking Ford and his merry band of budgetary axe swingers grates like an overpriced and under-ripened avocado. If the Grits can’t motivate their base with the appropriated NDP policies of their last budget, they’ll keep playing to the Ford fear factor.

All aboard, then, as the Liberals and their online proxies aim their fire, true or otherwise, on the dearly departed Tanya Granic Allen and her social conservative ilk, Stephen Harper’s health-care record in government, and the unspecified cuts Ford will have to make because of sustained Liberal overspending.

For his part, Doug Ford has to keep up the (forced) bonhomie of his inaugural debate appearance, while continuing to brush off the small missteps native to any campaign, like the embarrassing revelation that a local campaign paid to have actors cheer him on. The people are ready for a change; at this point it’s about giving them a plausible alternative.

There’s not much to argue in any of that. Now it’s time to see if Doug Ford can take it one day at a time, give it 110 per cent, and grind out a result.